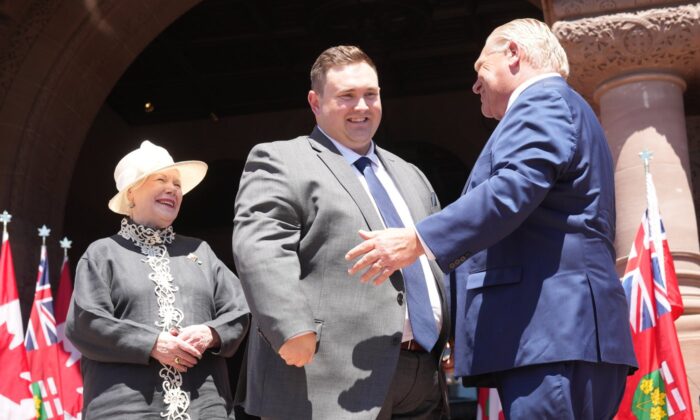 Minister of Citizenship and Multiculturalism, Michael Ford poses with Premier Doug Ford as Lieutenant-Governor of Ontario Elizabeth Dowdeswell looks on, at the swearing-in ceremony at Queen’s Park in Toronto on June 24, 2022. (The Canadian Press/Nathan Denette)
Canada

Ontario Premier Doug Ford defended his decision Monday to name his nephew minister of citizenship and multiculturalism, saying the newly elected legislator has spent years representing one of the most diverse communities in the province.

Ford was asked about the appointment in a joint news conference with Toronto Mayor John Tory—his first time taking questions since he introduced his new, 30-person cabinet last week.

The premier said his nephew Michael Ford has “extensive experience,” having previously served on Toronto city council and as a school trustee.

“I think he’ll do an extremely good job,” Doug Ford said Monday. “He has a lot of knowledge and he’s been an elected official probably longer than more than 60 percent of our caucus.”

He noted the ward his nephew represented on city council, Etobicoke North, is “probably one of the most multicultural areas in the entire province.”

Tory, who worked with Michael Ford when he was on council and appointed him to the police services board during that time, described him as “thoughtful” and “hard working.”

“He does understand his community as well as anybody else, and it is one of the most multicultural communities in all of Toronto, if not all of Canada,” he said. “So give him a chance.”

The cabinet presented Friday has many ministers in the same roles they held under Ford’s last government, including in key files such as housing and education.

Among the changes was the appointment of former solicitor general Sylvia Jones as deputy premier and health minister.

There were also a few new faces aside from Michael Ford, including Michael Kerzner, a bioscience and technology entrepreneur elected in York Centre named Solicitor General, and Graydon Smith, the former mayor of Bracebridge, Ont., who will serve as minister of natural resources and forestry.