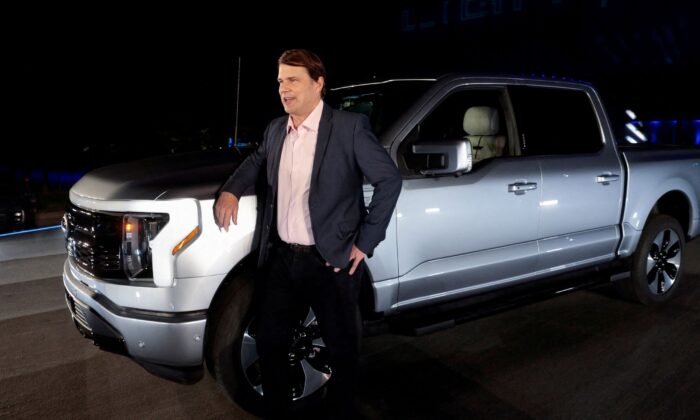 Ford CEO Jim Farley poses with the all-electric Ford F-150 Lightning pickup truck during the unveiling at the company's world headquarters in Dearborn, Mich., on May 19, 2021. (Rebecca Cook/Reuters)
Companies

Ford is cutting down production at eight factories starting Feb. 7 as the company recently warned that a shortage of computer chips would cause a fall in vehicle volumes for the first quarter of 2022.

Production at plants in Chicago, Michigan, and Cuautitlan, Mexico, will be suspended, according to Reuters. At factories in Kentucky, Louisville, and Dearborn, Ford plans to reduce schedules or even run single shifts. At the Oakville factory in Canada, Ford is looking at getting rid of overtime. At a plant in Kansas, Ford aims to scale down production of its F-150 pickup trucks while one shift will be dedicated to Transit van production.

Ford representatives did not respond to a request for comment by press time.

Just a day earlier, the Dearborn automaker had released its fourth-quarter 2021 earnings (pdf). As it missed Wall Street expectations, shares of the company fell on Thursday trading. The share, which hit a high of $20.61, closed the day at $19.89, a decline of around 3.61 percent. The stock price is down by 17.5 percent year-to-date.

The Q4 2021 results showed a revenue of $37.7 billion, net income of $12.3 billion, and adjusted earnings before interest and taxes of $2 billion. The manufacturer stressed the importance of electric vehicles in the company’s lineup moving forward, claiming the number two position in the country for the category.

“We’re also proud that customers see how Ford is taking EVs mainstream, and have already ordered or reserved more than 275,000 all-electric Mustang Mach-E SUVs, F-150 Lightning pickups, and E-Transit commercial vehicles—and we’re breaking constraints to deliver every one of them as fast as we can,” said President and CEO Jim Farley in the report.

In 2021, Ford sold 3.94 million wholesale vehicle units in the United States, down by 5.8 percent compared to 2020’s 4.19 million, while the company’s market share decreased from 5.8 percent to 5.1 percent year-on-year. The shortage of semiconductors played a big role in the production decline. The chip shortage has forced the company to cut off production for even its high-demand models like the F-150, Bronco, and Mach-E.

Despite projecting a decline in vehicle volumes for Q1, Ford predicts the volume to increase quite significantly in the second half of the year, as it sees the global semiconductor supply situation improving by this time.

In an interview with Fox News, John Lawler, chief financial officer at Ford, stated that a boost in production can bring down car prices that have been rising due to inflationary pressures. The spread of the Omicron variant of the CCP (Chinese Communist Party) virus and the chip shortage made things difficult for the company in the last quarter of 2021. “We just weren’t able to reach the higher volumes that some were expecting,” he added.

Other car brands have also seen lower sales for the opening month of the year, with big names like Honda, Mazda, and Volvo suffering double-digit dips. Toyota and Subaru also registered lower sales. Brands that saw sales increase in January include Hyundai and Genesis.