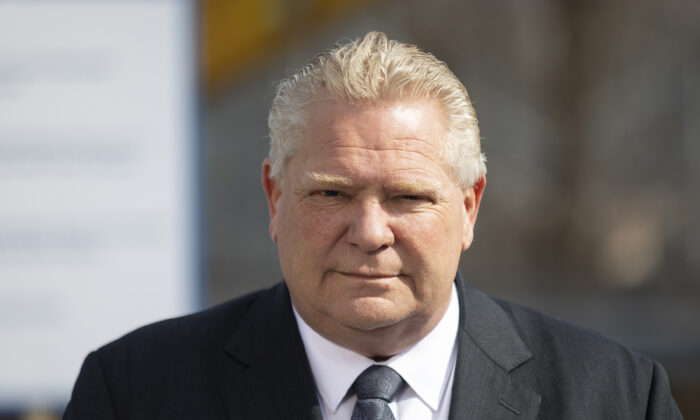 The Ontario election campaign has kicked into gear with parties holding events, picking slogans, launching campaign ads, and presenting their candidates ahead of the June 2 vote.

While incumbent Doug Ford’s main challenge will come from the left, new faces on the right could pull away traditional Ontario Progressive Conservative voters.

Ford released a campaign ad on March 26 in which he introduces his slogan “Get it done” and is shown visiting communities and workplaces.

His Ontario PC party hasn’t yet released a platform, but on Twitter on March 22 Ford signalled his intention to build the “roads, highways and public transit needed to unlock our full economic potential and keep our province moving forward.”

Ford has also made major announcements in recent days, such as the $10-a-day child care deal with the federal government worth $13.2 billion, and the breaking of ground for the Ontario Line subway system.

The Ontario NDP, which currently forms the official opposition, will be hosting an outdoor campaign event in Toronto on April 3, to be attended by party leader Andrea Horvath.

The NDP’s website features a number of issues likely to make it into its platform, such as raising the minimum wage to $20. Ford’s government recently increased the minimum wage from $14.35 to $15.

The former ruling Liberals, now headed by Steven Del Duca and holding just 7 out of 124 seats, held an event in Toronto on March 26 and has unveiled the party’s economic platform. Promises include raising the minimum wage to $16, providing 10 paid sick days per year for all Ontario workers, and banning underpaid gig and contract work.

The indoor event was packed, and some pointed out how nobody wore a mask. The mask mandate in Ontario ended on March 15, and while Del Duca said he accepts the advice of Ontario’s chief medical officer, he said in a March 9 statement that he opposes the lifting of mask requirements in schools.

At least four Liberal candidates took to Twitter after the event to apologize for not wearing a mask, despite not being required to wear one. The federal Liberals also still wear masks during House of Commons sittings even though they are not required to by House rules.

Independent MPP Roman Baber, who was expelled from the Ontario PCs for challenging restrictive COVID-19 policies, is now competing in the federal Conservative Party leadership race.

Belinda Karahalios, another MPP expelled from the Ontario PCs for challenging the pandemic-related extension of emergency powers in July 2020, is running under the banner of the New Blue Party, which is led by her husband, Jim Karahalios.

The party says it has candidates in 118 of 124 ridings, and it’s taking a stance against big government and left-wing ideologies.

“It’s time to get our province working again by empowering individuals, strengthening our democracy, defending taxpayers, promoting small businesses, and standing up for faith and families.”

The Ontario Party, a social conservative party formed in 2018 whose slogan is Freedom, Family, and Faith, is headed by former Conservative MP Derek Sloan, who was expelled in January 2021 by then-leader Erin O’Toole.

Sloan ran for leadership of the Conservative Party in 2020 and competed unsuccessfully as an independent candidate for an Alberta riding in the federal election in September 2021.

The Ontario Party currently has one seat in the legislature, which is held by Rick Nicholls, another MPP expelled from the Ontario PC, in his case for refusing to get vaccinated against COVID-19. Nicholls began sitting as an independent in August 2021. He subsequently joined the Ontario Party in December.

“They’re pro-family, they’re pro liberty,” he told CBC at the time. “That was one of the main reasons why I chose to attach my name to them and join the party.”

The Ontario Party says it currently has over 70 candidates for the upcoming election. Former Freedom Convoy spokesperson and military veteran Tom Marazzo is running in Peterborough-Kawartha.

Outspoken independent MPP Randy Hillier had formed the Ontario First Party in December 2021—essentially the provincial affiliate of the federal People’s Party of Canada (PPC)—which was later rebranded as the Populist Party of Ontario (PPO). However, Hillier isn’t running for re-election. and the PPO is also not a registered party.

Hillier was involved in the Freedom Convoy protest movement and has been charged with a list of offences. He was released on March 28 on bail with conditions, including a prohibition on commenting on social media about mask and vaccine mandates.

PPC leader Maxime Bernier said in December that the Ontario conservative parties should join forces and unite against Ford, but this did not materialize.