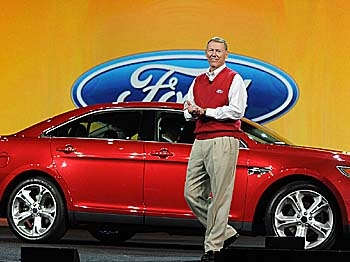 Antonio Perez
View profile
Follow
biggersmaller
Print
The stars of the Consumer Electronics Show in Las Vegas this week wasn’t Sony or Google. Ford Motor Co. announced at the event new car features that could revolutionize how drivers interact with their cars and the outside world.

Ford is introducing MyFord Touch, an evolution of the popular SYNC system. The information-media-entertainment console will streamline the car’s navigation, climate controls, media/audio controls, voice command, and Internet into a one touch-screen system.

So far, the interface contains a web browser and supports Twitter feeds and HD radio.

The Dearborn, Mich.-based automaker plans to run the system in 80 percent of its vehicle offerings by 2015. This year, the MyTouch system will be available in the Ford Edge, Ford Focus, and Lincoln MKX models.

"MyFord Touch, combined with new SYNC functionality, creates an experience that will cause people to fall in love with their vehicles again," said Derrick Kuzak, Ford’s vice president of Global Product Development, in a statement. "It's not just a technology; it's an experience—one we hope will have people across the globe looking forward to spending time behind the wheel of their vehicle."

MyTouch interface includes two 4.2-inch LCD screens on both sides of the speedometer, and an 8-inch touch-screen LCD that lies on the center console. The system will have SD card slots, USB ports, and built-in WiFi “hotspot” capabilities to enable web surfing, HD radio song-tagging, social networking, and other online-based applications.

The MyTouch interface is built on Microsoft’s voice command technology. So far, the system recognizes up to 20 voice commands, and in the future, drivers will be able to send text messages via voice dictation.

“We had to look very closely at the evolution of hand-held devices in terms of user interface, connectivity, productivity and entertainment applications. Our goal is to set the benchmark for the automotive user interface, just as we’ve done for device connectivity with SYNC,” said Jim Buczkowski, Ford director of Electronics and Electrical Systems Engineering in a statement.

Indeed, a five way switch—like the wheel found on many popular MP3 players and mobile phones—is used to control information displayed on the instrumentation panels. The large center console is touch-screen controlled.

“Sync is easy to sell to a person under 35,” said John Wolkonowicz, an analyst at IHS Global Insight in an interview with BusinessWeek. “Sync is about entertainment and connectivity, which is very Gen Y.”

As the only U.S. automaker to decline a federal bailout last year, Ford has improved its brand recognition and sales figures.

Last month, U.S. sales at Ford climbed 33 percent, far outpacing the sales at its rivals General Motors Co. and Chrysler LLC. Last year, the Ford F-Series line of pickup trucks was declared to be the best-selling pickups for the 33rd year in a row.

Even its sales in China—which became the largest auto market last year—rose 44 percent in 2009.