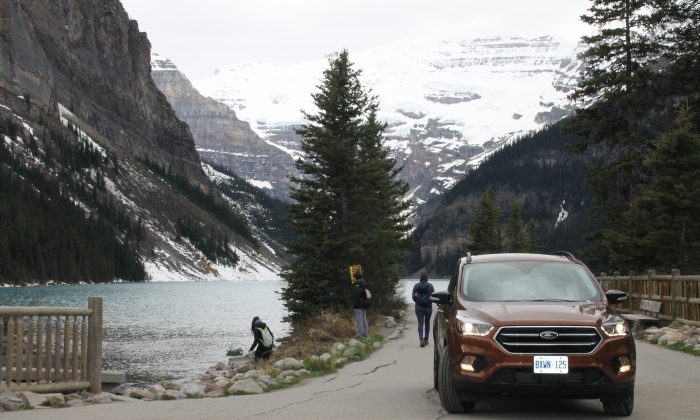 2017 Ford Escape: Driving Through the Rockies

Throughout the year, all the major Canadian-based automotive manufacturers send out invitations to a select group of automotive and lifestyle writers when they wish to present an all-new or majorly-refreshed automobile. Occasionally, these events might be held in exotic, far-off locations requiring extensive travel and then limited seat time in a version of the vehicle represented. Every once in a while, however, an event invite falls into my email inbox that promises something a little out of the ordinary. And this particular instance necessitated extensive time in that vehicle, as we travelled through some magnificent Canadian countryside on an adventure.

One such trip was sponsored by Ford Canada who flew a dozen or so writers into Calgary to attend a technical briefing and then a delightful, challenging drive from Calgary through Lake Louise and ultimately into Jasper. A journey from the foothills up and over beautiful scenic countryside surrounded by the majestic splendour of the Canadian Rockies—skirting the breathtaking Columbia icefields before arriving at the relative tranquility of Jasper.

All this was accomplished in one full day that required an early morning flight from Toronto and then several hours behind the wheel of Ford’s latest iteration of their popular Ford Escape utility vehicle.

Given that we were to be heading home the next afternoon, there would be almost 1,000 km in the front seat of the new Escape as it purposefully took us on our mapped out roundtrip adventure driving some amazing, dare we say, even inspiring routes.

Upon arrival in Calgary, we were whisked through the airport and directed to a meeting room within the Delta Hotel for a technical briefing on the much-improved (we were continually advised) 2017 Ford Escape.

Turns out, the hype was on point. This was quite a different Escape from the previous generation. Changes and additions were abundant. Some obvious, others, well-hidden by teams of engineers and designers tasked to deliver what ended up feeling like an all-new auto to possibly strengthen Ford’s already firm grip on this category of SUV.

Right off the bat, we were advised of a load of new technology built into this, the fourth generation vehicle, including, but not limited to:

According to Greg Watkins, Product Marketing Manager (SUVs) at Ford Motor Company, Canadians continue to love their UVs—sport utility or crossover—and in the CUV market segment some 700,000 were sold in Canada alone in 2015. In this country, the Escape has enjoyed its earned status as the segment leader, moving 47,726 units last year alone. Watkins stated that the volume of crossovers sold last year represents 33 percent of all vehicles sold in Canada—and by 2020, the expectation is that crossovers will account for 40 percent.

Choose an Engine That Suits Your Budget and Requirements

As before, there are three basic levels/finishes for the 2017 Escape—the S, the SE, and the Titanium. It’s with the SE and Titanium we experience the biggest change: the availability of two new EcoBoost engines, a 1.5 L, 4-cylinder with 179 hp and 177 lb-ft of torque or an optional 2.0 L twin-scroll, 4-cylinder turbocharged power plant generating 245 hp and 275 ft-lb of torque on the SE and the 2.0 L iteration being standard on the Titanium trim. The entry level S, the lowest volume seller retains a 2.5 L 4-cylinder engine. Greg Watkins and his team estimate that the SE with the optional turbocharged engine and AWD will likely be their volume seller.

And on that, we would concur. Our drive route from Calgary up to Jasper was spectacular. The smaller EcoBoost engine, while capable, did not feel there was much left when pushed on long, steep climbs with some altitude. The 2.0 L version performed really well. To be clear: most shoppers in this category of vehicle will not be ascending and descending roads through mountains in almost every conceivable weather pattern the elements can throw at you. The smaller EcoBoost option may be more than sufficient driving from Markham along the 401 eastbound daily. At the end of the day, however, it’s about choices: will you be towing consistently; is fuel economy a major concern; and, what will your budget withstand?

From the outside, the overall appearance is a little more rugged, likely with greater appeal to the diverse demographics—millennials and boomers. The front end is now more in keeping with the Ford family appearance and no longer looks “adopted”.

Inside, things have obviously improved, too. General ergonomics are more intuitive and provide the driver and passengers with a feeling of greater cabin space. More thought has been given to softer materials, the position of an electronic hand brake, greater console space and flexibility. Plus, a shift lever positioned where it should have been years ago.

With years of growth and success behind this market leader, Ford has reason to be proud. Based on our driving experience from Calgary to Jasper via Lake Louise and back, it’s safe to say that complacency has not taken root and confidence is deservedly high. With clear skies and a favourable forecast, we were soon on our way from Calgary toward our first stopping point, Lake Louise, driving through truly magnificent country, on well-engineered roads designed to be driven. It appeared that many roads have been carved out of the Rockies themselves with cliffs swooping to the edge of the asphalt.

Throughout the complete drive the marvels of nature passed our slightly tinted windows. Frankly, it seemed that about the only thing missing from this experience was the hushed yet enthusiastic voice-over typical of nature television programs. All through the drive, we encountered many of the indigenous species: black bear grazing metres from the road; what we believed to be a grizzly, bighorn sheep, mountain goats, an elk, and even a caribou or two within Jasper National Park.

After a few hours of seat time, the earlier enthusiasm of the Ford team in Calgary took hold in almost osmosis-like fashion.

The cabin had a feeling of airiness and abundant space assisted no doubt by the crisp, spring weather experienced during our drive. Skies seemed bluer, clouds fluffier and lighter and lakes a fantastic hard-to-describe blue-green. The only shortfall was the seat cushions up front; while driving was quite comfortable and reasonably effortless, slightly longer seat cushions would have been appreciated.

The majority of my seat time was in the top-of-the-line Titanium model. When we made our first stop in Lake Louise at the Fairmont hotel for a coffee and well-deserved leg stretch, we were approached by tourists from around the world, eager to see for themselves this new Ford. In fact, in behind the hotel, we parked (somewhat illegally) but with the “blessing” of hotel security to take photographs. It was here that the Escape was “swarmed”!

Lake Louise boasts the glacier-clad Mount Victoria, which soars an impressive 3,464 meters into the huge, never-ending sky. And, if you are an aficionado of late night television, you might hear the subliminal rejoinder, “But wait: there’s more!” Continue north from the Fairmont and there is the breathtaking scenery along the Icefields Parkway (Highway 93). A sight to behold, the Columbia Icefield is a throwback to prehistoric times. Over the centuries, the slow-moving, powerful flow of ice has carved a path through the mountains, reinventing local geography as it travels, slowly yet inexorably along a path whose final destination has yet to be determined. Here’s a fun-fact to consider: this icefield produces meltwater that eventually feeds streams and rivers which reach three oceans—the Atlantic, Pacific, and Arctic!

It is here that you will appreciate the power of this natural environment: cellular phone coverage is spotty at best and regardless of some of the new communications tech in the 2017 Escape, it cannot compete with Mother Nature.

Driving north, the Escape handles the mountain roads and limited traffic with relative ease. Soon, the Athabasca Falls are in sight. This wonder of the force and power of nature is impressive. Not so much for its size–only some 23 metres in height, but more for the continual, unwavering volume of icy water which cascades downwards with tremendous force.

Bears Are Not Pets: Treat With Respect and Caution

Continuing on our journey we drive into Jasper National Park witnessing further jaw-dropping vistas and a seemingly docile black bear. Do not, however be deceived: these are wild animals and should be considered dangerous and must be treated with caution and respect. This message was continually reinforced by dedicated, uniformed Park Rangers who patrol the roads constantly, keeping a watchful eye open to ensure that wildlife and homo-sapien intruders, respect all boundaries, natural and otherwise. Ultimately we reach our postcard-perfect destination for the evening, the Fairmont Jasper Park Lodge where we parked our well-travelled Escapes together like a herd of sheet metal and plastic.

That evening, en route to a western-themed cookout of epic proportions with much of the local bounty prepared by a legion of chefs, we dined like royalty likely in much the same way Queen Elizabeth II and Prince Phillip did back in 2005. We wondered, however, did they walk respectfully behind a solitary Caribou, ambling the pathways of the sprawling hotel grounds as we made our way to dinner?

The following morning bright and early, we climbed back into our well-equipped vehicles and prepared to descend from mountainous regions toward the foothills around Calgary. For the most part, our route was the same as 24 hours ago, yet it all seemed so different, Such is the magnificence of Canada generally, and this part of our country, specifically.

Here’s the thing: the 2017 Ford Escape will be at home wherever it is driven–without ever feeling out of place or requiring any explanation or apology.

Transportation and accommodation was provided by the manufacturer.