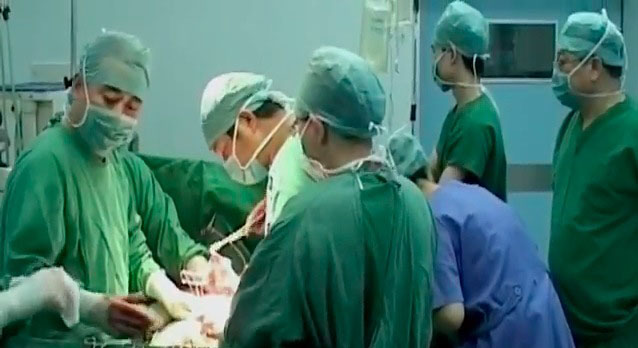 A screenshot from the mini-documentary, "Killed for Organs: China's Secret State Transplant Business." Human rights lawyer David Matas said during a seminar at the University of Toronto on May 28, 2014, that the vast majority of organs available for transplants in China are seized by killing illegally imprisoned Falun Gong practitioners who are targeted by the state. (NTD Television)
Canada

The Chinese regime’s macabre practice of killing prisoners of conscience for their organs and selling them to transplant tourists for “huge money” has not abated—that was the grim message imparted at a University of Toronto seminar on May 28.

Forced organ harvesting in China was the topic of the seminar, and Winnipeg-based human rights lawyer David Matas told his audience that the vast majority of organs are seized by killing illegally imprisoned Falun Gong practitioners who are targeted by the state.

Matas is co-author of two books on the subject, Bloody Harvest: The Killing of Falun Gong for Their Organs and State Organs: Transplant Abuse in China. His work on drawing attention to the issue worldwide since 2006 garnered him a Nobel Peace Prize nomination in 2010.

He said detained Falun Gong practitioners are routinely blood-tested and have their organs examined while other prisoners do not.

“The blood testing and organ examination could not have been for the health of the Falun Gong practitioners since they had been tortured—but it would have been necessary for organ transplants,” he said.

China has a minimal organ donation system, Matas said, yet about 10,000 transplants are carried out per year. Beijing’s official explanation has traditionally been that the organs came from prisoners sentenced to death.

Matas and former MP David Kilgour published their initial report on illicit organ harvesting in China in 2006, and in the following years the regime made noises about shifting organ transplantation from death-row prisoners to donors.

In April this year, however, health authorities publicly abandoned the commitment to end the sourcing of organs from prisoners, a development that doesn’t bode well for prisoners of conscience, Matas said.

Waiting times for transplants of organs in China are days and weeks, Matas noted, while everywhere else in they are months and years.

“A short waiting time for a deceased donor transplant means that someone is being killed for that transplant,” Matas said.

He said there is a “heavy militarization of transplantation” in China, and hospitals with a ready supply of available organs are often military hospitals.

“In China, the military is a conglomerate business and the sale of organs is a prime source of funds.”

Falun Gong, also called Falun Dafa, is an ancient Chinese spiritual discipline that had between 70 and 100 million adherents when the Chinese regime launched a crackdown on it in 1999. The resulting campaign of persecution, which continues today, has seen tens of thousands of practitioners imprisoned and tortured, and countless families torn apart.

Nearly 4,000 practitioners have been confirmed dead as a result of the persecution, with up to 65,000 killed for their organs, according to estimates by Ethan Gutmann, a U.S. author who has been writing about Falun Gong since 2002.