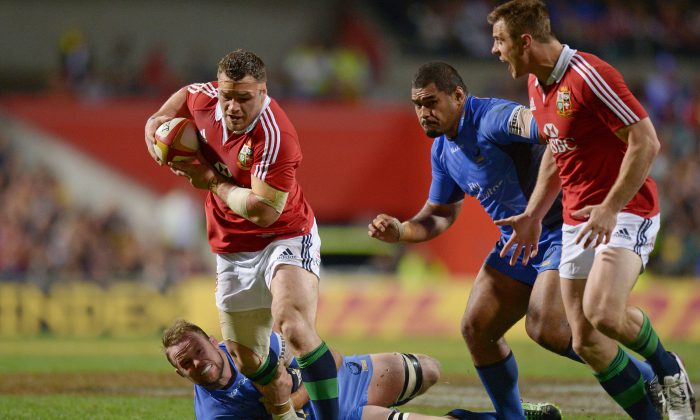 Cian Healy from the British and Irish Lions rugby team breaks clear against the Western Force during their tour match in Perth on June 5. (GREG WOOD/AFP/Getty Images)
International

Force a Laughing Stock, Lions Put Them to the Sword, as Healy Goes Down injured

The British and Irish Lions put a “second string” Western Force to the sword last night in the first match of the Australian Tour.

With all the bluster and talk of whether the Lions should tour Australia again in the future, the big story for the Lions is the potential loss of Cian Healy to a tour-ending ankle injury.

Healy, who had been accused earlier in the match of a serious offense biting a Force player, fell clutching his ankle in the 36th minute. The Irishman was subsequently stretchered off. While the Force’s scrum-half Brett Sheehan’s biting accusation was inconclusive according to the reviewing match official, Healy awaits X-rays to determine the severity of his injury.

Aside from Healy, the game was, for the most part, unremarkable. More interest surrounds the weakness of the Force’s selection and what it means for the future of Lions tours.

The 17–69 belting Wednesday (June 5) is unsurprising given that the Perth club had included seven new players who had not yet played in a single Super Rugby match.

Force coach Michael Foley appears to have put this Sunday’s (June 9) Super15 match against the Waratahs ahead of the once in a life-time opportunity to challenge the touring team.

Many criticized the selection of a “second string” side for the first Australian warm-up in the Lions Tour ahead of the three Test series (international games); none more than English rugby commentator Sir Clive Woodward.

In the lead up to the match, Woodward, the former English player and coach who led England to victory in the 2003 Rugby World Cup, accused the Australians of “treating the Lions with contempt” in his Daily Mail column.

Generally, Woodward divides opinions, but on this issue most appear to be in agreement with his assessment that calls on the “arrogant Aussies” to “show us respect.”

“It is unacceptable and disgraceful to cobble together a weakened, second-string club team to play against some of the best players in the world on one of the great rugby tours,” wrote Woodward, who coached the Lions in their tour to New Zealand in 2005.

Instead of pointing at Foley, Woodward turned his attention on Wallaby coach Robbie Deans suggesting that fielding a weakened Force side was a ploy to take the Lions by surprise in the first Test.

“The moment you do not allow your potential test players to appear in the provincial games then your motive is clear: give the Lions an easy run-in and then hope to ambush them in the first Test,” he wrote.

Prior to the match, Lions coach Warren Gatland told Sky Sports that they had hoped to play a stronger Western Force lineup.

“You want to play the strongest sides you can. It’s disappointing they are not at full strength. But the Lions just want to go out there and put the jersey on. They are hungry.”

The Lions are finding their feet. Their 45-man squad is split to accommodate a busy tour schedule. However, they were in command from the first whistle to the final one. The Lions had a nine-try victory and Leigh Halfpenny had an impressive 100 percent kicking efficiency.

Realistically, the Force, Super Rugby’s 13th ranked team out of 15, was never going to defeat a combined England, Ireland, Scotland, and Wales team. It would have been a miracle if they had despite all the pre-match bluster.

Unquestionably, the Force should have given the Lions a harder fought, bruising encounter that left them tender ahead of their coming matches. The Force’s “B players” did do their best, giving their all. A wining result was beyond them though; the problem lies with the team’s selection.

However the under-strength side did show some spirit to score two late trys. But it was too little too late, as the result reinforces the pre-match opinion that the Force and Foley are an embarrassing laughing stock.

The Lions tour Australia once every 12 years. Pre-match, Woodward posed the question: “After this disgrace, should we come back?”

This now needs to be answered by the various Australian teams doing everything they reasonably can, in the remaining eight matches, to leave no doubt that the answer to the question is a resounding: “Yes, they should come back.”

How they do this is going to be complicated with the Wallaby’s growing list of ruled-out injured players including openside flankers David Pocock and George Smith, lock Sitaleki Timani, hooker Tatafu Polota-Nau, and loose forward Scott Higginbotham.

Meanwhile, Wycliff Palu, Dave Dennis, Nick Cummins and James Slipper are in rehab hoping to be ready for the Tests.

For more information on the Australian Tour.