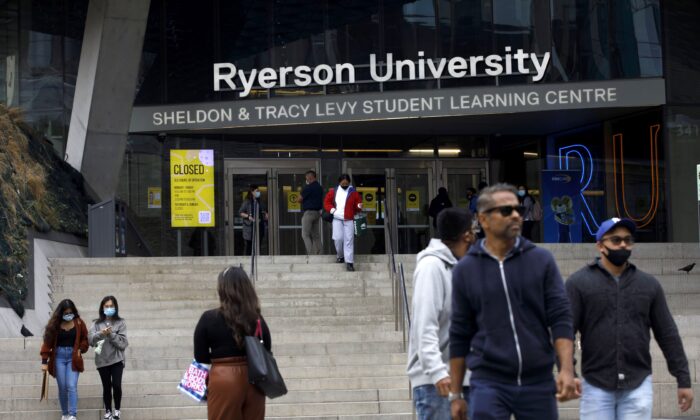 The front steps at Ryerson University campus in Toronto on Sept. 8, 2020. Ryerson is among the universities that have decided to effectively end their COVID requirements for attendance come May 1. (The Canadian Press/Cole Burston)
Viewpoints

For Young Adults, the Fallout From COVID Restrictions Has Been Significant

In a move consistent with Ontario’s trajectory, the University of Toronto and Ryerson University have decided to effectively end their COVID policies of mandatory masking and vaccination as a requirement for attendance come May 1. The University of Ottawa and Carleton University are following suit.

In the University of Toronto’s case, the decision comes a month after it was hit with a human rights complaint targeting its vaccine mandate filed on behalf of students and faculty impacted by it. The basis of the complaint was that the policies were no longer in line with the evolving science, and the university should follow the decision of the province and the chief medical officer of health to end vaccine mandates.

“The University of Toronto is going against public health recommendations even though they relied on them to enforce overly restrictive mandates on students, staff and faculty,” says a press release regarding the complaint.

“Why is the University stubbornly resisting the evolving science when they relied on it to legally justify their overreaching vaccination requirements? The University’s approach violates the human rights of members of the University of Toronto community and must be immediately removed.”

This statement brings to mind the rather perturbing cases of some students, particularly Harry Wade, an engineering student at Western University in London, Ont., who was arrested and escorted off campus and subsequently expelled for not complying with the school’s vaccination and masking requirements. As a result of his experience, Wade said he likely will never “trust another academic institution to protect my rights until someone acknowledges the wrongdoing that has been done.”

At the time, such an event was very crassly dismissed by public health officials and COVID obsessives as only someone getting the punishment they deserve for not following the rules. But all of this is also emblematic of how the pandemic and the response to it has done much to derail some students’ university experience and make it memorable for the wrong reasons, such as isolation and increased anxiety over one’s prospects.

Damage has been done with these policies, as the evidence continues to make clear that, especially in the case of vaccines, these overly stringent mandates have done little to achieve their intended result (reduce or essentially eradicate COVID spread) but have done much to affect the livelihoods of younger Canadians in negative ways. This is in addition to giving administrators license to decide who can and cannot attain an education based on their personal medical decisions.

For two years, university students were forced to put their lives on hold during a time in life when people in their age group make the decisions that begin to lay the foundation for their career and family formation. According to studies done by GrantMe on COVID’s impact on higher education, the pandemic-induced shift to remote learning caused many students to lose focus and confidence in their abilities, which impelled them to decide to attend lower-ranked universities, possibly affecting their early career prospects. Seventy-seven percent of students said they were less confident that they would be able to afford to pay for their education, which greatly influenced their choices, with another 41 percent saying they’d limit their options to local campuses in order to prevent further strain on family finances. Others decided to postpone or quit pursuing post-secondary education altogether.

Corresponding with this is the dismal employment situation many young people were faced with as a result of the pandemic. As a study published in November 2021 by the Environics Institute found, young adults under the age of 30 were more likely to have their hours decrease or lose employment, as well as see a decline in their earnings. And when it came to recent graduates, for those between the ages of 18 and 24, “the pandemic’s negative impact on employment was felt more, not less, acutely as educational attainment rose.”

The impact of our pandemic response will be endured most by this age group in the long-term. What makes it even more maddening is that public health experts will, for the foreseeable future, continue to insist that any confirmed cases augur a “sixth wave” that requires the same cycle of restrictions and lockdowns.

However, we should no longer humour the fearmongering by neurotics whose abysmal track record speaks for itself at this point. It is time to move on, not least for those who put their goals on pause during the prime of their lives or felt forced to give up their goals completely.