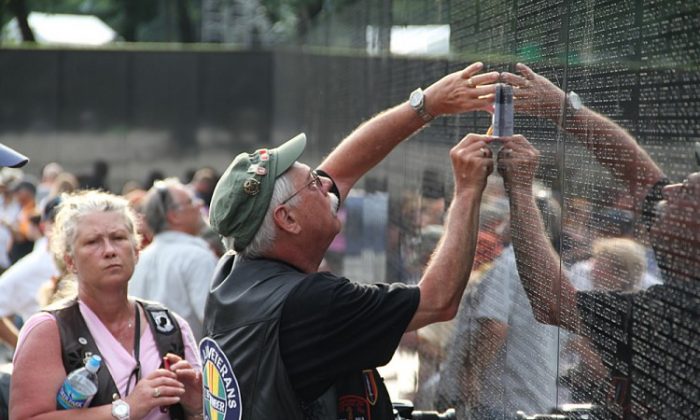 The Vietnam Veterans Memorial (VVM) in Washington, D.C. is a moving experience at any time—but on Veterans Day and Memorial Day weekends, it is a complexity of emotions. At once heartbreaking and consoling, tragic and yet healing, it is both sacred and profound.

Thousands of Vietnam veterans, mothers and fathers, families and friends, descend upon the memorial on those days. They come to touch the sheer granite wall that is inscribed with the names of every serviceman who died, or was declared missing in action, as a result of the Vietnam War.

They track their loved ones from the four books encased at the entrance, moving down the wall, peering and stopping to gently trace their fingers over an etched name: Many weep; some lay memorabilia that is picked up at the end of the day and archived for eventual display; others go quietly down memory lane, visiting a past that for most has been too painful to revisit.

“You can spend some time with the brothers and introduce them to some people,” Vietnam veteran Mark Del Maestro told The Epoch Times at the memorial site. He tells the people, “This is the guy that I lost in Vietnam, I’d like to introduce him, he was 20.”

New Jersey-born Del Maestro served on the riverboats out of Da Nang and lived through the Tet Offensive. He lost five high school friends and three from the riverboats.

“Their names are on the wall. I can go and see their names,” he said, adding that for Vietnam veterans, “We can put a face to a name.”

Del Maestro spoke openly about the Vietnam War and the memorial, now known simply as “the wall,” but it wasn’t always this way. For years Vietnam veterans were barely able to acknowledge they had fought in the war, let alone speak of their experience. When America’s servicemen returned from their duty in Vietnam, they were not met with the welcome that U.S. servicemen receive now. There were no welcome announcements at U.S. airports, nor any special recognition.

“We were literally and figuratively spat on when we came home,” said Tom Forbes, who was in the 1st Air Cavalry Division during the Vietnam War and who now serves as a docent at the VVM wall.

Returned servicemen paid the price for one of the most controversial wars in U.S. history. Protesters took to the streets and confrontations took place not only with police, but in neighborhoods and families, as well.

“The protesters were taught to spit on a soldier, when it was really Congress that was making the calls. We were just doing our job, and they took it out on a soldier,” said Del Maestro.

Controversy and The Wall

It was seven years after the Fall of Saigon and the end of the Vietnam War that the VVM wall was built. Its construction was also surrounded by controversy.

A competition had been set up to choose a design. There were four criteria: To be “reflective and contemplative in character; harmonize with its surroundings; contain the names of those who had died in the conflict or who were still missing; make no political statement about the war.”

The choice was not unanimous, however. Some wanted a statue, as tradition would have it; others felt a wall was demeaning, because it fell below ground level. Others did not like the black granite—it represented shame, some said. And one vet, who was too emotional to give his name, said it did not appeal because of the country of origin of the designer: “Asian,” he said.

Eventually, under the threat that the memorial would not go ahead, a compromise was reached—the VVM would include a statue and the American flag.

Today, the larger-than-life bronze statue of ‘Three Servicemen’ by Washington sculptor Frederick Hart, and a 12-foot by 18-foot American flag on a 60-foot pole, stand at the Lincoln Memorial entrance to the VVM wall. Young Maya Lin’s dream is also fulfilled.

Her vision was “to create a park within a park—a quiet, protected place unto itself, yet harmonious with the overall plan of Constitution Gardens,” according to the VVM website.

Amazingly, Ms. Lin received a B grade from Yale for the original design—Charlie, one of the veterans who works as a docent at the memorial, told The Epoch Times.

The black granite wall has a mirror-like surface that not only reflects the surrounding trees and monuments but, more specifically, reflects the viewer as he or she searches for that special name.

“The memorial has given dignity back to the families of the fallen because of the way they were treated then,” said Charlie, “And lets them know their loved ones will never be forgotten.”

Charlie did not want to give his last name. “It is not about me,” he said, but confessed that “the wall” had made a huge impact on him. When it was to be dedicated, Charlie had not wanted to go. “I had had enough arguments during the war,” he said. However, with his wife’s encouragement, he came to D.C. for the dedication in November 1982.

There were 250 thousand veterans in D.C. that day. Charlie had never seen so many servicemen together.

“The mantra was ‘welcome home'” he said, recalling the parade down Constitution Avenue that day. “We came around a corner and there was a World War I veteran standing there with his helmet on holding a sign saying ‘Thank You, Vets.’ There wasn’t a dry eye after that. It was just so powerful. You talked to people you didn’t know, told stories, and realized you were not alone.”

Charlie is a regular volunteer at the Vietnam Veterans Memorial wall now and is looking forward to Memorial Day this year, which not only celebrates the 30th anniversary of the wall, but also the 50th anniversary of the Vietnam War. He is also looking forward to Veterans Day in November when all 58,272 names inscribed on the wall will be read out.

He hopes more Vietnam veterans will come to see the memorial. Despite the thousands in D.C. this week, there are many that still cannot face the memories. But Charlie encourages those veterans and others who have not even made it thus far. The experience changed his life, gave meaning to it, he said.

“It is important for veterans to come here,” he said, “They will feel the support and realize they are not alone.”