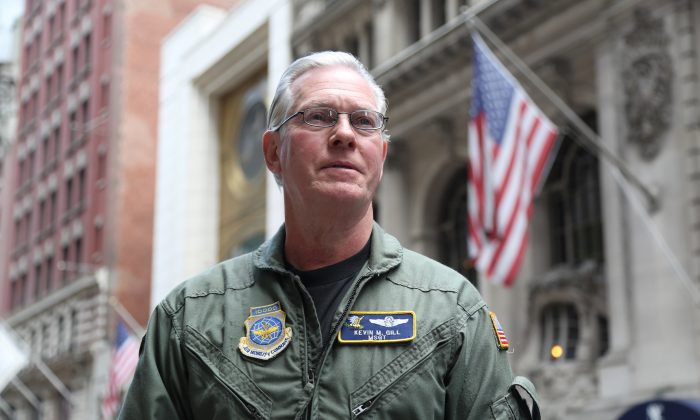 NEW YORK—Coming home from the Vietnam War, at the age of 21, Master Sgt. Kevin Gill experienced the kind of trauma no war could inflict. There was no welcome, no gratitude.

After a year of service in Vietnam, Gill returned home in December 1971 and saw that time stood still for everyone else back on Staten Island.

At that time, Americans were going through domestic turmoil. The anti-war, civil rights, and feminist movements polarized the nation. When the Marines, Air Force, and Army troops returned home from Vietnam, they were told to leave their uniforms at the airport to avoid civilian ridicule.

And they did. For many veterans, rejection at home sparked anger. Some veterans fell into alcoholism and drug abuse; some committed suicide. Others, like Gill, picked up their bags and went back to war.

“I had a dramatic change in my life, that’s why I kept everything in,” Gill said.

It wasn’t until 20 years later that Gill heard the words he longed for in 1971. A veteran at the Desert Storm parade in Manhattan in 1991 told him, “Welcome home.” Another friend told him, “Thank you for your service” when they were having a casual conversation at a bar. The mention of gratitude stumped him.

The phrase “welcome home” was coined as a greeting for Vietnam veterans. Even today, those aware of their history greet them with “welcome home.”

“This is the best way we know to take [care] of each other, since no one else would back then,” said retired Marine Corps Gunnery Sgt. Thomas Lakin, who was called a “baby-killer” and nearly spat on when he returned from Vietnam.

Opening Up to Move On

Gill served in the Air Force for 35 years. He was in the Gulf War, the invasion of Grenada, Panama, Beirut, the embassy bombings, Rwanda, and has flown other secret missions.

On Nov. 8 he sat at the library of the General Society of Mechanics & Tradesmen building in Manhattan and shared some of his experiences and the scars of trauma from the war.

Gill is a dignified, timid, and playful Vietnam War veteran. He decided to share his story because he was told that opening up could do him good. He recently joined therapy programs run by the Department of Veterans Affairs. His eyes welled with tears as he spoke quietly, often hesitating.

“Most of my life I wouldn’t admit that, but now I do have to, because good things come out of it,” Gill said. “It’s a great program. It’s saving lives. It’s helping people cope with it and continue their lives.”

When Gill returned home in his uniform, people knew where he was coming from. Though he was confronted with denigrating looks from anti-war protesters, he always tried to be understanding.

Gill volunteered for Vietnam, but decided to keep quiet about his service.

“We wouldn’t say we were a veteran. It’s not just me but all of us just kept it quiet, because there was an attitude against us,” he said.

The problem with a negative reception back at home, was re-traumatization, according to Carolyn Alroy, a psychologist who dealt with 9/11 victims and has done research on the impacts of trauma. Alroy said that the negative reception after the trauma experienced during the war had tremendous consequences for veterans.

“With trauma, the prognosis is always better when there are no prior incidents. The more trauma that you’re exposed to, the more difficult it is to bounce back,” she said.

Times have changed, however, and especially so after the 9/11 attacks, which Gill said has to do with people’s realization of the importance of defense by those in the Army, the Navy, and the Air Force.

“The air is full of enthusiasm for veterans now,” he said.

Gill said that trying to understand veterans is an important step in helping them cope.

Bill Rajewski Sr. who served in Vietnam in 1966 as part of Marine Corps said that people expressing gratitude for his service and welcoming him home means a lot. Rajewski still remembers the people who offered him a better seat on an airplane.

“All of these things and others trip emotions in me that I have probably suppressed for forty years or more,” Rajewski wrote in an email, adding that he gets emotional when hearing “Welcome Home” and “Thank you.”

Founder and instructor of the Veterans Writing Workshop at New York’s Fordham University, David Surface, said that when the program opened three years ago, most of his students were Vietnam War veterans.

“These guys really are wrestling with what their stories mean. What was it worth?” he said.

Most of the veterans who Surface dealt with just wanted to forget the past. They also wanted to meld into the scene of the American working class. For people like Gill, going back to the Air Force was the only way to deal with the war.

“This was important for me, it probably saved my life. I was surrounded by people that understood.”