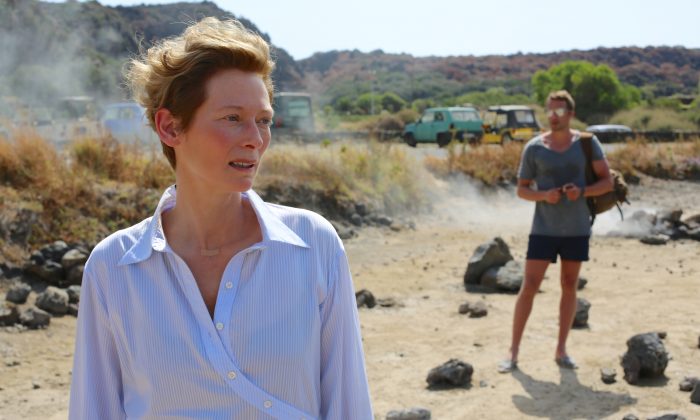 This image released by Fox Searchlight shows Tilda Swinton (L) and Matthias Schoenaerts in a scene from "A Bigger Splash," in theaters on May 4. (Jack English/Fox Searchlight via AP)
Entertainment

NEW YORK—In a sleek, luxurious Manhattan hotel room, Tilda Swinton stands and announces that she’s bound to break something. “If not you then me,” she says cheerfully.

That the stark interior would, in even a brief stay, be in jeopardy from Swinton shouldn’t be surprising. Few confines have ever been able to hold the shape-shifting, convention-bursting actress.

But to say she’s a chameleon doesn’t quite do justice to Swinton’s myriad transformations: flickers of flesh that bend with the light or mood, alternatively illuminating her and retreating behind masks. She plays people perpetually in flux. Even “Tilda Swinton” is illusory.

“I simply do not buy that identity isn’t fluid,” she says. “I’m not sure that identity exists. For a long time, I noticed that the stories I was drawn to making were the stories of people who were caught in a concept of ‘OK, that’s me’ and they came up against a wall and had to transform.”

In Luca Guadagnino’s “A Bigger Splash,” Swinton plays Marianne Lane, a rock star on the other side of a metamorphosis being pulled back to her prior self. She’s resting her voice after surgery on her vocal chords on an idyllic getaway on the Sicilian island of Pantelleria with her brooding beau (Matthias Schoenaerts).

But her jaunty, hard-living producer and former flame Harry (Ralph Fiennes) turns up, along with his newly discovered daughter (Dakota Johnson). Like a film noir villain, Harry brings with him all her rollicking past, and the foursome settle in for a tense holiday. (The film is a riff on 1969’s “La Piscine.”)

(Following the recent interview, Swinton would become entangled in a controversy over her casting as the Ancient One in Marvel’s “Doctor Strange.” The character has traditionally been Tibetan but in the upcoming film will be Celtic.)

“A Bigger Splash” is Swinton’s fourth film with Guadagnino, the Italian director of “I Am Love,” a lush feast of a movie. Together, they’ve pursued what Swinton calls “sensational cinema” where you can almost taste the food or feel the sun on your skin.

For Swinton, breaking the mold of identity isn’t just a way to perform, but a way of life.

It was Swinton’s idea to make Marianne (a David Bowie–Chrissie Hynde hybrid on the stage) nearly mute, speaking only occasionally in a raspy voice. Mourning the loss of her mother at the time, Swinton was attracted to the silence. It would also submerge much of the film’s dramatics below the surface, she reasoned.

“I like to be quiet and I also like listening,” says Swinton. “I was able to kind of download what she was up to, which is basically listening to everybody else. And that’s my preferred position in general.”

The 55-year-old actress grants it’s an ironic thing to say on a day where she is, with great eloquence, discussing herself and her work. It’s a career that she considers accidental and, happily, a mystery.

The daughter of a highly decorated military family in Scotland, Swinton initially studied literature at Cambridge and still considers herself foremost a writer. Her induction into cinema came largely from the experimental filmmaker Derek Jarman, who died in 1994.

Sally Potter’s “Orlando,” in which Swinton played the long-living poet who changes sexes in midlife, was a fittingly androgynous, gender-defying breakout. As a mother, she drew raves for “The Deep End” and “The War Zone.” An Oscar for her icy corporate lawyer in 2007’s “Michael Clayton” followed.

It’s the résumé of a world-class actress, and yet she doesn’t identify as one.

“I’m never really that interested in acting, to be honest with you,” says Swinton. “I can quite understand it must sound crazy, given that I’ve been doing this for 30 years. What I need is this feeling of not knowing what I’m doing. Genuinely this feeling of beginner’s mind, constantly.”

Her malleability is enabled by an open-mindedness that doesn’t even accept that this is what she does. She acknowledges thinking this way may be a conceit or a lucky charm. “But anyway it’s working,” she says. “It’s keeping me interested.”

“I’m just sort of unfolding things. Just constantly unfolding things with no pressure,” says Swinton. “I’m not exactly professional. In a way I have no plans. And I like that. I’m a kind of wanderer.”

Instead, she sees her acting as a series of friendships with collaborators: “the foundation stones of my house,” she calls them. They include Guadagnino, Jim Jarmusch (a book-obsessed vampire in “Only Lovers Left Alive”), Bong Joon-Ho (a dictator’s ruthless spokeswoman in “Snowpiercer”), Wes Anderson (unrecognizable as an elderly aristocrat in “The Grand Budapest Hotel”).

The directors, too, are collectively infatuated. Jarmusch has called her “one of the most amazing creatures I have ever met.” Anderson: “I was immediately captivated.” Guadagnino: “I am home with her.”

For Swinton, breaking the mold of identity isn’t just a way to perform, but a way of life.

“Life is just a series of choices, and the gamut’s pretty wide,” says Swinton. “People can make all the choices they can see in 360 vision. Constantly these opportunities are there for us. We just have to know to take advantage of it. That’s what I feel about identity. That’s the thing that keeps me falling into the habit of performing.”