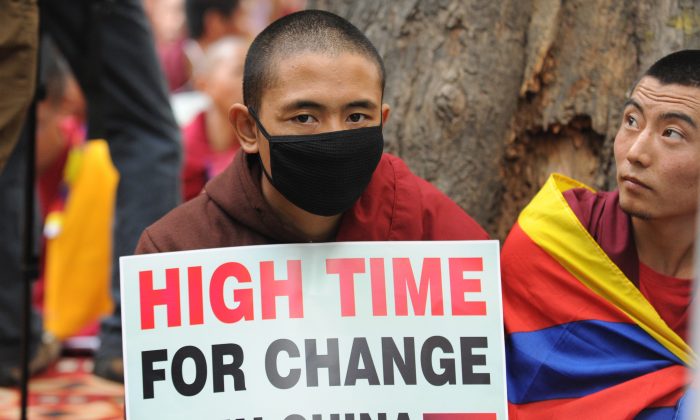 Tibetans monks hold placards during a protest rally in New Delhi on January 31, 2013. The Chinese regime has deployed a new surveillance system, which will make it more difficult for Tibetans to escape to Nepal. (Raveendran/AFP/Getty Images)
China

A new frontier monitoring system was detailed by the Chinese Communist Party’s (CCP) state-run China Daily news outlet on Nov. 6. It uses advanced radars and unmanned aircraft to track people, and has already been deployed by border defense units in Xinjiang, Yunnan, and Tibet.

While the system is being touted as a way to stop drug trafficking and illegal border crossings, it will likely be used to track and arrest persecuted minority groups—particularly Muslim Uyghurs in Xinjiang, and Tibetans as they try to escape the Chinese regime.

According to Alistair Currie, spokesman for the activist group Free Tibet, the new surveillance system adds yet another layer of risk to Tibetans hoping to escape the Chinese regime’s rule, which often means taking the dangerous hike to Nepal.

“It is already extremely difficult for Tibetans to escape from Tibet, especially via overland routes,” Currie said, in an email interview.

Chinese soldiers along the borders have been known to shoot and kill Tibetan refugees—including women and children—as they try to flee China.

These killings were caught on film in 2008, and showed Chinese soldiers shooting Tibetans near the Nangpa La Pass, as they were trying to reach Nepal.

With the new system, according to China Daily, “people trying to cross the border will be detected,” and it then “automatically notifies soldiers.”

Over the years, according to Currie, this journey has only become more difficult for Tibetans. He said they’ve “seen a huge decline in numbers of refugees,” which went from thousands per year, to hundreds, and to possibly just dozens now.

He said Tibetans can be creative in finding escape routes out of China, but with the new system, it “certainly looks like it will make it more difficult for them to do so in future.”

Currie said it’s difficult to say how the system is being perceived by Tibetans since “it is extremely hard to get information out of Tibet because of the level of surveillance and risk.”

The system was designed by the Southwestern Institute of Technology and Physics, which is a subsidiary of China North Industries Group Corp—one of the CCP’s main weapons manufacturers.

According to China Daily, the surveillance system is able to watch the borders around the clock, and functions in all weather. It uses electro-optical devices, radars, communications equipment, command-and-control instruments, and tools for image analysis.

A representative from Southwestern Institute of Technology and Physics, Mao Weichen, told China Daily that the CCP currently has border monitoring systems in place—particularly in Xinjiang, Guangdong, and Heilongjiang, but these mainly rely on just video surveillance.

The new system, Mao said, “has a wider coverage and more deterrence thanks to the use of drones and acoustic weapons.”

Acoustic weapons use sound to injure, incapacitate, or kill people. Weapons of these types are typically used for crowd dispersal with more powerful ones causing pain and disorientation, while lighter ones are known to cause nausea or discomfort.

Currie said the concern over the new surveillance system goes beyond Tibetans trying to cross the borders, however.

“Having a ‘spy-in-the-sky’ in border areas also increases the opportunities for the state to monitor Tibetan activity in those areas unrelated to the border itself,” he said.

The CCP often has a tough time monitoring people in remote areas like Tibet, he said, noting the new systems seems “like a new mechanism for state control.”

While news of human rights abuse in Tibet has become quieter, the CCP’s suppression of Tibetans and other groups in China hasn’t slowed down.

The slowing of information can be partly attributed to the Chinese regime becoming more efficient at suppression.

“We are certainly aware of instances of torture several years ago and there’s little reason to believe that will have changed,” Currie said, noting Free Tibet recently received a document from 2014 that details rewards for Chinese border guards in Purang County, which borders Nepal.

Rewards range from 500 to 50,000 yuan, and the document states if “any person” arrests the person in question, and brings them to the Public Security Bureau, the person “will be rewarded two and a half times more than the prescribed reward.”

“For information collected by two or more farmers and nomads, an average reward will be given according to the number of people,” it states.

The new system will take what is already an extremely authoritarian program to a new level.

“Clearly, a system based on technology offers substantial advantages over the use of community members who will usually be extremely resistant to providing such assistance to the regime,” Currie said.

He noted that the CCP’s state mouthpieces tend to exaggerate in their reports, but the system will build on other systems currently in place—which have already made escape very difficult for Tibetans.

“China’s national security infrastructure in the west—including roads, rail, and airports, which are proliferating in Tibet—is equally useful for enabling the deployment of forces for repression in Tibet wherever its needed,” Currie said.

He added, “this project is entirely consistent with that pattern.”