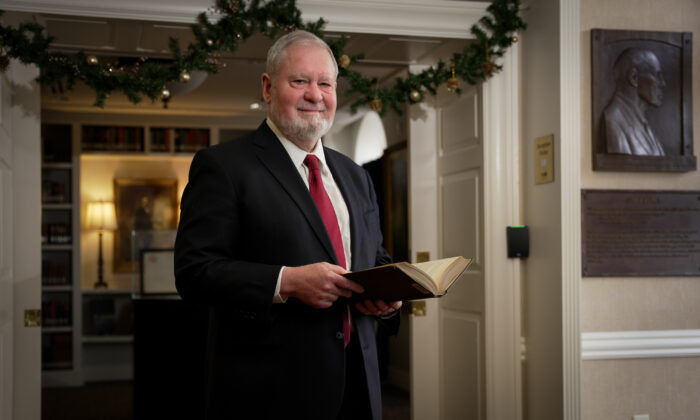 For the Love of Learning: An Educator’s Passion for Truth and Joy

Hillsdale president Larry Arnn on science, big government, and the nature of learning
By Jan Jekielek

“The trouble with tyranny,” says Larry Arnn, “is it takes the best in us, and interferes with it. Whereas better to let our best flourish, and then we can be happy.”

In a recent episode of “American Thought Leaders,” host Jan Jekielek spoke with Larry Arnn, president of Hillsdale College and a professor of history and politics. They discussed such topics as the past, the meaning of education, the role of experts in government, and tyranny.

Jan Jekielek: You’ve launched this new initiative, the Academy for Science and Freedom. All of the members are also American Thought Leaders like you’ve become here. Give me a sense of why this is important. What’s going on?

Larry Arnn: I have a particular responsibility. I’m supposed to operate a college, and for the first time in our 177 years, there were disruptions to that goal.

I thought, I should figure out if we can have college. Would it be safe for the students?

We thought urgently about this—night and day during spring break.

And I found out about these three guys [Dr. Scott Atlas, Dr. Jay Bhattacharya, and Dr. Marin Kulldorff], and I discovered their writing and that they’re very serious academics. They’re like the best teachers you’ve ever had. They’re also restrained and good at not saying more than they know.

They helped us on a weekly basis for months and wouldn’t let me pay them anything. We had college, and we were threatened a fair amount by the government. But we had lawyers and thought we could defend ourselves, and we had a case that they helped us assemble.

Anyway, these guys were very helpful to me, and I developed a deep respect for them and friendship with them. They called me three or four months ago and they had this idea. I said, “So you want to start an institution?” They said, “Yes,” and I said, “I know how to do that, and I’ll help you.” They said, “We want to do it with you.”

These guys are all faculty members. They’re pretty shrewd. So yes, we’re going to do this thing.

Science is a way of knowing. It proceeds at its own rate, takes time to find out. On the other hand, decisions are an exercise of power that has to be done all the time. It’s just foolish to say that scientists can rule.

I study Winston Churchill a lot. In 1901, when Churchill was 27, he wrote to H.G. Wells. Churchill loved the novels Wells wrote about the future. But he said: “I can’t agree that a future society can be governed by experts. Because expert knowledge is necessarily limited knowledge.”

Anthony Fauci may know a lot about infectious diseases. But he doesn’t know about subjects that are relevant to these lockdowns, like teen suicide, unemployment, bankruptcy, and third-world starvation.

Churchill asks, “How do you make those decisions?” You consult the experts. You consult those from whom you get your authority, which in the case of a democratic country is the people. And you make practical judgments from day to day, because the facts are changing all the time.

Mr. Jekielek: How is it that we suddenly have accepted this idea of rule by experts?

Mr. Arnn: Churchill said that science has taken over the world. We’ve been conscripted into its ranks, put to work according to its principles, and educated by it. No generation has ever been handled like this before.

We’ve delivered ourselves into the hands of people who have distorted their own art or discipline.

In totalitarian regimes—the big one is China now—they’re just like ancient tyrannies, except they have the tools of science, which are very powerful tools.

In Book Five of “Politics,” Aristotle explains how these tyrants sustain themselves. No one is to have high thoughts or privacy. People are not to have trust and friendship among one another. Nothing is higher than the rule and the ruler.

That’s why you have to spread the power around. The reason I like these three scientists, the reason I like your newspaper, is you don’t think you can tell everybody in the world what to do.

Mr. Jekielek: It seems so simple, doesn’t it?

Mr. Arnn: It is simple. In the education system today, we’re not to read anything outside this time, and that means we wipe out human history. That was all slavery and oppression.

In Book One of Aristotle’s “Politics,” he condemns slavery. Isn’t that interesting? He condemns it on just the ground that you condemn it, the same ground Abraham Lincoln condemned it. It’s taking from somebody something that is naturally theirs.

Thomas Jefferson also condemned slavery. He’s the single most important reason there was no slavery in the Old Northwest Territory where I happen to live—Michigan, Ohio, Indiana, Illinois.

What was his argument? “Men are not born with saddles on their backs nor others booted and spurred to ride them.” Men are not horses, and they shouldn’t be governed the same way that horses are governed.

In Orwell’s “1984,” Winston Smith’s job is to rewrite every encyclopedia article, every news account, every book—to make them say what the Party says. He’s changing history. And that’s the destruction of reality.

Mr. Jekielek: How did we end up assuming that experts get to rule?

Mr. Arnn: There’s something powerfully attractive about that idea. It’s not some plot that nobody believed in.

Imagine the American government in 1900. It consumes 6 to 8 percent of the gross domestic product. That money is distributed in a pyramid and the big bit at the bottom is in counties and towns. Then the second thinner bit is in the states, and the federal government is a little bit at the top.

Now the government is 52 percent of the gross domestic product, and there’s a system of centralized control up and down the line. It turns the whole thing upside down and makes it much bigger.

In the Progressive Era in the 19th century, these ideas came into America from Germany. People like Woodrow Wilson, John Dewey, and Frank Goodnow started gathering power into a permanent class of experts now known as the administrative state, and that has become a force of its own.

They believed that if you took a group of trained people and gave them a guaranteed position and a salary, then they wouldn’t have any personal interest than to serve.

Come to find out, those people are still human. The old laws of human nature can’t be repealed. We don’t get to create heaven here on earth.

Mr. Jekielek: There’s also this ideology that reality is whatever we say or believe it is. Hence our acceptance of a whole lot of rules and dictates over the past couple of years.

Mr. Arnn: Force can do a lot. What tyranny can’t do is make people happy. China is richer than it’s ever been today. Are the people happy there? I know some people in Hong Kong and Taiwan who are very unhappy—Hong Kong because they’ve been taken over; Taiwan because they fear communist China.

And in mainland China, people surely don’t like to be scored and rated and their compliance constantly measured. And that’s possible now in America, too.

The trouble with tyranny is it takes the best in us and interferes with it. Whereas better to let our best flourish, and then we can be happy.

Mr. Jekielek: What motivated the interest in K–12 education for Hillsdale?

Mr. Arnn: The first line of Aristotle’s “Metaphysics” is, “The human being stretches himself out to know.”

We want to know and we can know. Everybody at some point falls in love with learning. Something strikes you and all of a sudden, you’re in a different place.

There’s a great kindergarten teacher in Leander, Texas. She’s in one of the charter schools we sponsor. I’ve turned her into a tourist attraction.

If you go in there on a given day, there’ll probably be three or four adults sitting there. They want to see the show. And those little wigglers, they want to learn from her. They learn amazing things right away.

That classroom is joyful. We forget that learning is a fulfillment and exercise of our nature and not an engineering project. I like to say, we’ve got to stop thinking that education is making something.

Instead, you’re helping something grow, and things that grow have the principle and energy of growth inside themselves.

At Hillsdale, my favorite sport is eating in the dining hall with the students. They’re all in there, and I’m the old guy who sits and talks with them. And they put cartoons in the paper about it. If they don’t have class, they’ll sometimes sit there talking for three hours, and so will I.