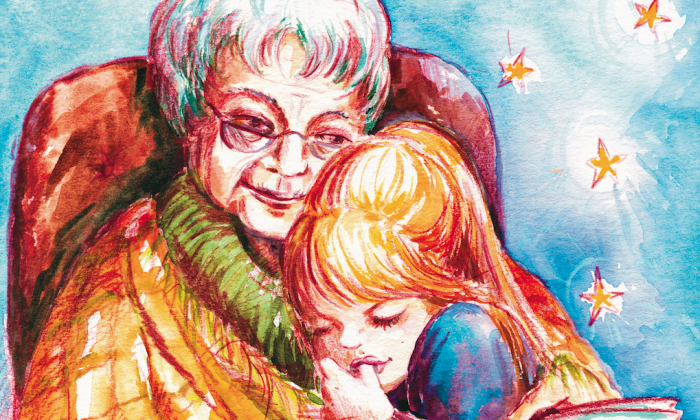 For the Love of Grandma

It was one of those mornings: My eldest wouldn’t get dressed for school, and I had to plead with my toddler to eat something, anything, on his breakfast plate.

Most weekday mornings feel like controlled chaos as I attempt to get myself to the office and my two boys off to kindergarten and preschool. The frustration rises as I watch the clock ticking and notice that my 6-year-old is still in his pajamas.

Then an angel steps in. She speaks a few soft words to Blake, and he puts his shirt over his head. Said angel floats to Kyle, performs the same magic, and he lifts the spoon to his mouth.

“How do you do that so easily?” I asked.

When I commiserate with my friends about life in the parenting trenches, we marvel at our parents’ ability to calm our children, kiss those boo-boos with an extra dose of affection, and gain the undying admiration and fealty of a demographic not exactly known for its acquiescence. Our children love us, but they adore Grandma, Grandpa, Pappy, Nana, Meemaw, and Abuela.

Countless academic studies, newspaper articles, and memoirs alike confirm our children’s seal of approval about their grandparents. They share doses of wisdom and knowledge gleaned from decades of life experience, offer gentle discipline and correction when needed, and provide an additional helping hand to their adult children navigating the ups and downs of parenthood.

An oft-cited University of Oxford study goes further, noting that children who had a high level of interaction with their grandparents displayed fewer emotional and behavioral issues.

Fortunate are the children with loving grandparents in their lives. For those of us in the West, their presence can be a luxury, as grandparents don’t always fit into our nuclear family ideal. Career and educational opportunities can push adult children far from their families and cities of origin, and sometimes, grandparents take a less involved role by their own volition or their children’s choice.

When I married and moved to another state with my then-husband for his job, I envisioned our parents visiting every few months and staying for a week or two to interact with the grandchildren before returning to their calmer lives as empty nesters. My husband and I would then have our home back and our lives would continue as normal.

I thought that’s what we’d all want to maintain a sense of space and separate lives. That’s not how it turned out.

After my father died in 2015, my mother began to visit more often. Blake, then 3, noticed her absence when she left. If more than a month passed between her visits, he started asking for her. Each phone call ended with him questioning when she’d be coming back.

They easily picked up from the last visit when she returned, with Blake chattering about dinosaurs and robots and asking for hugs and kisses at night. My mother, a retired teacher and principal, affirmed his every word. During school breaks, she reached into her deep educator bag of tricks and held school, reinforcing his preschool lessons on letters, numbers, shapes, colors, and art. He never complained about going to “Grandma School.”

Two years later, my fragile nuclear family bubble popped. My husband and I started the divorce process, and I prepared myself for a future as a single mother of two. A different side of my mother emerged, as she strengthened her efforts to ensure that my children and I would survive the fracturing of our family.

Here was a woman who had never driven more than 45 minutes on the highway for the entirety of my childhood and was now traveling three to four hours on the interstate every two weeks to see her grandchildren. At 73, she transformed into a long-haul driver. Once here, she got to work picking up children from school, preparing dinners, and getting them to bed on nights I worked late.

“I had a choice,” she told me. “I could stay scared to drive, remain at home, and miss out on a relationship with my grandchildren. I decided I was going to be there for them.”

I regret the fact that it took divorce to help me appreciate the benefits of an extended family structure that many families around the world accept as the norm. I used to envision my mother finding a nice condo nearby so she could “have her space” and still visit her grandchildren at will, but maybe it’s better for all of us to put that space in our home, even if I do remarry.

I’m not saying this approach is best for all families, but for mine, it just might be.

As I watch my mother in action, I imagine that the grandparent stage is akin to driving in cruise control. Grandparents have raised their own children and no longer worry about the minutiae of infancy and childhood. They can simply enjoy the process, love their grandchildren to bits, and adore them despite their terrible twos and threenager years, knowing this too shall pass. They still feel a deep sense of responsibility about their role in their grandchildren’s development, but the innate calm they demonstrate while grandparenting is reflective of experience and knowing that the kids are going to be alright.

Although there’s little debate about the positive influence of involved grandparents on their grandchildren’s lives, I wonder what grandparents get in return. I often worry that I’m asking too much of my mother and imagine she’d rather be relaxing on a tropical beach enjoying her well-deserved, munchkin-free retirement.

Then she calls me after going home for a week. She asks how the boys are doing, telling me she misses them terribly and that a week is too long to be away.

I tell her that they ask about her, too. They walk to the guest bedroom looking for her when they wake up in the morning or sit by the window watching for her car.

As appealing as that tropical vacation might sound, her answer tells me that the grandchildren aren’t the only one receiving a benefit from their relationship.

“I’ll be there this weekend,” she says.

Shannon Shelton Miller lives in Dayton, Ohio, and is the mother of two boys ages 3 and 6. She writes about education and parenting, among other topics, and has been published in The New York Times, The Washington Post, and the Huffington Post. Follow her on Twitter @ShannonSMWrites.