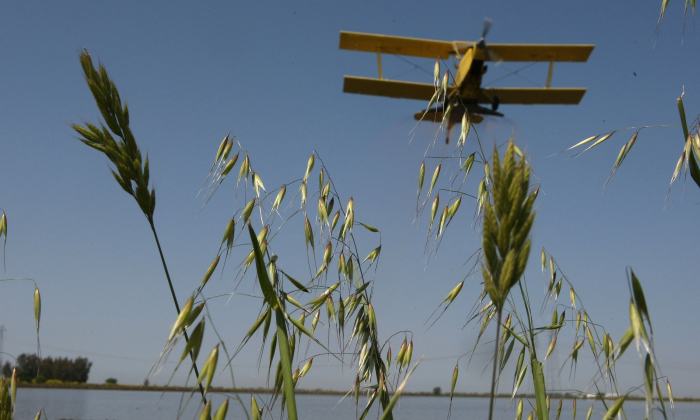 A bi-plane from Williams Ag Service flies over wild grasses as it drops rice seeds on a flooded field in Biggs, Calif. on April 25, 2008. (Justin Sullivan/Getty Images)
US News

For the First Time Ever, United States Sells Rice to China

One of the largest private importers of rice in China recently bought rice from the United States for the first time ever, according to a statement from Sun Valley Rice, the U.S. company that secured the Chinese contract.

The Chinese importer bought two containers of medium-grain rice from the California-based company during the week of June 23 in the midst of a trade war between Beijing and Washington. President Donald Trump said on July 1 that China agreed to buy agricultural products from the United States, but it isn’t clear if the rice sale is part of that concession.

Sun Valley Rice has worked to get into the Chinese market since 2004, according to Ken LaGrande, the company’s CEO.

“Fifteen years of patience and hard work have paid off,” LaGrande said in a statement. “It is truly an honor and a privilege to blaze this trail of trading history—American rice in China. Our team has worked with incredible tenacity and diligence to reach this point.”

The Chinese purchaser, Shenzhen Yintuo, part of the Dragon Ocean Hing Group, will receive the order in time for the Mid-Autumn Festival in September.

Most of the rice imported into China currently comes from Thailand, Pakistan, and Vietnam, which produce long-grain varieties. The Californian medium-grain rice is considered a premium variety, based on its taste, aroma, and texture, according to Sun Valley Rice.

“We chose Sun Valley Rice because when we first toured the U.S., we went to California and witnessed that Sun Valley Rice had clearly studied Asian cultures deeply, especially Japanese and Chinese,” William Li, vice president of Dragon Ocean Hing Group, said in a statement.

Chinese officials agreed to allow imports of U.S. rice in July 2017, following years of negotiations. But a nearly year-long trade dispute between the two countries threatened the first sale.

“It looked dicey for us for a while, with the hostility going back and forth,” said Michael Klein, a spokesman for USA Rice, a trade group that promotes the sale of U.S. rice. “We were about to have a market, and saw it snatched away, or so we thought.”

The LaGrande family has been growing rice for five generations in the Sacramento Valley, one of the most fertile agricultural regions in the United States and among only a few places in the world capable of growing both short- and medium-grain rice, according to Sun Valley Rice.

“This sale marks a turning point for the U.S. rice industry and its relationship with China,” Betsy Ward, president of USA Rice, said in a statement. “We’ve spent decades chasing this enormous market, and the Sun Valley Rice sale is the first ever of U.S. rice to a private importer. It is truly historic and sets the stage for continued regular trade with China for U.S.-grown rice.”