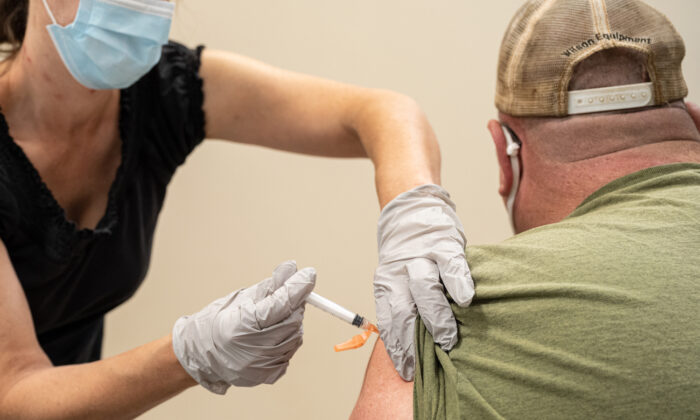 For Pennsylvania Veteran, Trust Is Missing Element in Vaccine Mandate

"At what point do I say no?"
By Beth Brelje

“I was gassing up my car getting ready to go get the vaccine, when I saw some social media that made me question it spiritually. I dropped the idea of getting vaccinated immediately,” a federal civilian working in Pennsylvania for the Department of Defense told The Epoch Times in a phone interview.

We are calling him Victor. Disclosing his real name or specifics of his workplace could cost him his job, and he is trying to hang onto it, although he may lose it anyway, because “Victor” says he is definitely not getting the COVID-19 vaccine mandated by President Joe Biden.

In addition to having a serious health issue that makes him leery of the vaccine, Victor’s faith tells him to refrain from putting impurities in his body. His time in the military tells him a few things too.

“I learned two things in the military: Anything you don’t know, like bombs and firearms, can get you wrecked; and, the government needs to test some of its equipment on you.”

He sees too many reasons not to trust the government.

“This agreement we have between the people and the government, there is a trust factor,” Victor said. “People are saying no, I’m not going to get a vaccine because I don’t trust the people mandating it.”

He has asked his employer for a religious and health exception. Victor’s hope is that he will get an approval and then get a workplace accommodation, such as being allowed to work from home, wear a mask, or get regular testing.

If he continues to resist the vaccination, Victor says his employer will require him to undergo counseling where he will be educated about vaccines.

“It harkens back to the early 20th century communists, where they provided education to anyone who would not tow the party line,” Victor said. “I’ll have to see how it goes when they do it. I have a feeling they will put the screws to me.”

If all legal avenues are exhausted and attempts to hang onto his job fail, he figures his career of nearly 20 years is blown.

“It will mean the loss of health insurance when I have a health condition, and I wouldn’t be able to get a federal job again if they let me go with a discipline. It will cost me money and the stress of what is going to happen next. My wife might get fired too. Then we will lose our house and become homeless.”

He wonders what the country is going to do when everybody who doesn’t want the vaccine loses their job. And he wonders where the mandates will end. Because maybe the vaccine isn’t the last requirement.

“If we don’t stop this now and put our foot down, this is going to get out of hand. People are going to have to start standing up because eventually they are going to ask you to do something you can’t do.”

When you join the military, you learn your duty as a patriot, Victor says, but every family man has to make a decision, “at what point do I say no?”

“I have a friend saying yes to vaccine. He says his breaking point is his children. What if he has to save his job by making his children get vaccinated?”

For Victor, the shot is his breaking point, and with the rules of COVID-19 vaccination constantly changing, trust in the government’s plan is a tough thing to muster.