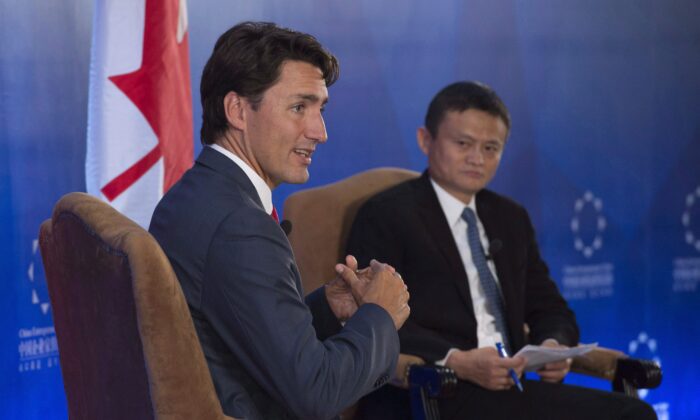 Prime Minister Justin Trudeau responds to a question as Chinese business magnate Jack Ma listens, during an event at the Chinese Entrepreneur Club in Beijing, China, on Aug. 30, 2016. (The Canadian Press/Adrian Wyld)
Viewpoints

The Trudeau government is apparently in the process of rethinking its China policy to make it more adaptable to current challenges. The Globe and Mail reports that the government is “designing its first strategy that encompasses the entire Indo-Pacific region” and will ostensibly focus on the increasing threat from the Chinese regime.

Heading the special secretariat at Global Affairs responsible for devising the strategy is former diplomat Jonathan Fried, who once served as ambassador to Japan and the World Trade Organization, and in 2015 was co-chair of the G20’s Trade and Investment Working Group with China.

This new strategy will seek to diversify trade and partnerships in the Indo-Pacific region, with the aim of establishing a reliable coalition of countries.

Skeptics who have long been disappointed by the government’s talk of a “new China policy” only for things to remain the same may dismiss this new development, and understandably so. But broadly speaking, the move is definitely intriguing.

However, it may not please the powerful people who have hitherto enjoyed a monopoly on our “same-old” way of dealing with China. Because for any such strategy to succeed, these people must see their clout in the China debate decrease significantly. I’m referring in particular to the Canada China Business Council (CCBC), whose members include multinational corporations from both Canada and China such as Power Corp., Barrick Gold, Bombardier, and Huawei Technologies. “Claws of the Panda” author Jonathan Manthorpe has said that since its establishment in 1978, the CCBC has been the Chinese Communist Party’s “principal channel for influence in Canada.”

Evidence of that influence can be seen in the case of former CCBC president Peter Harder, now a leading senator who had a key role in Justin Trudeau’s transition to office in 2015. Harder made headlines in June of this year when he opposed a motion in the Senate to define the Chinese regime’s persecution of Uyghur Muslims as genocide. And Canada’s Ambassador to China Dominic Barton is a CCBC enthusiast and regular attendee who reiterates all the organization’s talking points in regard to Ottawa’s China policy.

As Manthorpe summarizes in “Claws of the Panda,” his masterful study of Chinese influence in Canada, a pivotal figure in the forming of the CCBC was an academic named Paul Lin, who served as the first director of McGill University’s Centre for East Asian Studies from 1965 to 1982. He played an instrumental role in facilitating the initial diplomatic talks between Ottawa and Beijing.

In 1977, Lin was approached by Paul Desmarais, head of Montreal-based Power Corp., about organizing a business trip to a Chinese trade fair in Guangzhou Province. This catalyzed a process that would lead to the establishment of the CCBC (initially the Canada-China Trade Council) at the behest of figures like Desmarais and Maurice Strong, who was the chief executive officer of Petro-Canada at the time. Founding companies included staples such as Manulife Financial Corp., BMO Financial Group, Power Corp., and the now infamous SNC-Lavalin.

This network of companies, especially Power Corp., entrenched itself as the prime adviser for Canada-China relations, successfully making trade the main focus and omitting everything else. “In Canada, Power Corp. was the premier gatekeeper of this country’s formal relations with China,” Manthorpe writes.

Indeed, these organizations still assume the role of gatekeeper in their attempt to avoid at all costs any real questions of values or geopolitics, and to stifle those who emphasize those issues in discussions on China. It is regularly lamented by those with financial interests in China that “geopolitical issues” have become more of a focus at the expense of Canada’s financial interests. Human rights violations are treated as immaterial and mere disagreements rather than crucial moral questions about the West’s duty to hold repressive regimes to account. It’s all for the sake of a myopic obsession with a single market for which it is not that difficult for Canada to find more productive and trustworthy substitutes.

Inevitably, a successful Indo-Pacific strategy that moves on from prior dogmas must involve some sort of decoupling from an increasingly belligerent Beijing. With that in mind, the power and prestige the CCBC has enjoyed for the better part of the last 43 years presents a significant obstacle.

The time has come for that to change. Beijing’s ruthlessness in abducting two Canadians and holding them hostage over the Meng Wanzhou affair, which led to the current frosty state of Canada-China relations, is ample reason members of this organization should rein in their push for ever-greater ties with the communist regime.