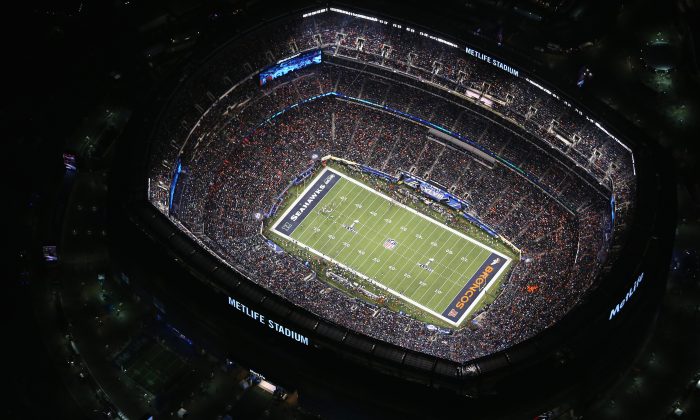 The Seattle Seahawks and the Denver Broncos play in Super Bowl XLVIII at the Metlife Stadium at Rutherford, N.J., on Feb.2, 2014. (John Moore/Getty Images)
Business & Economy

Imagine a winning stock play that can be had simply by looking at the sports page. Forget chart watching, P/E ratios, and 52-week highs and lows: Just look at the corporate sponsor of the NFL stadium hosting “Monday Night Football” and do a quick buy the next day if the home team wins.

Stocks of corporate sponsors of the host team’s stadium on the NFL’s longest running prime-time show go up an average of 0.51 percent when the home team wins—and down 0.01 percent if they lose, according to a study by Assaf Eisdorfer, an associate professor at the University of Connecticut’s School of Business, and Elizabeth Kohl, an assistant professor at UConn’s Carl H. Lindner College of Business.

The study, which will be published in an upcoming volume of Critical Finance Review, collected data from 3,399 games during the preseasons, regular seasons, and postseasons of 21 teams with 26 stadium sponsors from 1997 to 2013.

While all regular season home games weren’t taken into effect due to the comparatively lower national exposure of Sunday afternoon games, “Monday Night Football” was its own category because of its prime-time nature and being broadcast on TV across the country—similar to postseason games.

Come playoff time though, the stock play is significantly different and not good news for shareholders. The spread between a win versus a loss for the host team’s stadium sponsor jumps to 0.82 percent, yet either way the stock is dropping—negative 0.19 percent for a win versus negative 1.01 if they lose.

Why the negative both ways? Eisdorfer and Kohl came to the conclusion that the high-pressure, single-elimination playoff format is to blame. A postseason loss ends the team’s season on a down note, while a home win is usually expected (since the home field advantage generally goes to the team with the better record), and a win only guarantees one extra game.

Meanwhile, regular season games with an unexpected outcome can be a boon or bust for share prices. An upset where the winning team was at least a five-point underdog, or outcomes where a team snaps a three-game winning or losing streak, have nearly the same spread (0.81 percent) as the playoff games have, but in this case, unexpected win yields a positive return (0.58 percent), while losing has a negative effect (negative 0.23).

The study acknowledges the possibly unique situation that New York Giants and Jets fans may have, given how many fans there are in the nation’s biggest city, how close they play to the New York Stock Exchange, how many fans actively trade stocks, and that the two teams now share the corporate sponsored MetLife Stadium.

Unfortunately, since the sponsorship wasn’t arranged until 2011, there hasn’t been enough data yet for a regional study.

But if you want to study the Monday night results on your own while watching the NFL’s popular prime-time show, there will be plenty of opportunities. Eleven of those 17 prime-time matchups take place at stadiums with corporate sponsors.