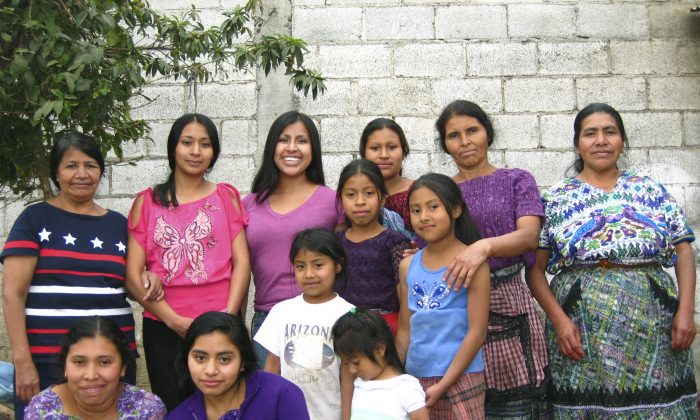 Gemma Givens- background third from left- with relatives in Santiago, Sacatepequez, Guatemala in March 24, 2012. (Courtesy of Gemma Givens via AP)
US

For Many US Adoptees From Guatemala, a Complicated Legacy

NEW YORK— Scattered across the United States are more than 29,000 young people born in Guatemala and adopted by U.S. families before that troubled Central American nation shut down international adoption in 2008 amid allegations of rampant corruption and baby-selling.

Today, as adoptees come of age, many want to know about their birth mother and why she gave them up and wonder about the murky circumstances of adoption. Some have traveled to Guatemala to investigate.

“Guatemala was all I could think about,” said Gemma Givens, a 25-year-old adoptee in California, who has made two trips to the country to learn what she could.

“I was just a mess,” she said, “the questions, the wondering, the pain, the desire to heal and to figure it out.”

International adoptions from Guatemala began to surge after a 36-year-civil war ended in 1996. Tens of thousands of civilians disappeared or were killed during the conflict, leaving legions of children without care. Orphanages overflowed, and American families seeking to adopt soon learned there was a vast supply of infants being made available.

By 2006, more than 4,000 Guatemalan children annually — about 1 of every 100 babies — were being adopted by American families, and the small country became the second-largest source of adoptees after China. Huge sums were at stake — American families routinely paid $30,000 or more to Guatemalan lawyers to arrange an adoption.

Then, as evidence of corruption mounted, the pipeline closed. Adoptions to the U.S. dropped to 27 last year.

Roughly half of all the adoptions by Americans entailed some type of impropriety — from outright abduction of infants by Guatemalan racketeers to baby-selling to various types of coercion and deception that induced mothers to relinquish their children, according to Carmen Monico of Elon University. The professor of human service studies has conducted extensive research on adoption in Guatemala.

Monico expressed empathy with adopting families, saying, “They had their hearts in the right place.” But she also has documented the experiences of Guatemalan mothers who believe their children were abducted to meet the demand.

“Some of these women have been searching for their children for years,” Monico said.

“After we brought our son home, I became more and more concerned,” said Laura Hernon of Seattle, who with her husband adopted a boy from Guatemala in 2008, just before the shutdown. She wondered, “Is there a mom who was duped out of her baby?”

The couple investigated, and determined anew that the adoption was legitimate.

“What would we have done if otherwise? I have no idea,” Hernon said.

Many are reticent, said Givens, suggesting one reason is that many Guatemalan adoptees know little about their birth mothers and are uncertain whether their adoptions were legal.

“That’s everybody’s first question when they join this community: How do I find my mother?” Givens said.

Her own search took her to Guatemala, where she sought out the lawyer who handled her adoption, and she now thinks she knows the basic story: Her birth mother was an illiterate indigenous woman who worked as a housekeeper, was impregnated by her employer, and decided to relinquish the baby.

“It hurt to not know where I came from, so the logical answer was to go figure it out,” Givens said. “I’m ready to start my life now.”