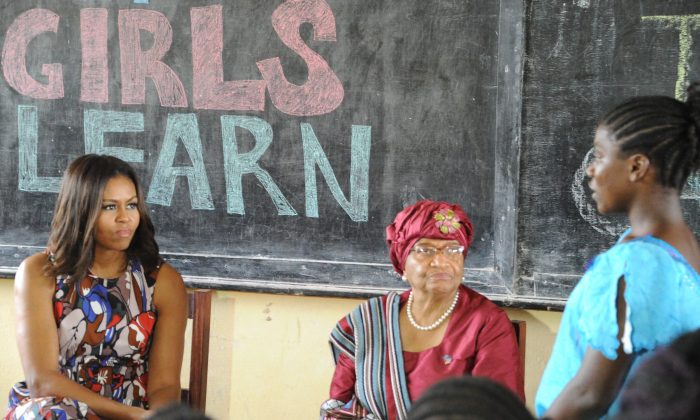 First lady Michelle Obama visits a woman education program in Monrovia, Liberia, on June 27. US First Lady Michelle Obama told girls in Liberia on Monday to fight to stay in school, as she visited the west African country where the vast majority drops out due to financial pressures. (ZOOM DOSSO/AFP/Getty Images)
Education

For Girls in Liberia, Going to School Is a Delicate Venture

Jomalin Kamara is one of the lucky few young girls in Liberia who completed primary school. And it wasn’t easy—there were cultural quagmires she had to navigate along the way.

The established culture is to educate boys but not girls, Kamara says.

Only 7 percent of boys and girls combined complete primary school in the West African nation, according to the Education Policy and Data Center. Only 37 percent of young women in Liberia are literate, according to UNICEF. The literacy rate for young men is nearly twice that, at 68 percent.

“Culture plays a key role,” Kamara, 21, said via Facebook. “For example, my mommy, she didn’t finish school when she was with her parents because their culture supports only boys going to school. And for most parents, they strongly believe in their culture. They will do everything to never go against it.”

Kamara is grateful for the sacrifices her parents made for her to pursue an academic career. She is currently studying statistics at the National School of Statistics and Applied Economics in the Ivory Coast on a full scholarship.

“I’m not the only child, so [my parents] had to take care of every one of us [sic] school fees,” said Kamara. “My dad repaired watches to send us to school. For that I’m grateful.”

Ironically, in a family of four children—two girls and two boys—Kamara and her sister are the only ones to pursue higher education.

Kamara’s advice to other girls who seek to convince their families that education won’t destroy their culture comes from experience. More than a third of Liberian women are married by the time they are 18 years old, according to stats released by UNICEF.

“I will tell her to convince them by secretly going to school, make good grades, still be intelligent and humble, and show her parents that you can be educated and still be a good housewife—because that’s what they are afraid of,” said she said.

Perhaps the most obvious cultural anomaly in Liberia right now is its president—Ellen Johnson Sirleaf, a Harvard-educated woman. Sirleaf is the first female to be elected as a head of state in Africa.

First lady Michelle Obama, along with her mother and two daughters, met with Sirleaf recently when they traveled to Liberia to promote girls’ education. Obama is also a Harvard alumni and her daughter Malia intends to start there in the fall of 2017.

“It’s always a privilege to travel with my mom and my daughters, because I want them to see the world,” said Obama at the Peace Corps Training Center in Kakata, Liberia. “I want them to get to know your stories and understand what you go through and just how hard you’re working to get your education.”

While in Liberia, Obama promoted the Let Girls Learn initiative, a program launched in March 2015 by the U.S. government to help adolescent girls “attain a quality education that empowers them to reach their full potential,” according to its website.

Students at the R.S. Caulfield school in Unification Town listened to Obama share about the opportunities that are possible with education. Obama also heard stories like Kamara’s from the young girls at the school—there were 334 girls among the 1,034 student population.

“When I was your age, if anyone had told me that I would be the first lady of the United States of America, I would have laughed at them,” Obama told the girls. “Because growing up, in that space, there had never been an African-American president, let alone an African-American first lady. So to be where I am today is basically doing what many people thought was impossible.”

While in Liberia, Obama established several new initiatives to support education reform for girls in Liberia. The United States Agency for International Development will dedicate up to $27 million to Let Girls Learn.

The Education Quality and Access in Liberia (EQUAL) initiative aims to promote safe school environments for approximately 3,864 adolescent girls in Grand Bassa by preparing school administrators with the tools to improve gender equality in education and respond to and prevent school-related, gender-based violence in 10 communities across Liberia.

Ten Liberian counties will get $20 million to be allocated as a monthly take-home ration to families of young girls who maintain an 80 percent or higher attendance rate at school. The funding is available for girls in grades 4 through 6 and is part of the U.S. Department of Agriculture’s McGovern-Dole International Food for Education and Child Nutrition Program.

Let Girls Learn is a collaborative effort with the U.S. Department of State, U. S. Agency for International Development (USAID), Peace Corps, Millennium Challenge Corporation, and other agencies.