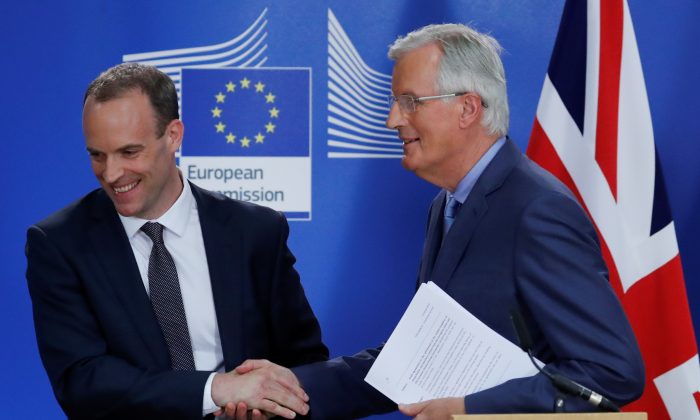 LONDON—For the first time since Britain voted to leave the EU, more people want a second referendum on the final Brexit deal than those who don’t, according to a new poll.

The EU and UK currently are negotiating the Brexit deal that will determine whether Britain remains close to the EU, has a distant relationship with the bloc, or severs all ties.

Appetite for a public referendum on whether to accept or reject that final deal has fitfully risen over the past year.

In a poll published by YouGov on July 27, the number of people wanting a referendum reached 42 percent, compared with 40 percent who do not want one, even as the government has consistently ruled out the possibility of any kind of second referendum.

The poll comes as the EU’s chief negotiator rejected a key proposal in Prime Minister Theresa May’s Brexit plans. That “soft Brexit” plan had cost May domestic political capital in a cabinet riven by divisions over Brexit, seen by some as conceding too much control to the EU.

The deal between the EU and UK potentially could include compromises on various issues that motivated people to vote to leave, including the ability to strike trade deals, control of borders, and influence of EU laws. The degree of compromise—with a “hard Brexit” at one end and a “soft Brexit” at the other—is a deeply divisive issue among lawmakers and within May’s own party.

The EU currently aims to wrap up negotiations in October—to allow time to put the deal to lawmakers and member states ahead of the official day of the UK’s departure from the trade bloc on March 29, 2019.

With the clock ticking on negotiations, preparations for a “no deal” scenario—in which the EU and UK fail to reach a mutual agreement—are being ratcheted up across the continent.

If the UK fails to strike a deal with the EU, then it will “crash out,” automatically adopting WTO rules. This could bring about a “cliff-edge” scenario—with regulations, infrastructure, and business not ready for the sudden shift in trade arrangements—with some warning of logjams at customs checkpoints across the EU.

On July 26, EU chief negotiator Michel Barnier said that about 80 percent of the withdrawal agreement—which covers issues such as security, future rights of EU citizens in the UK, and the Irish border—had been agreed upon.

“In contrast, on our future economic relationship, it comes as no surprise that finding common ground between the EU27 and the UK is more difficult,” Barnier told reporters.

May has said that the UK cannot remain within the Customs Union of the EU, describing it as one of her “red lines.”

In her Brexit blueprint, she proposed a bespoke customs arrangement with the EU, with the UK collecting and managing EU tariffs under a “common rulebook” to smooth the flow of goods that would otherwise get stuck in border checks and processes.

Barnier rejected this plan, saying: “The EU cannot—and will not—delegate the application of its customs policy and rules, VAT, and excise duty collection to a non-member, who would not be subject to the EU’s governance structures. Any customs arrangements or customs union—and I have always said that the EU is open to a customs union—must respect this principle.”

Barnier said that the EU respects that the UK wants to take back control of its money, law, and borders.