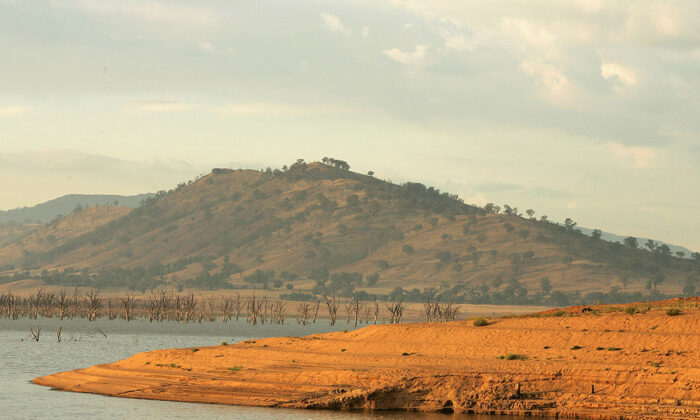 A veiw of the Hume Weir at sunrise on February 23, 2007 in Albury, Australia. The Hume Weir is the largest dam on the River Murray. (Robert Cianflone/Getty Images)
Australia

Forecast heavy rainfall could see a Victorian dam spilling for the first time in 26 years, potentially contributing to flooding downstream.

The Dartmouth Dam has overflowed only four times since its completion in 1979, the last time being in 1996.

“We are actively managing both Hume and Dartmouth Dams, and our river operators are working around the clock to assess new inflow and weather information and to manage releases accordingly,” Davis said.

The MDBA began releasing water from Dartmouth Dam in early August to provide space for inflows and mitigate downstream flooding.

Dartmouth Dam is the highest capacity dam in Victoria, storing almost four million megalitres when full. It is currently at 98.8 per cent capacity.

Further downstream, the Hume Dam is holding 96 per cent of its more than three million megalitre capacity.

Davis said a large rainfall event with significant runoff would pose a significant flood risk both up and downstream of the Hume Dam.

“There is an increased chance of flooding this season in the Murray River and right across the Murray-Darling Basin,” he said.

There are minor flood warnings issued across Victoria’s northeast, southeast and central northwest.

“Those living along the rivers need to stay informed and know what to do in an emergency,” he said.

The Bureau of Meteorology has predicted there is a chance of a wetter than average spring and rated the chance of a La Niña weather event returning at 70 percent.

With soils and catchments still soaked, further spring rainfall will increase the risk of flooding for eastern Australia, it warned.

TO PREPARE FOR FLOODING:

* Sign up for WaterNSW’s Early Warning Network to get alerts of Hume Dam releases: www.waternsw.com.au/supply/ewn

* The SES is responsible for helping communities and individuals during a flood. Local Councils manage road closures and work to keep their community informed about road closures.