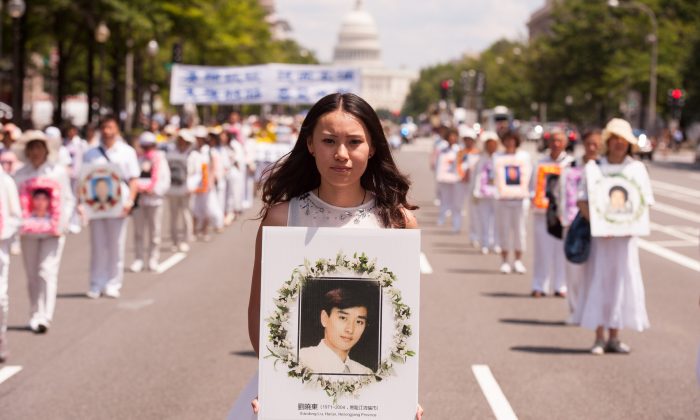 Falun Gong practitioners march in a parade calling for an end to the persecution in China, as the U.S. Capital building is in the background, in Washington, on July 17, 2014. (Dai Bing/Epoch Times)
US News

For Chinese Meditators, April Was the Cruelest Month

Hundreds of Chinese who practice the spiritual discipline Falun Gong were detained by Chinese police during April, often on dubious legal charges, representing the biggest spike in arrests of Falun Gong practitioners over the last few years.

A staff member of the Chinese version of this newspaper, Teresa You, 24, is among those personally affected—her parents disappeared almost two weeks ago, with not a word from the authorities.

“Teresa, you need to be strong no matter what happens,” her friend in New York told her with a trembling voice, when she first heard the news.

A pause. “Your mother is probably in prison.”

“I was stunned,” said You, who is based in Washington, D.C., in a statement she read at a recent protest rally outside the Chinese Embassy. “Just days ago I was on the phone with my parents, who asked me to stay safe.”

You later found from her aunts in China that on the morning of April 21, police broke into the family home in the Haidian District of Beijing and detained her father and mother, You Zhaohe and Wang Lurui, and seized their personal computers. They’re being held in a “pretrial phase” the police told her relatives, and aren’t allowed visitors.

You’s parents were arrested for practicing Falun Gong, a traditional Chinese spiritual discipline whose adherents do slow moving exercises and live by the principles of truthfulness, compassion, and tolerance. Because the practice brought health benefits and moral elevation, it quickly spread through word of mouth in China—in 1999, there were an estimated 70 million to 100 million Falun Gong practitioners in the mainland.

Obsessed with Falun Gong’s immense popularity and growth, former Chinese leader Jiang Zemin ordered the Communist Party to repress the practice in July 1999. Falun Gong practitioners were forced out of their jobs and schools, and routinely rounded up and sent to labor camps for torture and brainwashing. The Party also launched a massive anti-Falun Gong propaganda campaign both nationally and abroad.

About 3,000 persecution deaths have been verified by Minghui.org, a Falun Gong information website, although the actual number is estimated to be in the tens of thousands. International investigators also reported in 2006 that the Chinese regime was forcibly removing organs from detained Falun Gong practitioners for sale.

According to Minghui, 589 Falun Gong practitioners were detained in April—the highest monthly total since Chinese leader Xi Jinping took power in November 2012. There were 3,506 arrests in 2014, and 1,450 in the first quarter of 2015.

You has faced the traumatic situation of having her parents taken away by the authorities for Falun Gong activism multiple times before.

When she was just 9, police broke into You home one summer day, handcuffed her parents in front of her grandparents and her, and whisked her parents away just as her father tried to approach her to reassure that everything was going to be fine.

Mr. and Mrs. You were sent to a “re-education” camp—likely a brainwashing facility—for a month, but refused to give up practicing Falun Gong, which had improved their health.

Mrs. You had suffered a number of chronic diseases, but they gradually went away after she took up the practice in 1996. Seeing his wife get healthy and even gain weight, Mr. You, a philosophy professor at the China University of Political Science and Law, decided to take up Falun Gong.

Despite knowing the perils of being a Falun Gong practitioner during the persecution, You’s parents persevered in their faith and participated in protests and tried to tell people about the truth about Falun Gong because they knew there was nothing wrong with the practice. For this, they were detained several times by the police.

Eventually, You’s parents left home in 2001 to avoid being arrested, but their move was in vain—a year later, You’s grandmother received a phone call by the police informing her that Mr. and Mrs. You had been arrested again. This time, they were sent to a labor camp for a year, where they were repeated abused and tortured—Mrs. You was once not allowed to shower for a month as “punishment.”

To make sure Teresa You was put out of harm’s way, her parents sent her to the United States for school in 2008, where she attended Ohio State University.

You stayed safe in America and even had the freedom to do all that her parents found extremely challenging in Communist China—practice Falun Gong openly in parks, and participate in protest rallies and parades, which explain and expose the Party’s persecution of Falun Gong.

But her parents doggedness in standing up for their belief was matched by the authorities’ desire to stifle them, and they were taken in again on April 21 this year. This time, it seemed serious. “I heard that my dad has been moved to a security bureau-run hospital because he had a heart attack,” Ms. You said.

Upon confirming her parents detention by personally calling the police station whose officers kidnapped her parents, You and Falun Dafa practitioners in Washington, D.C., decided to hold a protest rally outside the Chinese Embassy. On April 30, Teresa You and about a dozen others held large placards bearing pictures of Mr. and Mrs. You, as well as wording asking that they and the 31 other Beijing practitioners be released.

You has also petitioned her local representative to ask the Chinese regime to immediately release her parents.

When asked to comment on the issue, New Jersey Congressman Chris Smith told New York-based New Tang Dynasty Television, “The obsession that the Communist leadership has had with mistreatment, including torture and death, execution of Falun Gong practitioners, just begs response from Washington, the United Nations, to tell the Chinese government to cease their persecution of these good, law-abiding people.”

Teresa You did try to call the Beijing police station, which held her parents to demand their release, but was cut off by the person on the end of the line, who said, “We’re just following orders from our superiors.”

“The police officers from the Cultural Revolution who were prosecuted in Yunnan and the Nazi officials who are still being prosecuted today probably felt they too were ‘just following orders,'” Teresa You told Chinese language Epoch Times.

But seeing how top-ranking Chinese officials who played a prominent role in the persecution—Zhou Yongkang, Bo Xilai, Li Dongsheng—have all been purged in recent years, You believes that the police who arrested the Beijing Falun Gong practitioners should “reflect on their actions.”

“I wish that they could think about their futures and not be blinded by short-term benefits, otherwise they will make choices they will come to deeply regret,” Teresa You said.

Update: Teresa You’s parents were released in late May 2015, about a month after they were detained.