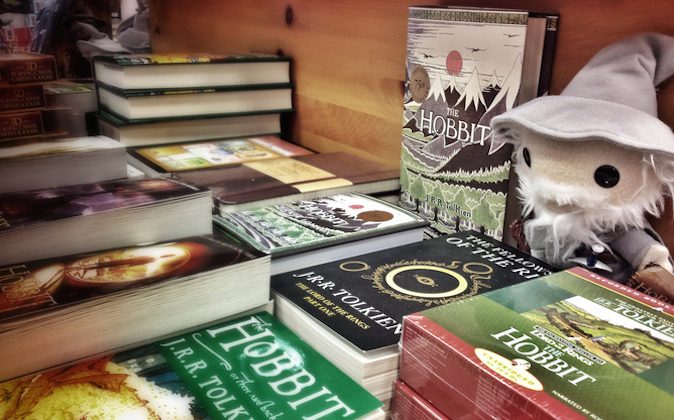 For Another View of World War I, Look to Lord of the Rings

In the year of the World War I centenary, much renewed attention has been paid to war poets Wilfred Owen and Siegfried Sassoon and tables in bookshops are groaning under the weight of their work. These are poets who have done much to shape the perception of war in British modern culture. But there are alternative views of war – in less obvious places.

A small auction taking place might provide an opportunity to look at an example of this. A previously unpublished letter by JRR Tolkien is expected to fetch £6,000-£8,000 ($9,900-$13,200), along with a first edition of The Hobbit.

Tolkien has been described as many things – a linguist, lexicographer, medievalist, novelist, poet, and fantasist. His legendarium, the collection of myths and legends he developed over a lifetime and brought to life most wondrously in The Hobbit and The Lord of the Rings, is loved and occasionally loathed, but rarely is he described as “modernist,” a writer responding to the major issues of the 20th century – notably, the two world wars.

So to suggest that Tolkien could be included in the same category for example as Owen, Sassoon or Graves may seem far fetched, but under closer scrutiny, it is perhaps not so.

Tolkien was of that unfortunate generation that was of the age to fight in World War I and see his children fight in the World War II. He graduated from Oxford in 1915 and then enlisted, serving as an officer in the 11th Lancashire Fusiliers. His wartime experience was brief but concentrated.

He describes how he witnessed the “animal horror” of the trenches in a later letter (see his Letters edited by Humphrey Carpenter, p. 72), and he discovered soon that his schoolfriend Robert Gilson had died in the first day of fighting. Yet to some it may seem surprising that outside of a few letters, or brief allusions, Tolkien’s writing on the war is notable by its absence.

Even his friend and kindred spirit C S Lewis, who also served briefly on the Western Front, contributed to the canon of war poetry with poems such as French Nocturne (Monchy-Le-Preux). But nothing like this, and certainly nothing to rival Sassoon’s bitter cynicism or irony, or Owen’s poetical manifesto around pity for the suffering of the soldier or his warnings to future generations, seemingly interested Tolkien. But is this necessarily true?

While it is dangerous to attempt to retrospectively impose influences, sources, and analogues on a writer there is undoubtedly evidence within Tolkien’s writings to indicate that the Great War had a profound effect on him and surfaced, occasionally, in his fiction.

Scholars have noted the fact that the germs of his mythology really began to take root during the World War I. Notable examples that are often cited include the passage through the Dead Marshes and the landscape of Mordor, which is likened to the destruction Tolkien witnessed on the Somme. And characters such as Sam the Hobbit are seen to be Tolkien’s vision of the epitome of the British soldier, determined to see it through no matter what.

Despite this, Tolkien is often accused as being “escapist,” retreating from the horrors of the twentieth century into his own “safe” mythology. Tolkien himself was aware of this general accusation when it came to fantasy, but argued that there was nothing wrong with a prisoner wishing to escape from their confines, even if only in imagination.

But Tolkien was not intent on simply creating another world that people could enter to forget the trials of everyday life. His vision advocated the creation of a world that was so credible that we could immerse in it and enter into a state of secondary belief. This would then allow him to present some major themes, albeit in a fantastical way, that would be both believable and pertinent.

Fantasy allowed him free expression to do this, but the applicability of the themes he explored to our own world was always present. There are of course the ever-present concept of good vs evil (represented both by the opposing forces in Middle-earth but also by the internal struggles the One Ring engendered), and the evidence of modernity’s power for destruction (such as Saruman’s desolation of The Shire).

But there are also themes one can apply to the struggles Tolkien witnessed in 1914-18 (and 1939-1945). The dominant evil powers – Melkor, Sauron, Saruman – are driven by pride and greed, seeking to conquer and to subjugate. To do so they make use of “machines” or “pseudo-science” (such as the interbreeding that produced Orcs and Half-Orcs). Facing these powerful forces are the hastily assembled Allies of the West, but in particular the real strength is found in collaboration between races/nations and the ability of the small, isolated individual (literally in the case of the Hobbits) to change world events.

Tolkien was at pains to point out that his work should not be taken allegorically, but is it not the case that these themes resonate with many of the choices and issues faced by the generations of 1914, 1939, and our own? And although one would not wish to limit Tolkien’s achievements to any single category (his mythology covers an extraordinary range of themes), why do we not consider Tolkien as, in part at least, a modern war writer – is it simply because the setting is mythological? Surely his warning to readers of the consequences of war is as pertinent today as Owen’s.