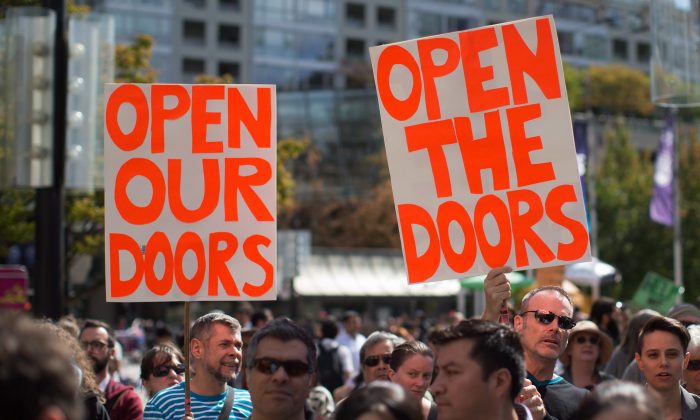 Two men hold signs as hundreds gather for a rally on Sept. 6, 2015 in Vancouver organized by the local Kurdish community to urge the federal government to allow more Syrian refugees into the country. Provincial calls for Canada to accept more Syrian refugees fail to address the crucial question of who would foot the bill, says an immigration expert. (The Canadian Press/Darryl Dyck)
Canada

VANCOUVER—As British Columbia joins other provinces pledging support for displaced Syrians, an immigration expert says calls for Canada to accept more refugees fail to address the crucial question of who would foot the bill.

University of Toronto sociology professor Monica Boyd said such requests amount to asking the federal government to pay the tab—about $35,000 per refugee family in the first year.

But the topic of funding is absent from the discussion taking place publicly between a growing list of provinces and Ottawa, she noted.

“They’re having a conversation in the middle of a marshmallow,” said Boyd, who is also the Canada Research Chair in Immigration, Inequality, and Public Policy. “What that means is there are certain things that aren’t being said, namely: ‘Where’s the money coming from?'”

Under current regulations, provinces are legally not allowed to sponsor refugees—only the federal government and private citizens have that power. But that hasn’t stopped provinces from chiming in with announcements ranging from demands to boost immigration numbers to provincial funding for refugee support programs.

On Sept. 7, Quebec announced it was prepared to take in 3,650 Syrian refugees by the end of the year—2,450 more than initially planned.

The province promised $29 million to assist in that effort, with most of the money going toward language training, job aid, education, and health care.

They’re not saying, ‘We will pay for these individuals to come,’ and in part they can’t because that is not their political mandate.
— Monica Boyd, University of Toronto

“They’re not saying, ‘We will pay for these individuals to come,’ and in part they can’t because that is not their political mandate.”

During Clark’s announcement in Vancouver, she emphasized that it wasn’t British Columbia’s job to decide refugee admission numbers.

Clark teared up as she spoke about the death of three-year-old Syrian refugee Alan Kurdi, whose lifeless body on a Mediterranean beach was captured in a photo that sparked grief around the world.

“Alan Kurdi and his family didn’t die because they were anything but unlucky enough to live in a country wracked by war,” Clark said, pausing to regain her composure.

“We are lucky. Alan Kurdi was unlucky. And our task is to make sure that we take more opportunities to share the great luck that we have as Canadians.”

Prime Minister Stephen Harper has been under pressure to admit more refugees, and he said he will—but while taking care to avoid allowing terrorists from a war zone into Canada.

“This government is committed to acting, committed to bringing more people in, committed to expediting the process. And frankly, I said this before this was in the headlines earlier in this campaign, we already made announcements and we’ll continue to look at how we can improve,” he said.

“But yes … we are talking about a terrorist war zone a lot of people are coming from. We will make sure we are also protecting Canadians from the security risk.”