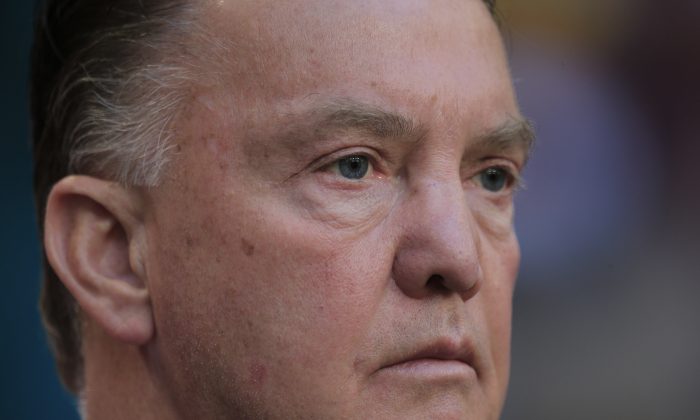 Though the Dutch team lacks tournament experience, and the luxury of some Galacticos stars that their Argentinian opponents will parade in this afternoon’s semi-final, their highly-regarded coach has squeezed a few moments of brilliance from his team during this World Cup. The knighthood he received, for his unprecedented successes with Ajax Amsterdam, is an indicator of the calibre of Aloysius Paulus Maria van Gaal.

However, it wasn’t through using kid-gloves that he catapulted to stardom, and the formidable sexagenarian has earned the nickname “the Iron Tulip” along the way.  Here we take look at back at some of his audacious moments and more audacious quotes, and get a glimpse into the mind of a football genius.

The ink on his contract to manage Manchester United had barely dried, when he ordered groundsmen to rip up some of United’s state-of-the-art grass pitches, wanting them replaced with mure durable semi-astro turf. Totalling a cost of 4 million pounds ($6.8 million), with the addition of floodlights, Van Gaal’s new policy will also cost United players their afternoons off, as they’ll be summoned for double training sessions.

His first action upon getting the Ajax job in 1991 was to congratulate them on signing the best coach in the world.

Fond of telling reporters that their questions are stupid, Van Gaal recognises that he’s a difficult one to deal with: “I am the way I am and I’ve not got an easy-going manner. But I’m not going to change my personality just because some people want me to.”

During his tenure at Barcelona, a director in the club proudly introduced his grandson, a 14-year-old Gerard Pique, to the manager. Eschewing conventional formalities, and not shaking Pique’s outstretched hand, Van Gaal instead barged the youngster to the ground and declared: “You’re too weak to be a Barcelona defender!” as he loomed over him.

“Running is for animals. You need a brain and a ball for football.”

Not all of his players or contemporaries have been impressed with his approach, however. Luca Toni, a player Van Gaal wasn’t fully content with, described a scenario where the then-manager of Bayern Munich demonstrated his willingness to omit any of the team’s stars from the starting line-up. He emphasised this point by dropping his trousers to reveal that he had the testicular fortitude to carry out his threat:

“The coach wanted to make clear to us that he can drop any player, it was all the same to him because, as he said, he had the balls,” said Toni. “He demonstrated this literally. I have never experienced anything like it, it was totally crazy. Luckily I didn’t see a lot, because I wasn’t in the front row.”

“You wonder whether he has one or two screws loose.” – Johan Cruyff

“I haven’t had fun on the pitch once under van Gaal. I had had more than enough of it.” – Franck Ribery

“Van Gaal is the Hitler of the Brazilian players, is arrogant, proud and has a problem. He has no idea of football. His type is sick, he’s crazy.” – Giovanni

“Van Gaal hurt me more than anyone else in football.”- Lucio, former Brazillian and Bayern Munich player

“Van Gaal is a dictator, with no sense of humour.” – Zlatan Ibrahimovic during his time with Ajax.