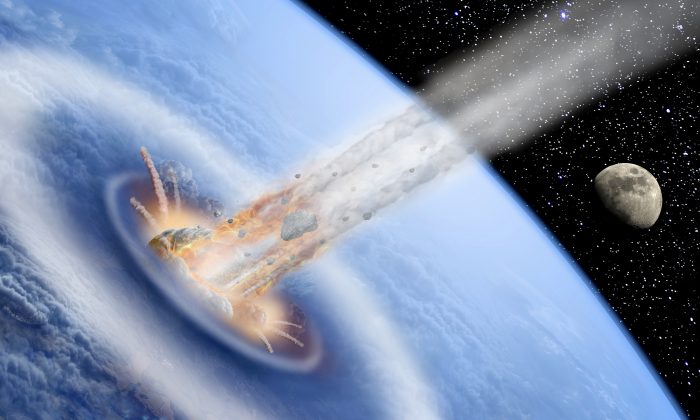 An asteroid that’s about the size of a football field flew past Earth on Feb. 19.

There isn’t any need to worry about the asteroid as it will pass by Earth at around 15 lunar distances away. That’s about 3 million miles from Earth.

NASA recently made note of a giant crater beneath Greenland’s ice that might be the result of a giant asteroid hitting the earth.

The crater is about 22 miles wide and buried under about a mile of ice. If it’s confirmed, the crater would be one of the largest impact sites on the planet.

He noted that the equipment would have to be taken about 100 miles inland across Greenland’s ice.

“That’s a technological challenge,” he stated.

It’s the second largest crater found in that part of Greenland in recent months. In November 2018, a 19-mile wide crater was discovered under Hiawatha Glacier, noted EarthSky.

“The only other circular structure that might approach this size would be a collapsed volcanic caldera. But the areas of known volcanic activity in Greenland are several hundred miles away,” MacGregor said, reported EarthSky.

NASA is particularly concerned about asteroids that are over 500 feet in diameter and closer than 4.6 million miles from Earth. These types of asteroids are classified as Potentially Hazardous Asteroids.

NASA have issued a statement about the giant asteroid. Here's what you need to know.

In February 2018, a newly discovered asteroid buzzed by Earth, and may have been as large as the asteroid that exploded over Russia five years ago.

“Asteroids of this size do not often approach this close to our planet—maybe only once or twice a year,” said Paul Chodas, the manager of NASA’s Center for Near-Earth Object Studies, at the time.

“Although 2018 CB is quite small, it might well be larger than the asteroid that entered the atmosphere over Chelyabinsk, Russia, almost exactly five years ago, in 2013,” added Chodas.