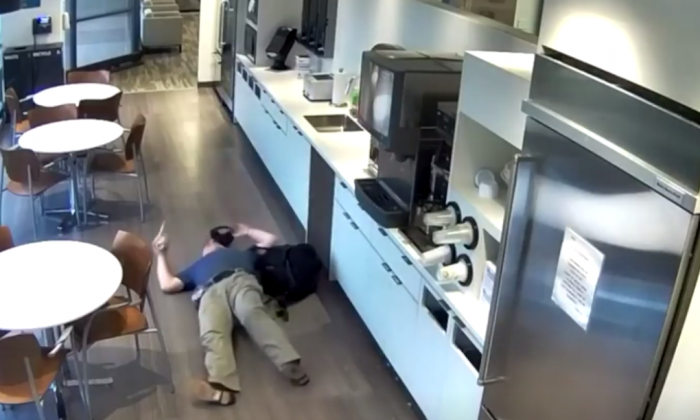 Alexander Goldinsky, 57, faked a fall and it was all caught on videotape. (Middlesex County Prosecutor's Office via Storyful)
Crime and Incidents

A man in New Jersey allegedly faked a slip and fall to try and claim insurance money, authorities said.

Alexander Goldinsky’s “fall” was caught on a surveillance camera, and he was charged with insurance fraud and theft by deception, prosecutors announced on Thursday.

The Middlesex County Prosecutor’s Office released the footage, where he tries to subtly throw a cup of ice on the floor in the cafeteria at his workplace. Goldinsky looks around, then blatantly pretends to fall on the floor.

Later, the 57-year-old went to a local hospital and was treated for his supposed injuries from the “fall.”

“The investigation revealed that Goldinsky purposely threw the ice on the floor in the cafeteria at his workplace, placed himself on the ground, and waited until he was discovered,” prosecutors said in a statement on Thursday.

He was subcontracted to a company in Woodbridge Township, New Jersey and works under the name All Gold Industries.

Officials said he filed a fake insurance claim for the ambulance service and the hospital treatment.

“Fraudulent claims cost everyone and we will aggressively prosecute those who illegally manipulate the system” said Middlesex County Prosecutor Andrew C. Carey.

He was released on a summons and is due to appear in court on Feb. 7. But Goldinsky denies the charges, according to CBS New York. He told the news station, “I didn’t do it, it was a mistake.”

In a more extreme case of insurance fraud in 2017, police said that a couple shot themselves in an elaborate scheme for insurance money.

The couple was hospitalized with gunshot wounds, but two weeks later, police arrested the couple for committing insurance fraud.

“Their story was that two guys entered the house. … But we were able to determine no one broke into their home,” Volusia County Mike Sheriff Chitwood said.

“If this incident just occurred and they called police right away, why would you have dried blood and why do we have bleach all over the house.”

Police said at the time that the “crime scene appeared staged.”