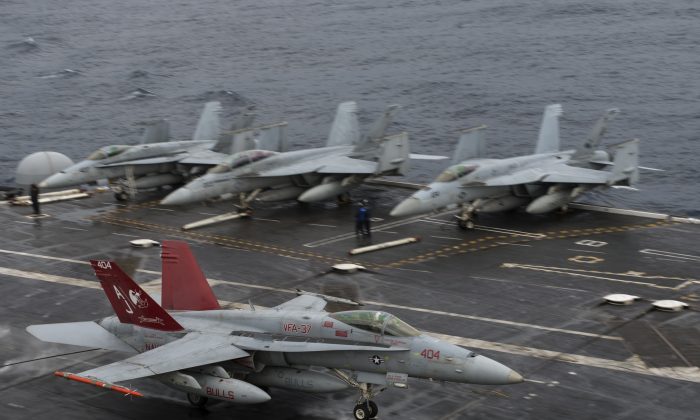 An F/A-18 Hornet lands on the deck of the USS George H.W. Bush aircraft carrier in the Atlantic ocean on Oct. 25, 2017. (Andrew Caballero-Reynolds/AFP/Getty Images)
US News

The 35 second clip was reportedly captured by an infrared camera aboard a F/A-18 fighter jet travelling at 25,000 feet in 2015.

“What the [expletive] is that thing?!” a pilot exclaims after the sensor locks-on to the fast moving object. “Look at that flying!”

The video was released online by To the Stars Academy of Arts and Sciences, a private scientific research company. While the organization did not state how it was obtained, it is apparently available to the public through a Freedom of Information request to the Department of Defense.

In December 2017, two similar videos were released to the public, amid the Pentagon’s acknowledgement of a $22 million program that investigated UFOs, funded from 2008 to 2012.

The pair of videos showed an encounter by U.S. Navy fighter jets with a white, oval shaped flying object off the coast of San Diego in 2004. One of the pilots involved in the incident, retired Commander David Fravor, told CNN that he saw what looked like a “40-foot-long Tic Tac” maneuvering rapidly and changing its direction.

In October 2017, fighter jets were dispatched to investigate a strange object caught by radar, and sighted by pilots, flying along a commercial route in broad daylight over Oregon. The fighter jets however found nothing.

Christopher Mellon, a former defense official in the George W. Bush and Clinton administrations and an adviser to the Stars Academy, wrote in a Washington Post op-ed that these videos “appear to provide evidence of the existence of aircraft far superior to anything possessed by the United States or its allies.”

“Defense Department officials who analyze the relevant intelligence confirm more than a dozen such incidents off the East Coast alone since 2015,” he wrote.

Yet not enough is being done by the government to investigate these encounters, Mellon contends in the piece.

“Reports from different services and agencies remain largely ignored and unevaluated inside their respective bureaucratic stovepipes. There is no Pentagon process for synthesizing all the observations the military is making,” he wrote.

“If the origin of these aircraft is a mystery, so is the paralysis of the U.S. government in the face of such evidence.”

Mellon observed that military departments and agencies have instead treated “such incidents as isolated events rather than as part of a pattern requiring serious attention and investigation.”

One of the problems hampering development was the stigma associated with conducting research in this field, Mellon observed.

“Nobody wants to be ‘the alien guy’ in the national security bureaucracy; nobody wants to be ridiculed or sidelined for drawing attention to the issue. This is true up and down the chain of command, and it is a serious and recurring impediment to progress,” he said.

“It is time to set aside taboos regarding ‘UFOs’ and instead listen to our pilots and radar operators.”

In October 2017, Luis Elizondo, the former head of the Pentagon intelligence program investigating UFOs resigned to protest what he described excessive secrecy surrounding the program, and internal opposition to it, the New York Times reported.

Mellon asked in his op-ed if the US has been “technologically leap-frogged by Russia or China?” Or might these released videos “be evidence of some alien civilization.”

“Unfortunately, we have no idea, because we aren’t even seeking answers.”