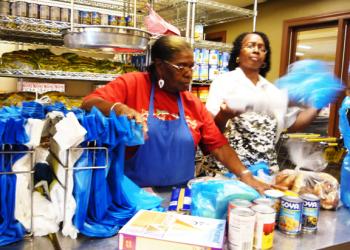 SHORTAGE: A food pantry on Manhattan's Upper West side runs low on food as recent months bring in more people in need of services. An expansion of the Federal government's food stamp program will take effect Oct. 1. (Christine Lin/Epoch Times)
US

“People who live below the poverty line suffer the hardest at a time like this,” Gotbaum said.

The new benefits increases the minimum standard deduction one to three member households receive by $10 in 2009, provides an average of nearly $500 a year in dependent deductions for households with children, and raises the $10 minimum benefit to $14 for one to two person households.

Gotbaum encourages immigrants with children who are U.S. Citizens to take advantage of their eligibility for food stamps. Nationally, non-citizens who are eligible for food stamps are 23 percent less likely to apply for them due to fears about their immigration status, language barriers, and the complicated application process, according to a 2008 Urban Justice Center report titled Nourishing NYC: Food Stamps Access in Immigrant Communities. 83,000 eligible non-citizens in New York City are not receiving food stamps, according to the report.

As Gotbaum and her team work to raise awareness about the program, soup kitchens and food pantries are having a hard time providing food for a growing stream of patrons.

At the food pantry inside the basement office of West Side Campaign Against Hunger, pantry manager Bill Healy looks at his partially stocked shelves.

“It's pretty sad,” said Healy, who has managed the pantry for seven years. He estimates that the pantry is stocked to 65 to 70 percent of its full capacity.

Inside the small basement pantry, women push small carts along the aisles, making their selections of canned green beans and cereal. Bins of fresh vegetables sit half-empty at the back.

The pantry on W. 86th St. has seen an patron increase of 30 to 40 percent in the last nine months, according to Healy—and the new faces aren't what he normally sees. “They are people in suits; some pretty well-dressed people,” he said. “I haven't seen that since 9/11.”

High gas prices have made food more expensive for everybody, including food pantries, which often have to buy their own food because the Food Bank has been experiencing shortages as fewer people are able to donate. It was completely out of rice for a month and a half.

“I have to buy canned vegetables from outside,” Healy said. He has had to buy chicken and beans from
discount grocery outlets as well. The price of rice, corn, and milk are almost twice what they were last year, according to Healy.

Moreover, partners that used to contribute thousands of dollars annually have dropped off due to economic pressures, Healy said. He recently lost one who donated $85,000 a year.