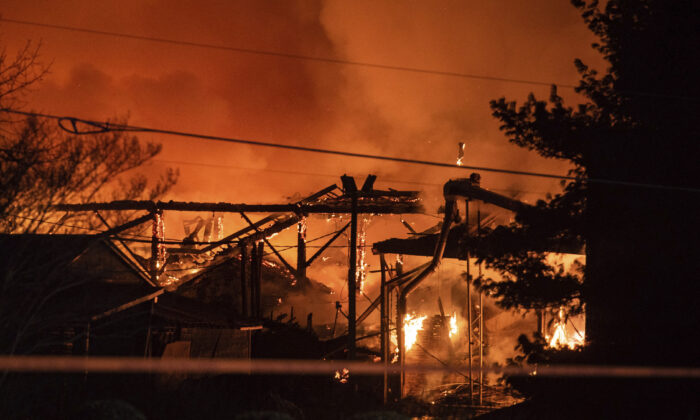 A structure fire burns at the Weaver Fertilizer Plant in Winston-Salem, N.C., on Jan. 31, 2022. (Allison Lee Isley/The Winston-Salem Journal via AP)
US

Wisconsin River Meats was just weeks from moving into a new addition to its building when a massive construction fire broke out on Feb. 3, destroying the old part of the facility.

Company owner David Mauer said the Mauston-based company “lost everything” related to production in the fire, and more than 20 people lost their jobs.

“We were building an addition to help accommodate demand from mostly local customers,” Mauer told The Epoch Times. “We were just weeks away from moving most of our production equipment to the new portion of the building.

“Insurance wasn’t the worst, but had equipment and building ‘caps.’ We lost $1 million in non-insurance-covered assets.”

The following day, the company had its meat processing license suspended by the Wisconsin Department of Agriculture’s Trade and Consumer Protection because of the fire, which meant it could no longer operate.

Mauer said the company cleaned up the facility, borrowed equipment from another meat processor, and “gathered what we could” to meet immediate needs.

Mauer said Wisconsin River Meats was able to get state approval to resume operations and was “slowly crawling back” from adversity.

“We are not ones to give up, and we are getting a little better every day,” he said.

He said the cause of the fire appeared to be construction-related when contractors were in the attic in an older portion of the business brazing copper lines. The work touched off cellulose insulation wire that set fire to the attic and spread throughout the old facility.

Mauer said the company had built a firewall because of a square footage code and this saved the new addition.

“Only part of the roof [in the new area] burned, and of course [there was] terrible soot and smoke damage.”

While Wisconsin River Meats slowly rebounds from the blaze, other food production and agriculture facilities are still reeling from fires—at least 17 in total—that have broken out across the country in the first half of 2022.

Oregon-based Shearer’s Foods laid off its entire workforce—about 230 people—after a fire ripped through the Hermiston plant in late February.

“After assessing the damage, it’s clear that the destruction is too great to rebuild and begin production in the near term,” Shearer’s Foods CEO Bill Nictakis said in a March 8 statement.

“Unfortunately, it would take at least 15 [to] 18 months before we could resume production,” Nictakis said. “We have not yet decided [on] the future of the Shearer’s Hermiston site. [It] has led to the very difficult decision to end employment for our team members.”

He said the company was “exploring opportunities to relocate team members interested in working in our other plants.”

The company also provided a severance and benefits continuation package to “recognize the effort and tenure that has [made] the site successful over the past years.”

Hermiston’s Chamber of Commerce Executive Director Val Hoxie said the company was a “pivotal” employer in the community.

“We have several companies that are pivotal. Shearer’s Foods was one of them,” Hoxie told The Epoch Times. “These people have had their lives changed in a major way.”

The community has stepped up to help employees affected by the fire.

“Our leaders have been working with organizations in the community to plan events that will benefit our employees, such as food drives, family activities, and job fairs,” Nictakis said. “We will continue to provide counseling services to those affected and do what we can to help them find other employment.”

“This was an unfortunate event, but thankfully there were no injuries. We have a strategic network across North America where this will not impact the availability of fresh foods from Taylor Farms,” Rachel Molatore, the company’s director of communications, told The Epoch Times. “No employees were laid off; we are already underway to rebuild the facility, and the investigation is still going on regarding the cause of the fire.”

On April 30, a soybean processing tank caught fire at a Purdue Farms plant in Chesapeake, Virginia. However, company officials said the facility would continue operating.

Since the Feb. 3 fire at Wisconsin River Meats, Mauer said the company has first-draft plans to rebuild nearly complete and is waiting on contractors. The company also rehired 12 employees.

He said the “biggest hurdles to recovery” are inflation, supply shortages, and labor costs. It also takes up to 12 weeks for meat processing equipment to arrive.

“New rebuilding costs and wait times are ridiculous, and interest rates are creeping up. But regardless, we plan to keep working for a better tomorrow,” Mauer said.