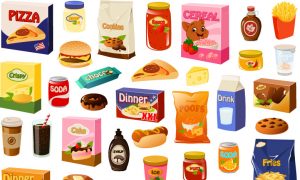 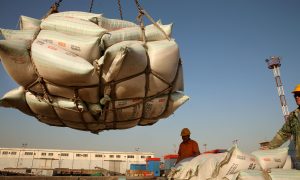 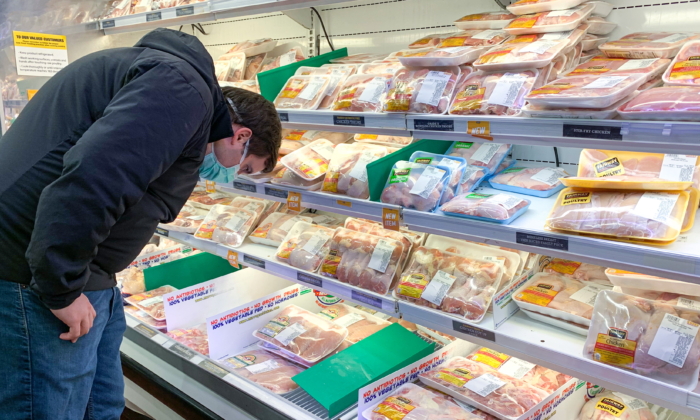 A shopper views meat products in a Fairway Market in Manhattan, N.Y., on April 27, 2020. (Chung I Ho/The Epoch Times)
US

Low-income Americans most at risk as meat, egg, and dairy prices soar
By Alan McDonnell
Print

Food prices across the United States have skyrocketed due to the effects of the CCP virus, as consumer stockpiling, panic buying, and supply chain difficulties have combined to produce the “largest monthly increase since February 1974,” according to a report from the U.S. Bureau of Labor Statistics (BLS).

Director of Food Policy at the Consumer Federation of America Thomas Gremillion told The Epoch Times that according to recent studies, more Americans than ever before are now forced to rely on food banks to feed their families. “This price rise will particularly affect low-income Americans, who were already struggling to put food on the table,” said Gremillion.

His sentiments were echoed by Nailah John, food safety and nutrition fellow at the National Consumers League. “The most affected are the impoverished and the 22 million unemployed Americans due to COVID-19,” she told The Epoch Times. “In addition, rising food prices make it difficult for households with little or no income to provide for themselves and their families.”

According to figures from the BLS, the food index increased by 1.5 percent in April, which followed a 0.3 percent rise in March. However, the grocery-based ‘food at home’ index increased by a substantial 2.6 percent, with each of the six major supermarket groups recording increases of at least 1.5 percent for April.

The price increases were not uniform, however, with massive increases for specific foodstuffs.

Indexes for both dairy products and fruit and vegetables also increased by a considerable 1.5 percent.

The price index for nonalcoholic beverages increased by 2.9 percent for April—which the BLS confirmed was its fourth consecutive increase. Prices for “food away from home” increased by a more modest 0.1 percent, which followed an increase of 0.2 percent in March.

Food at home prices up, gasoline and airfare prices down, over the year ended April 2020 https://t.co/i8IYtuzUGI #BLSdata pic.twitter.com/1jt9CRr5jp

John said food prices are likely to increase further. “This trend of increase in prices will continue due to the many new and rapidly changing factors during COVID-19, which can influence meat, poultry, eggs, dairy prices over the rest of the year,” she said.

“There is a greater demand for these products in grocery stores with many limiting the amount to two for each customer.” The worst of the increases may be over, however. “According to the USDA, there is an expected increase of between 0.5 to 1.5 percent for the rest of the year,” John said.

Gremillion said food price stability going forward will depend on a number of factors. The most important of these, he told The Epoch Times, is “whether large food processors can adapt their facilities and personnel practices to protect their workers from infection, which has led to the closure of plants across the country over the past two months.”

Gremillion also said food companies have to be more flexible in adjusting their operations away from restaurants and food service operators and to redirect more food to grocery stores.

I want to thank the patriotic and heroic meatpacking facility workers who are returning to work this week so the millions of Americans who depend on them for food security can continue to do so: https://t.co/oXHfBJTNlV

Gremillion said that exports have also impacted food prices in the United States, as some foreign customers have placed additional orders during the CCP virus crisis.

“As meat and poultry processing capacity has declined, exports of these products to China and other countries has soared. That has led at least one large processor to pledge to sell more of its product to domestic buyers.”

Both John and Gremillion believe that while the CCP virus crisis has brought hardship to America’s most vulnerable consumers, and especially low-income groups, it may have inadvertently exposed unanticipated consumption behaviors and weaknesses in our food provision systems that can now be remedied.

“Panic buying and stockpiling resulted in price gouging,” said John, “which impacted consumers and also limited supply in grocery stores, which [in turn] resulted in prices going up.” She also referenced meat and poultry plant closures as a factor in current price increases.

“Unfortunately,” said Gremillion, “this crisis has exposed some critical weaknesses in the food system. Meat and poultry processing in particular is far too concentrated.” He espoused the value of a resilient food-provision system in the United States, and said the path to this goal “should begin with rigorous anti-trust enforcement.”

Overall, the Consumer Price Index (CPI) for urban consumers fell by 0.8 percent in April—”the largest monthly decline since December 2008,” according to the BLS, a phenomenon closely linked to energy, transport, and retail restrictions in April.

“A 20.6 percent decline in the gasoline index was the largest contributor to the monthly decrease in the seasonally adjusted all items index, but the indexes for apparel, motor vehicle insurance, airline fares, and lodging away from home all fell sharply as well,” according to the statement from the BLS.

“The energy index declined mostly due to the decrease in the gasoline index, though some energy component indexes rose.

The index for all items less food and energy fell 0.4 percent in April, the largest monthly decline in the history of the series, which dates to 1957. Along with the indexes mentioned above, the indexes for used cars and trucks and recreation also declined. The indexes for rent, owners’ equivalent rent, medical care, and household furnishings and operations all increased in April,” according to the BLS.