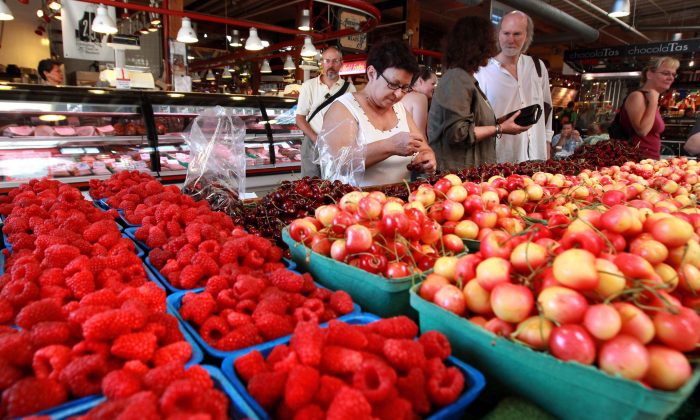 People shop at the Granville Island Public Market in Vancouver on July 26, 2010. A grading of Canada’s food system compared to 16 other OECD countries gives Canada a B-, with room for improvement in several areas. (The Canadian Press/Darryl Dyck)
Canada

A first-ever grading of Canada’s food system compared to 16 other OECD countries gives Canada a B- overall—not a bad score but one that leaves room for improvement, according to the Conference Board of Canada, which released the report this week.

“We have done very well. We are very lucky in terms of our endowments—resource endowments, water, and even farming,” said co-author Jean-Charles Le Vallée, senior research associate with the Conference Board’s Centre for Food.

However, although Canada performs well in many areas when measured against its peer countries, it could rank much higher if progress were made in several key areas, the report found.

“We are behind in representation of global food companies. We are behind in our livestock production. We are just not as strong as, say, the Netherlands,” said Le Vallée.

“We are an exporting country, but we don’t do as well as others. We rely more on our endowments rather than innovation.”

The Conference Board judged Canada’s food safety record to be its best sector, giving it a ranking of A, with improvements needed in the areas of traceability and disclosure of chemical risks to consumers.

Food security, which includes food availability, scored a B, although access to food is an issue Canada could improve. Canada also scored a B grade in the Healthy Foods and Diets category—despite high obesity levels—with lower-than-average intake levels of salt and saturated fats.

Although Canada performs well in many areas, it could rank much higher if progress were made in several key areas.

“We are with Australia at the household level. We have the highest level of food waste, over 100 kilograms, and that goes along the supply chain,” said Le Vallée. “Those are areas we need to focus on further.”

The report also noted the need for improvement in food innovation, an increase in the number of farm animals, and better regulation of food products.

The National Farmers Union was critical of the report’s findings, saying they concentrated too much on larger-scale production rather than smaller farms. Union president Jan Slomp said he worries that if some of the improvements proposed are applied it would alter the farming business too much and be against the “public good.”

“We also have a dangerous level of the average age of farmers—high debt levels and high age. Instead of the report being more glowing, we should ask ourselves: Who is going to farm?”

According to Statistics Canada, the agricultural sector has been undergoing major changes, with the number of smaller farms shrinking over the last two decades. In 1991, there were 280,043 farms in Canada, but by 2011 the figure was 205,730. Farm size increased from an average of 598 acres to 778 acres. During the same period, the number of farm operators declined by 96,950, or 24.8 percent, with the majority of farmers now above the age of 47.

“They are absolutely right when they speak for food processors that look to Canada and its capacity to produce food for the world, but the human component, the public component, and the farmer component are completely lacking,” said Slomp.

“Only when there is prosperity for farmers can you become a stronger player in the international market. Otherwise, it becomes a financial institution that invests in land and is hiring a manager on an enormous scale and is hiring the cheapest possible labour.”