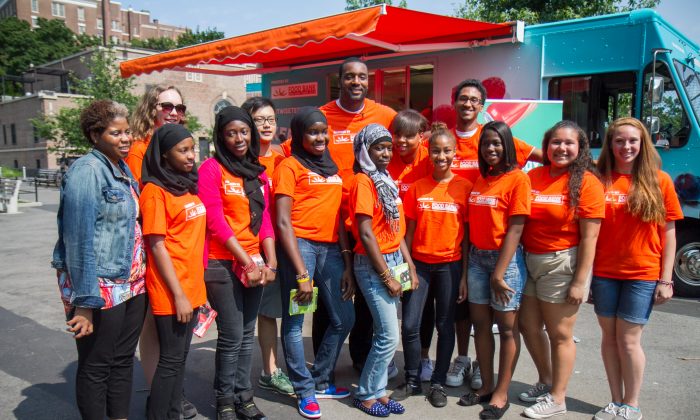 NFL football player, Chris Canty (C), appears with administrators and teens from the Food Bank For New York City’s EATWISE program, at Mullaly Park in the Bronx, on Monday, July 21, 2014. Canty, who plays with the Baltimore Ravens, was promoting the organization’s latest campaign to encourage young teens to eat healthy, “Change One Thing”—replacing one unhealthy item in their diet. (Annie Wu/Epoch Times)
New York

NEW YORK—More than three million New Yorkers live in neighborhoods that lack access to healthy food, according to a 2008 study conducted by the city.

In the Bronx in particular, no community district met the city’s standard ratio of local grocery stores to number of residents. The study found that the communities with the lowest access to healthy food had the highest rates of diet-related diseases.

“Most in my family are diabetic. I wanted to stop that,” said Albert Garcia, 18, a Bronx resident who is now part of the Food Bank for New York City’s EATWISE program. The social services organization created the program so that teens from around the city can teach their peers about eating healthy.

Throughout the summer and the school year, teens are trained to give lessons on nutrition to students in city schools and summer camps. They receive a stipend for their work.

Bronx neighborhoods have the city’s highest rates of diabetes among its residents—16.9 percent of those aged 18 and over in the Hunts Point-Mott Haven neighborhood have diabetes, according to data from the city’s health department.

Now instead of eating candy once a day, Garcia eats fruits at least two to three times a day. He’s convinced his friends to change too. “All my friends are basketball players. They need to keep their diets healthy,” he said.

This summer from July to September, the Food Bank is also traveling through the five boroughs with their “Change One Thing” truck, where teens in their program will give out snacks like dried fruit and popcorn—in an attempt to get New Yorkers started on a healthy lifestyle by replacing one unhealthy food item in their diet.

On Monday, the teens were stationed at Mullaly Park in the Bronx, where Bronx native and NFL football player Chris Canty also appeared to promote their campaign.

Affordability is a key challenge to people getting the healthy food they need, said Dominique Jones, chief programs officer for the Food Bank for New York City. “But at the end of the day, it’s about the knowledge, of knowing how to prepare healthy meals,” he said. The Food Bank offers workshops in over 200 schools to teach parents and young children how to cook healthy meals under a limited budget.

Along with a growing social awareness of the co-relation between a healthy diet and good health, food banks have made a special effort to provide healthy food and educate people on nutrition, said Christa Hall, assistant manager of Healthy Neighborhoods, a program under City Harvest, the food rescue organization. They also provide free classes on nutrition to people of all ages.

In low-income communities, part of the challenge is finding the healthy food. “It’s not that healthy food doesn’t exist. It’s just hard to get to. It may be 10 blocks from where you live, and if you have children, it’s not easy to get to,” said Hall. City Harvest opened fresh produce markets in five neighborhoods in the city that they identified as having high population density, high rates of diet-related diseases, and are low-income: the North Shore of Staten Island, northwest Queens, Bedford-Stuyvesant, Brooklyn, the south Bronx, and Washington Heights/Inwood. Residents can get the produce for free at their twice-a-month markets.

The city health department also piloted a program to help alleviate the disparity in access to healthy food, called Health Bucks. In over 135 farmers’ markets in the city, Supplemental Nutrition Assistance Program (SNAP) recipients get a $2 reward for every $5 spent at farmer’s markets. Laura McDonald, a spokesperson for Greenmarket, has observed that families in low-income neighborhoods are spending large amounts of their monthly Electronic Benefit Transfer (EBT) allowance on fresh fruit and vegetables. This scheme directly benefits farmers at these markets, with some reporting that EBT sales comprise 50 percent of their total income.

“Greenmarket also contributes to local pantries, with farmers donating food that hasn’t been sold by the end of the working day to local charities and shelters,” McDonald said.

Correction: An earlier version of this article misquoted Christa Hall. What she actually said is, “It may be 10 blocks from where you live, and if you have children, it’s not easy to get to.” Epoch Times regrets the error.