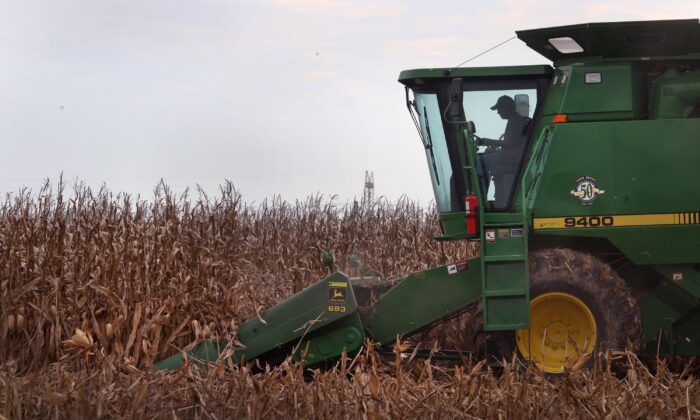 Americans need to reach deeper into their wallets at the grocery checkout, but there’s no indication the shelves will be barren, according to farmer survey data that tracks production.

Food prices were up more than 10 percent year-over-year in June, with flour jumping almost 20 percent. Farmers have been hit with a conflation of adversities, including doubling prices of diesel and fertilizers as well as herbicide shortages. This prompted concerns over a possible food crisis, especially if farmers were to get a bad crop this year.

So far it seems those fears may not materialize. While some parts of the country have been affected by droughts, overall, the harvest is still looking to be fairly good this year, according to the July grain report by the Department of Agriculture (USDA) (pdf).

The United States is a major grain exporter, especially wheat, corn, and soy. As such, it would take a particularly extreme calamity to push the country into food shortage. Even though the conditions were particularly difficult this year, it appears farmers have been able to push through.

In fact, grain prices have started to decline a bit in recent weeks, though that may have more to do with expectations of an economic downturn, which could tighten demand.

Meanwhile, meat, eggs, and milk production have been holding up as well, though farmers are expected to collect about 3 percent fewer eggs this year, likely due to the avian flu outbreak that forced them to kill about 2 million laying hens earlier this year.

Price-wise, however, milk is up 13.5 percent, eggs some 33 percent, and chicken meat about 18 percent. Pork and beef are only up 4 and 10 percent respectively from a year ago, but measured against 2019, both hiked by over 25 percent.

The hikes are partly due to higher input prices, such as those of animal feed, and partly due to strong demand both at home and abroad propped up by massive government spending during the COVID-19 pandemic.

The Ukraine war has disrupted grain exports from the country, particularly wheat. That also pushed global grain prices up. Ukraine is stuck with about 20 million tons of grain slated for export, Ukrainian media reported. By comparison, the world consumes about 770 million tons of wheat a year and keeps a stock of about 270 million tons, according to the USDA report.