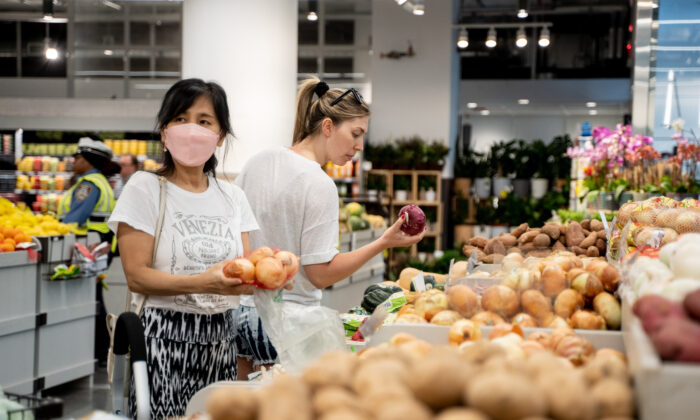 Food prices in the United States shot up in May at their fastest annual pace in 42 years, according to new government data, with some food producers warning American households to brace for more inflationary pain ahead, as some input costs have yet to be reflected in grocery store prices.

The food component of the personal consumption expenditures (PCE) price index, released on June 30 by the Commerce Department (pdf), showed food prices vaulting at an annual 11 percent in May, the highest reading since 1980.

A number of U.S. farmers interviewed by The Epoch Times have said that soaring fuel and fertilizer costs have yet to fully make their way down the food production chain.

“Usually, what we see on the farm, the consumer doesn’t see for another 18 months,” said John Chester, a Tennessee farmer of corn, wheat, and soybeans.

The grim forecasts come as the American Farm Bureau Federation said in a recent report that American consumers can expect to pay 17 percent more to eat this coming July 4 compared to Independence Day last year.

Meanwhile, the so-called core PCE price index, which excludes the volatile categories of food and energy and is the Federal Reserve’s preferred gauge for measuring inflation, rose by 4.7 percent in the year through May, Commerce Department data show.

While that’s a slight decline from the prior month’s 4.9 percent pace of growth and roughly in line with analysts’ estimates, it’s more than double the 2 percent inflation target that the U.S. central bank aims for when it sets monetary policy, chiefly interest rates.

And while the over-the-year core PCE inflation gauge inched down, the month-over-month reading remained flat at 0.3 percent in May for the fourth month in a row, suggesting that inflationary pressures remain stuck in high gear, and the Fed’s fight to lower price growth will be protracted.

“Inflation appears to be cooling, but it may be a mirage, as sequential momentum remains strong,” Gregory Daco, chief economist at EY-Parthenon, wrote on Twitter, referring to the elevated monthly inflation readings.

The Fed has pivoted in its view on inflation, initially considering it a temporary spike that would soon pass but now describing it as persistent and problematic.

The central bank has embarked on an aggressive rate-hiking cycle in a bid to tame runaway prices, with some analysts seeing a growing risk that the U.S. economy will tip into recession.