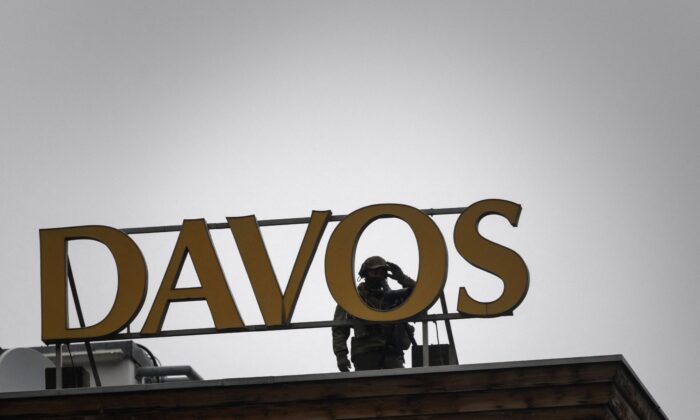 A special police officer is seen on the roof of the Congress hotel during a session at the World Economic Forum (WEF) annual meeting in Davos on May 24, 2022. (Fabrice Coffrini/AFP via Getty Images)
Thinking About China

Food, Fuel, and Inflation Crises All Stem From Globalist Policies

The global elites left Davos last week after grappling with solutions to the profound crises facing the world. They left as they arrived, unaware that the crises are entirely of their own making.

Take energy, where shortages have led to the highest gasoline prices in the U.S. and UK history and to fuel poverty affecting millions of people. If not for the specter of climate change—for decades one of the globalists’ central preoccupations—the world’s energy situation would be radically different.

Canada’s tar sands wouldn’t have been demonized and the country would have built the Keystone XL Pipeline and other pipelines to transport ever greater quantities of energy across the continent and beyond.

Liquefied natural gas facilities on the Atlantic and Pacific coasts of Asia, the Americas, and Europe would have been built to ship and receive plentiful natural gas.

In the same way that the United States quickly became the world’s largest oil and gas exporter once the Trump administration scaled back crippling climate-related regulation, Europe would have been awash in energy had bans on fracking and offshore fossil-fuel development been lifted to allow development of its immense oil and gas reserves. Instead of fuel poverty, Europe would be experiencing fuel plenty.

The globalists pushing climate change policies tell us there is no choice if the planet is to be saved from catastrophe many decades if not centuries from now. What they don’t tell us is that their prophecies of doom are based on computer climate models, all of which have proven false to date.

Not a single claim—whether that the Arctic ice caps would melt or polar bear populations would decline or tornadoes would increase—have materialized. Reasonable people can dispute whether the prophecies of doom will materialize in the future. Reasonable people cannot dispute that the globalists’ past decisions to override the free market have created today’s energy crisis.

Despite the globalists’ climate change policies, carbon dioxide in the atmosphere—now at 400 parts per million—have reached record levels. This has been a boon for the planet because CO2—also known as nature’s fertilizer—has produced a bounty of bumper crops. Australia reports record wheat, barley, and canola crops and near-record sorghum crop. India, the world’s second-largest producer of wheat, expects record exports this year. Brazil expects record corn. Russia, with another record crop, will be the world’s largest wheat exporter.

Nevertheless, starvation is on the increase. The United Nations warns that we’re in the midst of a “global food crisis” in which “44 million people in 38 countries are at emergency levels of hunger.” Here, too, the responsibility rests with globalist policies that make food unaffordable.

A dominant contributor to the famine is the supply chain disruptions caused by the globalists’ decision to abandon traditional responses to pandemics in favor of an experimental lockdown of much of the world’s economy. The chaos and costs from this decision by governments to apply their COVID-19 lockdown theory upended the world’s food distribution systems and soared the cost of food. The inflation created when governments printed money to support industries and individuals sidelined during the lockdowns then made food prices even more prohibitive.

Exacerbating the supply chain disruptions was the globalists’ decision to perpetuate the Russia-Ukraine war by providing Ukraine with billions in armaments, a departure from the past norm of pressuring combatants to resolve their differences through negotiations. As a result, agricultural production in Ukraine, once known as the breadbasket of Europe, collapsed, with wheat production falling by 44 percent and corn by 39 percent.

Reasonable people can dispute whether Western governments were wise to implement and fund the lockdowns, or to perpetuate the Russia-Ukraine war, but they cannot dispute that their actions spurred the increase in famine that the world is experiencing today.

The globalists may believe that the world needs their new world order. But they also exemplify the adage that the road to hell is paved with good intentions.