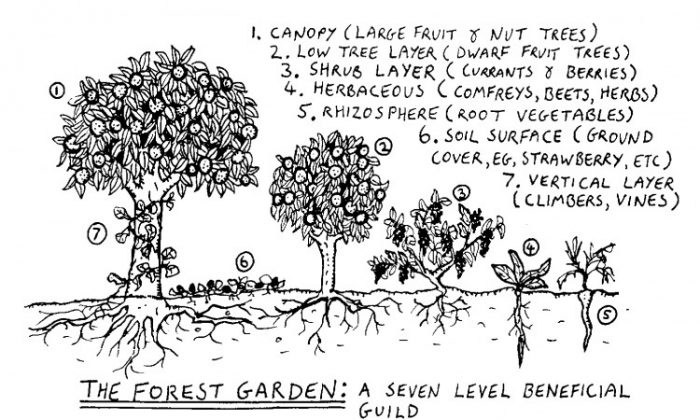 Seattle will soon be home to the nation’s largest urban food forest. Planted on a seven-acre plot of land in the city’s Beacon Hill neighborhood, the site will not only provide locally grown food to the area, but is viewed by those involved as a path to increased community cooperation and friendship.

“There is a goodwill movement to grow organic food in public spaces for the health of the people and other species that are beneficial to our food chain,” said co-founder Glenn Herlihy, in an email statement. “This goodwill builds a stronger more resilient community, regenerates habitat on public lands and elevates many pressures on the environment with locally grown food.”

A food forest, or edible garden, is a manufactured forest that’s designed to mimic a woodland ecosystem, but with different varieties of edible trees, bushes, and flowers substituted.

The Beacon Food Forest will include hundreds of kinds of edible plants including walnut and chestnut trees, blueberry and raspberry bushes, apple and pear trees, pineapple, guava, persimmons, honeyberries, a variety of citrus, and various herbs, among others.

Fruit and nut trees will be grown on the upper level canopy, while below will be berry shrubs, edible perennials, and annuals.

Most of what is to be planted in Seattle’s food forest will grow perennially, meaning that the plants will live for more than two years. Thus, the vegetation will, over time, become a large orchard capable of sustaining itself year after year.

The food forest is specifically designed so that the layers of plants and the insects they attract benefit each other, to increase crop production and provide a resilient community.

The organizers see a comparison between the plant diversity and relationships in the forest and human diversity and cooperation in planting and maintaining it.

The modern ecological system known as permaculture, where a designed ecosystem is managed for diversity and sustainability, is based on the ancient concept of food forests. Permaculture promotes the sustainable relationships between plants and animals that are inherently found in natural forests or in other natural ecosystems.

Permaculture expert and a designer of the Beacon Food Forest, Jenny Pell, discussed the idea of food forests in an interview with the independent media program Living on Earth. “Permaculture, it’s an ethical framework with a lot of principles that give us a design methodology, really trying to get to sustainable, resilient human communities,” Pell said.

Creating relationships to form an ecosystem that is able to produce high yields of food with less maintenance requires putting plants together that are mutually beneficial. Many plants are even included only for their ability to attract insects for promoting a system of natural pest management.

“We’re really good at picking things that are going to play well together,” said Pell. “And when we step back, those things are going to grow in their own relationships–nature kind of takes over at that point.”

Designers hope to finish the first phase–a 1.75-acre test zone to be planted by the end of the year–and in the years to come they hope to convert the remaining acreage to fruit trees, according to Beacon Food Forest project committee member Glenn Herlihy on npr.org’s The Salt.

Eventually being able to offer small plots for gardeners at around $10 a year is also in the plans, says Herlihy.

Seattle is not the first city to grow an edible forest. In Portland, Ore., a 2,600-square foot garden is now in its fifth season. In 2010, Atlanta expanded its botanical garden to include a one-acre edible garden.

Since 2007, Philadelphia has become home to 22 free to low-cost food forests that have sprouted up all over the city. Another Pennsylvania city, Pittsburgh, is preparing to grow its orchards in vacant parking lots. Other efforts to establish edible gardens as part of a free health clinic are nearing completion in Syracuse, N.Y.

In central Portugal, a nearly 20-acre forest garden system has been in cultivation since 2008.

For 28 generations, a single family in Vietnam has maintained a two-acre 300-year-old food forest.

For thousands of years, forest gardens have existed in Central and South America. To this day many food forests can still be found scattered throughout the Maya and Amazon rain forests.

A 2,000-year-old food forest oasis in southern Morocco is maintained by over 800 people and still growing strong.

“But it’s been continually managed over time for 2,000 years,” says Pell. “So, I think what’s captured people’s imaginations so much about this project worldwide is that it’s so solutions oriented. And it’s so accessible.”

Though Seattle’s food forest is being grown to serve the local community, wherever edible gardens sprout up, the Beacon Hill developers hope that the motivation for growing food forests continues to spread far and wide.

“The reaction from the community, the country and many global regions has been very positive,” Herlihy stated. “We encourage all people to join a local food growing project and empower their community with healthy living.”

For now, the Beacon Food Forest is the only one of its size in the northwest, and in the country. “I’m going to call it one of the living genetic banks of really valuable material in the Pacific Northwest,” says Pell.

The ancient method of forest gardening is still in use today, and the Beacon Food Forest is one of its most modern demonstrations.