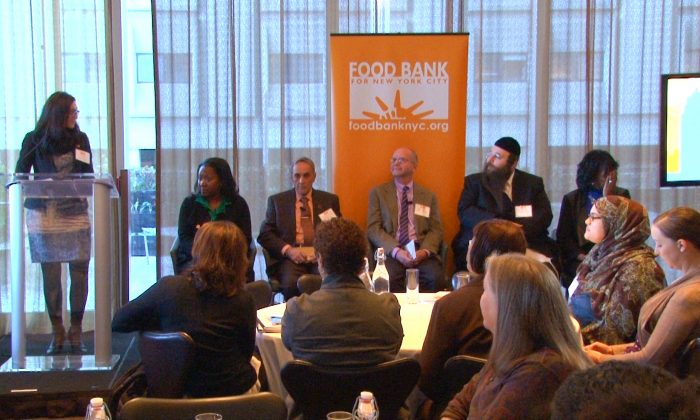 NEW YORK—In a swanky lower East Side restaurant Monday, policymakers, philanthropists, and food charities offered suggestions for Mayor-elect Bill de Blasio to make good on the promise to end the “Tale of Two Cities” by cutting down on hunger and poverty.

The event comes on the heels of a Nov. 1 cut to food stamp benefits from the federal government. Some 1.9 million New York City residents receive food stamps. Lines for food pantries and soup kitchens have become increasingly long, advocates say.

With both Hanukkah and Thanksgiving approaching, the Food Bank for New York City is making sure the issue is not left out of the transition discussion for the new mayor.

“Our sincere hope is that the upcoming mayor will in fact embrace the plan we’ve submitted,” said Margarette Purvis, president of Food Bank for New York City. “We were very proud of the fact that he ran speaking so much about closing the gap.”

Food Bank for New York City, the largest hunger relief organization in the city, created a five-point plan for Bill de Blasio’s administration on how to cut down on hunger.

The group’s top suggestion is that the new administration should work with state and federal lawmakers to expand food stamp benefits and make it easier to apply and re-apply for the program. Food Bank also suggests expanding access to school and summer meals, pointing to a 2012 survey that found that 34 percent of households receiving food stamps had children.

The group also urged the mayor-elect to increase funding to emergency food providers, like food pantries and soup kitchens, to $19.8 million in 2015. The current budget is $11.7 million, which Food Bank said is not adjusted for inflation or the increase in poverty in New York City.