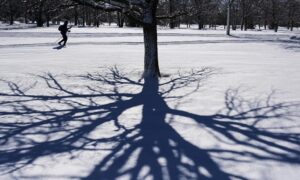 OTTAWA—Former federal cabinet minister and London, Ont., mayor Joe Fontana has been named recipient of an award he may not want to accept.

Fontana is the winner of the 2015 federal Teddy Waste Award, a dubious honour bestowed on individuals and governments each year by the Canadian Taxpayers Federation.

The former Liberal MP was convicted last June of breach of trust, fraud and uttering forged documents after a contract was altered for his son’s 2005 wedding and Fontana submitted the $1,700 invoice to the House of Commons for reimbursement, claiming it was for a function with the federal finance minister.

And the most outrageous part, said Wudrick, is that, despite being convicted of fraud, Fontana continues to collect his pension.

Ontario’s Ministry of Energy got the nod for the provincial Teddy for spending $1 billion to install 4.8 million so-called smart meters in homes in a program that has been beset with troubles.

The province’s auditor general has found cost overruns that could double the initial price. Hundreds of thousands of the electronically monitored power-consumption meters have been unable to transmit data. Several dozen have caught fire.

And the federation gave its Lifetime Achievement Award to Vancouver’s TransLink, for more than a decade of waste and tax hikes.

The Teddy is named after Ted Weatherill, a former federal bureaucrat who was fired in 1999 for submitting lavish expense claims, including a $700 lunch for two.

Wudrick acknowledged Wednesday that government waste in Canada appears to be endless and it’s doubtful that the federation’s annual award have stopped much, if any, of it from happening.

But shining a spotlight on waste keeps politicians and bureaucrats on their toes, he said.

“We’re tough on all government waste, but sometimes the best way to strike a nerve is to tell some of the most absurd stories,” said Wudrick.

“Sadly, the capacity for government to dream up new ways to waste money seems infinite.”

Other nominees included Public Works and Government Services Canada for spending $65,000 to repurchase a bulldozer it had confiscated and sold for just over $5,500, rather than destroying it as originally ordered by a court. Eventually, the bulldozer was destroyed anyway.

Former Alberta Premier Alison Redford was also cited for the remodelling of a penthouse apartment. Just the plans for the alterations, which included an $832,000 Zamboni storage shed and skating rink that was never built, cost the province’s taxpayers $173,000.