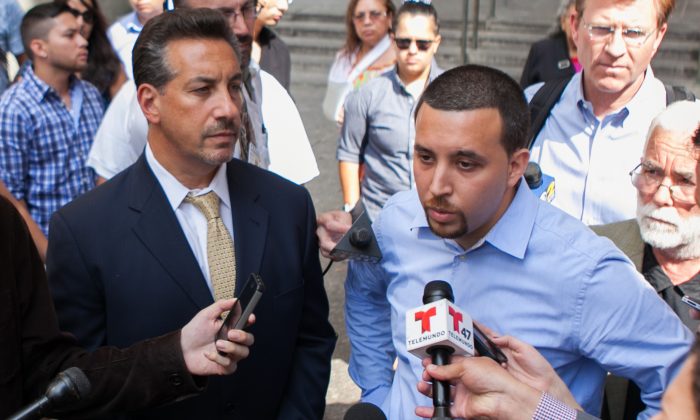 Alan Russo stands with his lawyer (L) as he talks to media about the trail of Franklin Reyes, 17, who killed his daughter Ariel, last year in a SUV while fleeing police, in Manhattan on July 30, 2014. (Benjamin Chasteen/Epoch Times)
Crime and Incidents

NEW YORK—The teen driver charged with killing a 4-year old girl on an Upper West Side sidewalk last June could have his offer to be tried as a juvenile revoked in light of recent allegations of petite larcency, says Manhattan Supreme Court Justice Gregory Carro.

Franklin Reyes, 18, was still a minor when he hit Ariel Russo and her grandmother on the morning of June 4, 2013. Reyes’ lawyer has fought to have Reyes tried as a “youthful offender,” for which he would receive a sentence of between 16 months and 4 years and have his records eventually sealed.

“He’s youthful, he’s qualified for it,” said Reyes’ lawyer Martin Schmukler, when asked why Reyes should be tried as a minor.

If Reyes were tried as an adult, he could receive a sentence between 5 and 15 years.

Last week, justice Carro said he was inclined to offer Reyes juvenile status if he pled guilty. On Wednesday, Carro suspended his offer in light of the district attorney’s new charges of theft against Reyes’ and his father, who were arrested on July 17.

Assistant district attorney Vera Varshavsky said that there was a witness who had seen Reyes and his father coming out of an apartment with a Nikon camera they didn’t have going in, enough evidence of Reyes’ guilt and a reason to deny him the juvenile plea bargain.

Reyes’ father works as a super at the apartment, and was asked to fix a leak in the residence of a tenant who had recently died. Varshavsky said the deceased tenant’s executor had included that camera in an inventory.

The grand jury’s decision on whether or not to indict Reyes is expected to be made in the following week, which will influence the judge’s decision to given Reyes the juvenile status plea bargain.

“I’ll wait to see what the grand jury says,” the judge said.

Varshavsky had previously produced evidence of Reyes bragging about speeding on his Facebook as reason to deny him status as a juvenile.

“I want him to pay for what he did,” said Ariel’s father Alan Russo, after Wednesday’s proceedings. “He shouldn’t get [the juvenile status plea bargain].”

The Russos had previously pursued a $40 million negligence lawsuit against the city for a 911 operator’s mistakes that may have resulted in a 4-minute delay to the scene of the crash.

“They want to make sure that the youth understand if they commit a crime that results in a serious injury, there are serious consequences,” said the Russos’ family lawyer Scott Rynecki, who specialized in personal injury lawsuits.