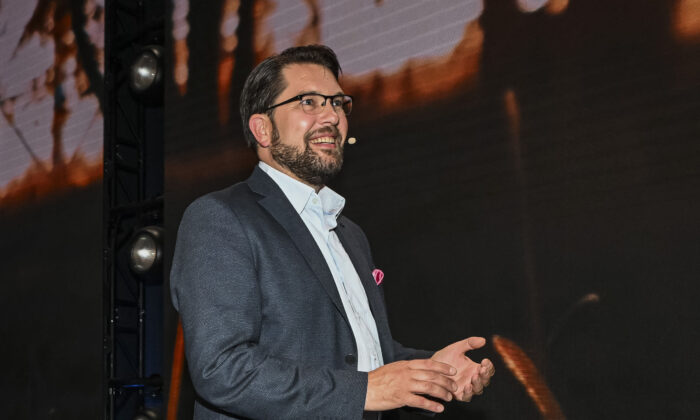 The leader of the Sweden Democrats Jimmie Akesson arrives at the party's election watch in Nacka, near Stockholm late Sunday evening on September 11, 2022. (JONATHAN NACKSTRAND/AFP via Getty Images)
Europe

GOTHENBURG—Sweden’s national politics saw a shake-up this week as right-wing parties, including the Sweden Democrats headed by Jimmie Åkesson, won a majority of parliamentary seats.

On election night Sunday, the result was too close to call, but indicated a single-seat majority for the right-wing bloc, 175–174. After almost all votes had been counted on Wednesday, the lead had increased to 176–173, and the incumbent Social Democrat Prime Minister conceded defeat and resigned on Thursday.

The likely new prime minister is Ulf Kristersson of the Moderate Party. On election night he thanked everyone who had voted for them “hoping for change” and spoke of the need to unite the nation.

“I approach this task with great humility, but I’m ready to do everything in my power to form a new, stable, and effective government for the whole of Sweden and all citizens,” he said.

The parliamentary situation is still far from clear, as the victorious right-wing bloc is unlikely to form a cabinet that includes all four parties. A coalition government is in fact most likely not to include the bloc’s biggest party, the Sweden Democrats, who overtook the Moderate party as the second biggest party overall, behind the Social Democrats. The other three parties in the bloc have said that they will not accept ministerial positions for the Sweden Democrats.

Åkesson said on election night that his party’s ambition was to “form the basis” of the new cabinet, but in reality, the Sweden Democrats, according to most commentators, are likely to content themselves with collaboration in the Riksdag, where they will be able to make extensive legislative demands on the minority government while retaining an outsider position.

Paradoxically, the Social Democrats improved their result over the 2018 election, and all the right-wing parties except the Sweden Democrats lost seats. The deciding factor was instead the small Liberal party’s decision earlier this year to support the Kristersson bloc, after almost being wiped out in the polls and replacing their party leader. In 2018, the Liberal party backed the Social Democrat-Green Party government.

Going forward, the Liberal party is expected to become the main stumbling block for a Kristersson government. Several Liberal MPs have not really accepted the new party line of collaboration with a nationalist, explicitly non-liberal party they regard as anathema. In any given parliamentary vote, only two would need to break party discipline, which, although rare in Sweden, is in no way unheard of. Whether or not to try to reduce the risk of this happening by bringing the Liberal party into his cabinet is a choice Kristersson would have to make—and then get this past the Sweden Democrats.

On the losing side, the increasingly left-leaning Center party lost ground, leading to the resignation of long-time party leader Annie Lööf. Some speculate that the exit of Lööf, a staunch opponent of the Sweden Democrats, might lead to a re-orientation for the party, which was part of the successful right-wing alliance that led Sweden between 2006 and 2014.

This election will also likely go down in history as the first strong showing of an explicitly Muslim party, Nyans (“Nuance”), which failed to enter the Riksdag but seem likely to win seats in one or more municipalities. Nyans has been accused of close connections to the Muslim Brotherhood, and wants to ban the burning of the Quran and drawings of the prophet Mohammad.

The election campaign has been tough and embittered, and many political and media figures have expressed disbelief at the expected influence of the Sweden Democrats. Accusations of “fascism” and rhetoric of “resistance” similar to that of the American left following Donald Trump’s presidential victory in 2016 abound in social media and commentaries.

Magdalena Anderssons drew criticism for her resignation speech, during which she said that the Social Democrats will “call out any attempts to foment or excuse hate, threats, violence and racism,” which was seen as clearly directed at the Sweden Democrats.

None have been very specific about what in the Sweden Democrat’s policies constitute “fascism,” typically pointing to their more hardline views as a small fringe party 30 years ago, with ties to neo-nazi movements. The Sweden Democrats today have a professed zero-tolerance policy against racism, promote an “open Swedishness” that includes immigrants who want to assimilate, and their support among immigrants has grown.

Ulf Kristersson, if he is elected Prime Minister, will have to, among other things, complete Sweden’s NATO membership process, get to grips with the rampant gun violence in the country, and navigate Sweden through the ongoing European energy crisis.