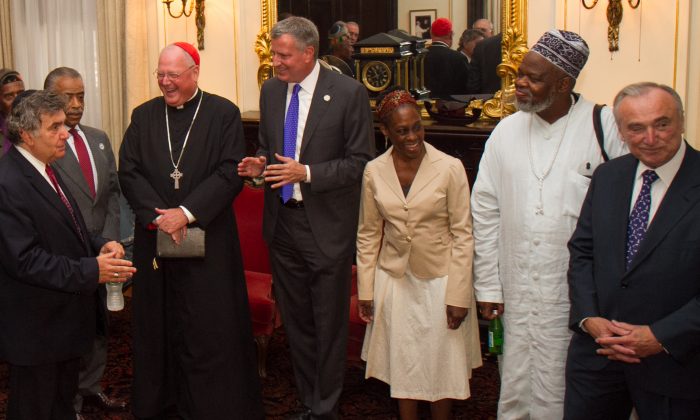 NEW YORK—Mayor Bill de Blasio met with a dozen local Christian, Muslim, and Jewish faith leaders Wednesday to discuss how to ease tensions and build better relations between police and communities, in light of the death of Eric Garner, who died after a police officer placed him in a chokehold.

The mayor’s wife, Chirlane McCray, Police Commissioner William Bratton, and the NYPD Chief of Department Philip Banks were also in attendance at the meeting, which was closed to the press. De Blasio asked Cardinal Timothy Dolan to convene the roundtable earlier this month.

At a press conference after the meeting, de Blasio said the police’s mission was to “protect and respect.”

Because New Yorkers often turn to their clergy for advice, he hopes to enlist the different faith leaders to serve as conduits between their congregation and the police.

During the two-hour meeting, the faith leaders said they considered regularly inviting the police and other public servants to houses of worship, and also convening among themselves to discuss police–community relations.

Both the mayor and Bratton said they were not concerned about violence or disorder erupting at a march coming up Saturday on Staten Island to protest Eric Garner’s death—unlike protests in Ferguson, Mo., where police and residents have clashed for more than a week, after an unarmed teenager, Michael Brown, was shot and killed by a police officer.

Bratton said he expects the march to be “self-policing.”

Though the Rev. Al Sharpton had previously been critical of the police department in the wake of Eric Garner’s death, Sharpton softened his tone Wednesday, thanking Bratton for being involved in the discussion. “We don’t have to all agree on things, but we don’t have to be disagreeable,” he said.