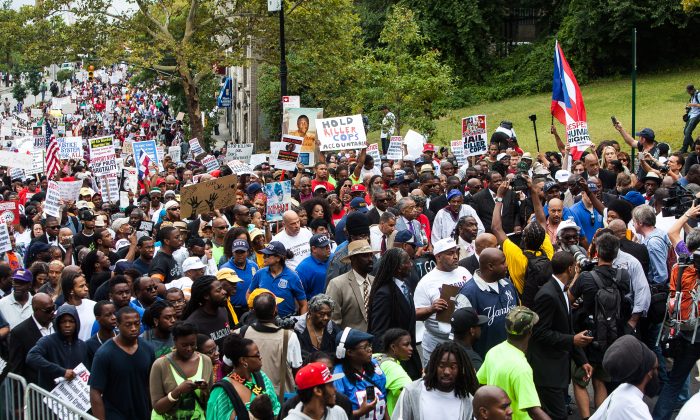 A march on Staten Island, Aug. 23, 2014, for Eric Garner, a man killed July 17 when a policeman put him in a chokehold, and against police brutality. (Petr Svab/Epoch Times)
New York

Garner, a black man from Staten Island, died last month after a police officer put him in a chokehold while arresting him for allegedly selling loose cigarettes.

People at the march continually chanted, “No justice, no peace, no racist police” and “don’t shoot, I’m black.”

Protestors in New York have connected Garner’s death to a culture of racial profiling and police brutality that they say disproportionally affects people of color, which is similar to sentiments in Ferguson, Mo., where protests erupted two weeks ago after an unarmed black teenager, Michael Brown was shot and killed by a police officer.

“It’s clear based on the numbers of killings that have happened across the country of unarmed black and brown men, that we have a clear problem in the U.S. with the way that we value men of color and their lives,” said Rachel Gregory, 24, a march participant.

Greginald Spencer, 30, who is involved with Rev. Al Sharpton’s National Action Network, said police once profiled him after he left a barbershop with a t-shirt and gym shorts on. A police car slowed down to watch him.

“I’m not saying all cops are bad,” Spencer said. “But there are those out there who are resorting to so much rage and anger, and simply because you’re born a certain color, you’re automatically targeted, and that’s not fair.”

On Saturday, protestors shouted as they boarded the ferry to Staten Island and arrived at the gathering location, “hands up, don’t shoot”—the slogan that demonstrators in Ferguson have used to oppose Brown’s death.

March participants also held signs and wore t-shirts that connected Garner’s death with others who died at the hands of police, such as Ramarley Graham, who was shot by New York City police in 2012 when officers thought he possessed a gun. He was later found unarmed.

The march, which began shortly after 12 p.m., from the spot on Bay Street where Garner died and ended at a rally staging area several blocks away, was marked early on by disorganization.

At one point before the procession began, parade marshals threatened reporters that they would call the police if reporters did not back away from the site of Garner’s death. Rev. Sharpton, who organized the event, and members of Garner’s family were expected to make comments at the site.

Sharpton told reporters that the march was aimed at telling the city to reform its policing methods. “It sends a message that we are not talking just polemics, that people are tired of the outrageous behavior of some police. It’s not an anti-police march, it’s an anti-police brutality march,” he said.

The march otherwise proceeded without violence or confrontation, despite some earlier concerns leading up to the rally that there might be tensions between locals and protestors.

Many businesses in the area had shuttered their doors and some curious neighbors looked on from rooftops at the crowd, but there was no significant interaction with locals.

Event organizers did not have a permit for the event, which drew about 3,000 people. Sharpton said last week that they had established “an understanding” with the police.

Police officers at the scene said that event organizers were in charge of controlling the crowds. About 200 police and community affairs officers were on hand.

At around 1:30 p.m., several faith leaders and organization representatives made speeches calling for equal treatment by police and an end to police brutality.

Speakers included Sharpton, president of the NAACP (National Association for the Advancement of Colored People)’s New York chapter, Hazel Dukes, and president of the United Federation of Teachers, Michael Mulgrew.

Members of Garner’s family also appeared to thank participants for their support. The family emphasized that they wished to seek justice for Garner’s death peacefully.

Garner’s eldest daughter, Erica Garner, said, “His voice is finally being heard and people are standing up and speaking for him.”

Esaw Garner, wife of Garner, said Garner’s death was not a racial issue. “They [the police] did wrong and they need to pay for doing wrong,” she said.