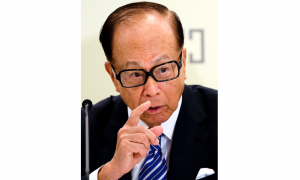 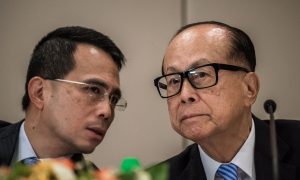 If you are not sure what to do, sometimes it’s an option to do what the most successful people do. So if you are not sure whether to keep investing in China or not, look at what Asia’s richest man Li Ka-shing has done since 2011. Only be careful not to alienate the Chinese regime in the process.

Li has been steadily diverting his empire away from China.

He sold roughly $16 billion of assets he held in China and moved the money into Europe, where he sees higher returns. His biggest sale was the Hong Kong-based pharmacy chain A.S. Watson & Co. ($5.7 billion for a 25 percent stake) and his biggest buy was the U.K.’s second-largest telecom company O2 ($15.8 billion).

His timing really could not have been better because the Chinese economy started heading south in earnest at the beginning of 2015. Over the years, Li managed to reduce his exposure to China in terms of operating profit to 30 percent and boosted Europe to 42 percent.

The problem is that the Chinese regime is not quite happy about the move: On Sept. 12, Liaowang Institute, a nonprofit institution affiliated to Xinhua News Agency, published an article titled “Don’t Let Li Ka-shing Get Away With It.”

In the article, the author Luo Tianhao writes: “As we all know, in China, the real estate industry and [political] power are closely tied together. Without political influence, it is impossible to do real estate business [in China]. Thus, I am afraid it is not wise to just walk away.”

Maybe that’s exactly the reason Li moved out of China and even Hong Kong. Besides, Li probably couldn’t care less, as he hardly has any real estate assets left in China.

“It seems that even people like Li Ka-shing are sensing they are losing their edge to the new princelings on the mainland,” said Edward Chin of pro-democracy group 2047 Hong Kong Monitor.

Chin also said the growing influence of the Chinese Communist Party in Hong Kong is scaring away business people and that a registration in Singapore or the Cayman Islands is safer from a legal perspective, especially if most of the assets are held overseas anyway.

To do this, Li merged the two conglomerates he controls (Hutchison Whampoa Ltd. and Cheung Kong Holdings Ltd.) into CK Hutchison Holdings Ltd. and promptly registered it in the Cayman Islands, rather than keeping it in Hong Kong.

The last move in this stratagem was to merge his H.K. power company (Power Assets Holdings) with his infrastructure company Cheung Kong Infrastructure (CKI) Holdings and delist it from the Hong Kong Stock Exchange. Because CKI is part of CK Hutchison, it will also be under Cayman jurisdiction in the future.