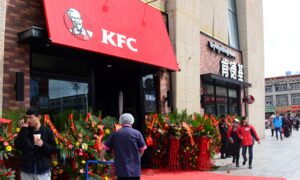 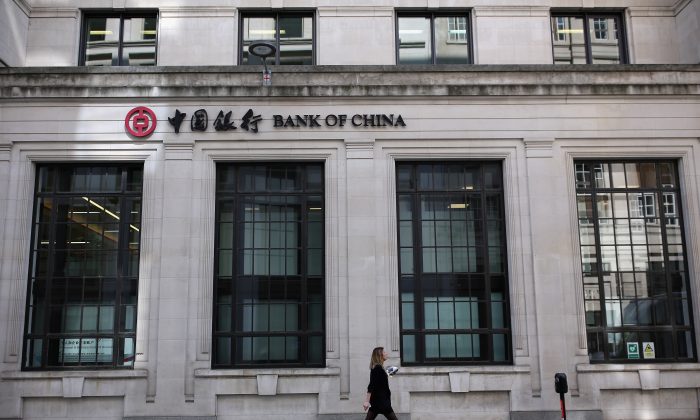 A Bank of China branch in the City of London May 13, 2016. Bank of China is one of a number of Chinese banks looking to expand their presence abroad. (Dan Kitwood/Getty Images)
China

Follow the Money: Chinese Banks on Course for Global Expansion

Enter Bank of China, China Construction Bank, and the Industrial and Commercial Bank of China. Chinese purchases of Australian real estate barely skipped a beat, as local branches of Chinese banks have stepped in to fill the gap.

Chinese banks are following their corporate and retail clients by expanding abroad, bucking a global banking industry trend of retrenching.

However, compliance and regulatory obstacles could slow their ambitions. And despite recent gains, their overall global footprint is unlikely to challenge current market leaders in the near future.

According to data from China’s Ministry of Commerce, China’s outward direct investment (ODI) rose to $103 billion between January and July 2016, a 61.8 percent increase from the same period last year.

The United States and Germany were the most popular destinations for Chinese foreign investment, driven by major corporate mergers and acquisitions.

Chinese domestic banks are attempting to ride this wave. At the end of 2015, more than 20 Chinese banking organizations had set up 1,300 locations across 59 countries and territories, according to data from Bank of China.

“Chinese banks’ overseas loans increased by more than $600 billion since 2010 to reach near $1 trillion at the end of 2015, and are likely to grow further with the government’s support for companies’ ‘go global’ policies,” wrote the IMF in an August report “China’s Growing Influence on Asian Financial Markets.”

China Construction Bank, its second-largest bank by assets, is looking to expand its footprint from 24 to 40 countries and increase foreign contribution of pretax profit from 1.7 percent as of 2015 to 5 percent by 2020, according to its Chairman in a recent speech in Hong Kong.

Among its peers, Bank of China has the biggest foreign operation, contributing to 23 percent of its pretax profit last year.

Chinese banks are pivoting abroad while established global banks are scaling back.

Ten years ago, New York-based Citigroup Inc. had a retail presence spanning 50 countries from Tokyo to Madrid serving almost 270 million people globally. But profit and regulatory pressures have caused the bank to close or divest operations in more than half of those locations, including Turkey, Guatemala, and Japan.

The retrenching at Citi, HSBC, and other global banks has been quick and dramatic. The goal is to get leaner by focusing on the most profitable customers such as high-net-worth individuals and multinational corporations.

That has also been a goal of Chinese banks—as wealthy consumers and both private and state-owned companies look for foreign assets, the banks have been there to lend.

There’s also a political component to the expansion. China’s state-directed “One Belt, One Road” initiative have forced Chinese banks to enter emerging markets in the Middle East and West Asia where the banks otherwise wouldn’t venture. That’s a major reason the “big five” Chinese banks have been ahead of smaller banks in expanding abroad.

Chinese banks have financed the majority of recent Chinese purchases of property and corporations in Australia. Loans originated by Australian branches of Chinese banks increased at four times the rate of growth for loans originated nationally during the first quarter of 2016, according to Australian government data. This has prompted regulators to warn that such rapid expansion by foreign lenders could become a systemic threat to the Australia’s financial system.

“One is duty bound to observe that there is a history of foreign players expanding aggressively in the upswing only to have to retreat quickly when more difficult times come,” Reserve Bank of Australia Governor Glenn Stevens said in a speech in Sydney in March. Stevens did not single out China specifically.

Lack of controls adhering to the more stringent foreign regulatory framework is another common risk facing Chinese banks with overseas aspirations. The U.S. Federal Reserve last month ordered the New York branch of the Agricultural Bank of China to improve its anti-money-laundering (AML) infrastructure after examiners found “significant deficiencies” in its AML controls.

While the Fed did not specify what the violations were, the regulator said on Sept. 29 that it had found major flaws in risk management — monitoring and combating illicit banking transactions — at the bank’s local branch.

Agricultural Bank of China is the latest example of Chinese bank having difficulties with U.S. AML and know-your-client rules. The Fed gave similar warnings last year to Bank of China and China Construction Bank regarding AML procedures.

And there’s reason for the heightened scrutiny. Global Financial Integrity, a Washington-based financial industry watchdog, estimated that between 2004 and 2013 China was the world’s biggest source of illicit monetary outflows, according to Reuters. China accounted for about 28 percent of the $4.9 trillion in illicit funds moving from the world’s ten biggest economies.

Despite the challenges, China’s “Big Five” banks are approaching 10 trillion yuan ($1.5 trillion) in combined overseas assets for the first time.

But they still lag behind their global peers in many respects and have inadequate business models. “The over reliance on interest income [at Chinese banks] as a profit model most definitely requires change,” according to a joint PwC-Renmin University study on internationalization of banks.

The banks generally focus on commercial and merchant banking, and do not offer a full product suite including asset management or investment banking like their international peers. As more countries and organizations use the yuan to settle payments, Chinese banks’ overseas influence and product portfolio could grow.

That’s the easy part. But Chinese banks lack the single most important element for any bank’s success: trust.

For Chinese banks, the business framework for global expansion is in place. The trust? Not so much.