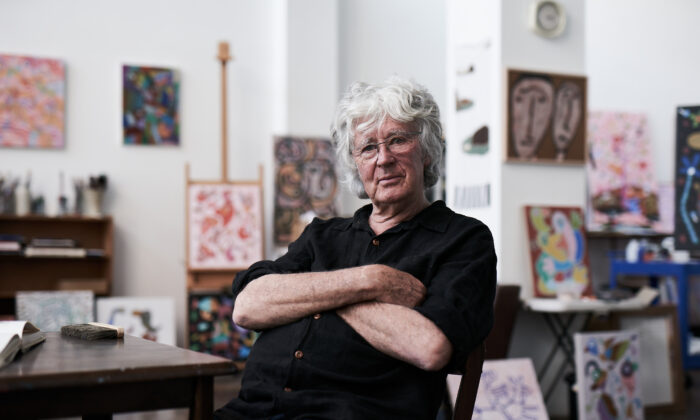 The artwork of prominent Australian artist, poet, and political cartoonist Michael Leunig was pulled from the planned posters of the 2022 National Folk Festival (NFF) for his views on the COVID-19 vaccine.

In a statement to The Epoch Times, the NFF board acknowledged Leunig’s importance in the Australian creative landscape but said the festival hadn’t been aware of his views on vaccination at the time of their collaboration and would be withdrawing the artwork.

“The National Folk Festival is strongly committed to respecting individual beliefs and opinions and the right to hold them,” the NFF statement said on Aug. 30. “However, there is a significant tension between Mr Leunig’s position and the National Folk Festival’s commitment to vaccination as one of the essential tools in enabling the Festival to go ahead in 2022.”

Leunig, who was declared a national living treasure in 1999 by the National Trust, told The Epoch Times that he had not been notified of the NFF’s decision and was shocked.

“They didn’t ask me. I wasn’t asked: ‘Well, what are your views?'” he said on Sep. 1, insisting that he was not, in fact, against vaccinations.

The artist explained that his position on COVID-19 vaccines was that any individual should follow their own instinct and understanding and that it was a person’s right to choose what they do with their body.

“I think there is something so radical and fundamental about that boundary which is our body. If people want to do it to make themselves feel better … good on them, I support them. I support anyone in their choice,” he said.

Leunig said that his views on vaccines had been misrepresented for many years, coming about after he published a drawing in the Fairfax media in 2015 that conveyed a message about the rights of parents to decide whether or not their children would be immunised.

“I did a cartoon, which essentially said don’t be too hard on mothers who have a stand on this. Go easy,” he said.

Leunig noted that he wasn’t trying to make an anti-vaxxer statement; rather, he was saying: “Get off people’s backs if they are having a conscientious kind of position and are trying to work it out.”

At the time, Australia was debating whether or not to implement mandatory vaccination for school-aged children. However, the cartoon prompted a backlash from some sectors that labelled his views dangerous, with Leunig telling Radio National at the time that he and his family had received death threats.

He also questioned how a folk music festival—a genre of music that grew out of traditional forms of music which were regularly used to make social commentary—could choose to silence someone’s art.

Leunig noted that he had experienced pressure for standing up for his beliefs previously, after being a conscientious objector to the Vietnam War. But he noted that recently more people in the public eye had been castigated for their presumed views, especially if they diverge from a prevailing social narrative.

“I was simply labelled that with permanent dye,” he said, referring to being considered an anti-vaxxer after the cartoon was published.

Leunig said it was part of his duty and his job as a political and social commentator to use his art to be a voice of intelligent opposition and to question what is going in society.

Despite the backlash, Leunig is prosaic about the recent censorship noting that the environment of today’s society requires more work to convey a message of sanity.

“I don’t think I censor myself, but I have to work three times as hard to convey sanity in a time of insanity,” the artist said. “I have to speak in metaphors and allegories.”

The NFF’s decision to cancel the artwork comes as Australia is experiencing a third outbreak of COVID-19—the Delta variant—in two states and one territory. The Greater Sydney region has seen a weekly average of around 1,000 new cases of community transmission per day.

Currently, both federal and state authorities are promoting vaccinations as a way out of the lockdown measures that are part of Australia’s national strategy to control the COVID-19 pandemic.

The National Cabinet—a national body made up of state and territory leaders, and the prime minister—agreed to a four-phased plan that requires each jurisdiction to implement measures to “accelerate vaccination rates” during Phase A, the current stage of the national plan.