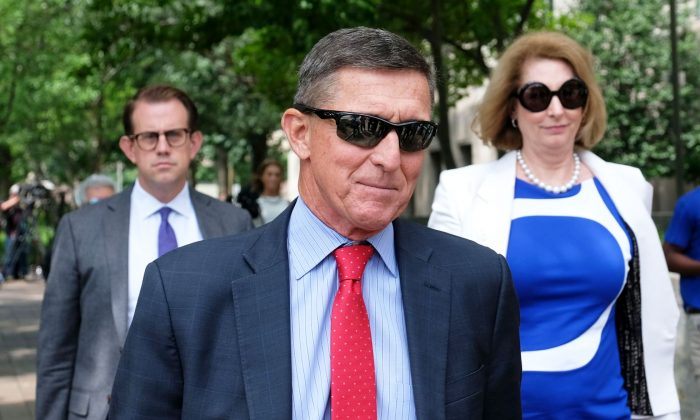 Attorneys for former national security adviser Michael Flynn launched a major legal challenge in his case on Aug. 30, by seeking a contempt citation against the prosecutors for hiding exculpatory evidence.

The attorneys allege Flynn was targeted for selective prosecution based on illegal surveillance and claim that the office of the special counsel extorted the guilty plea from Flynn.

Flynn plead guilty to lying to one count of lying to the FBI more than a year ago.

Sidney Powell, Flynn’s attorney, filed the paperwork for the motions two months after taking over as the defense counsel on the case, replacing the team that Flynn fired in June. Powell, a vociferous critic of government prosecutors, confirmed to The Epoch Times that she ultimately seeks for the case to be dismissed and for Flynn to be exonerated.

The 14-page filing represents the most significant development in Flynn’s case since he pleaded guilty to lying to the FBI more than a year ago. Flynn has postponed his sentencing since the guilty plea in order to complete his cooperation with government investigators, including then-special counsel Robert Mueller.

Should the judge side with Flynn on any of the requests, the repercussions would likely expand beyond Flynn’s case, since the defense is demanding for the prosecution to hand over evidence long shielded by the government. These documents—some which have been long withheld, while others are partly redacted—would shed light on the broader special counsel investigation into Russia’s interference in the 2016 elections, as well as the FBI counterintelligence probe from which it evolved.

The former national security adviser is seeking access to the redacted portions of text messages between former FBI officials Peter Strzok and Lisa Page, who exchanged text messages discussing an insurance policy in the “unlikely event” that then-candidate Donald Trump was elected president. Flynn is demanding access to the FBI interview reports for Bruce Ohr, the senior Justice Department official who acted as a conduit between former British spy Christopher Steele and the FBI after the bureau fired Steele for leaking to the media. Flynn also is asking the prosecutors to preserve all evidence—including the communications of the special counsel’s office—in the event they are removed from the case as a result of the contempt citation.

Powell, who authored a book on corruption within the Justice Department, levels several grave accusations against the prosecutors on the case, the special counsel’s office, and the broader criminal justice system. She accuses a pair of special counsel prosecutors, Andrew Weissmann and Zainab Ahmad, of interacting with Ohr—even though they had no business doing so—before their time on the special counsel investigation.

While providing few details, Powell alleges that the office of the special counsel, while suppressing exculpatory evidence, forced Flynn into a guilty plea by “putting excruciating pressure on him” and “controlling the press to their advantage to extort that plea.”

Powell also positions Flynn as a victim of a criminal justice system where government prosecutors have a major advantage over defendants. The filing hints that Flynn may be among a sizable group of people who plead guilty, even though they are innocent of the charges against them. She argues that while prosecutors often claim to comply with orders to produce exculpatory information, also known as Brady orders, “in truth, they often scoff at them and continue to play games to win convictions at all costs.”

“The government has a crushing 95% or higher conviction rate,” Powell wrote. “It is virtually impossible to defend successfully when the might and power of the federal government focuses on the destruction of an individual, and the government holds all the cards.”

While it’s too soon to tell what will become of Flynn’s filing, the confluence of Powell and U.S. District Judge Emmet Sullivan suggests at least a possibility that the case has several surprises in store. Sullivan once removed the prosecutors from a high-profile case against a former Republican senator from Alaska, Ted Stevens, for failing to hand over exculpatory evidence. The judge then overturned Stevens’s conviction, noting that the prosecutors’ conduct was “outrageous.”

Powell cited Sullivan’s work in the case as a key example in “Licensed to Lie,” her book about corruption in the Justice Department.

Meanwhile, Flynn’s indictment was the opening salvo in a battery of prosecutions by special counsel Robert Mueller, who turned up empty-handed after a 22-month hunt for evidence of collusion between the Trump 2016 presidential campaign and Russia. The origins of the Russia investigation have been under intense scrutiny by Justice Department (DOJ) Inspector General Michael Horowitz, who is close to completing an inquiry into how the FBI obtained a spy warrant to monitor former Trump campaign associate Carter Page. Meanwhile, Attorney General William Barr assigned U.S. Attorney John Durham to look into the broader Russia investigation that predated the spy warrant on Carter Page and included the use of government informants who targeted Trump campaign officials.

Sullivan scheduled a status hearing for Sept. 10, at which both the defense and the prosecution are likely to face questions about the many issues raised in the filing. The prosecutors have more than just the case on the line, since a potential contempt citation may have an impact on their careers. Powell, in the meantime, will have to reckon with a judge known for his tough questions for attorneys. She told The Epoch Times she doesn’t expect the judge to issue any orders before the status hearing.

The hearing will take place less than two weeks after the DOJ inspector general issued a report finding that former FBI Director James Comey broke department rules regarding the retention, handling, and dissemination of government documents. Comey, whose firing led to the appointment of the special counsel, leaked information to his attorneys that was later determined to be classified. The inspector general’s report disclosed, for the first time, that Comey used his first briefing with then-President-elect Trump on Jan. 6, 2017, to collect evidence for the Russia investigation and relay it to the FBI’s Strzok and Page.

The revelation buttresses Powell’s claim of selective prosecution due to the known anti-Trump biases of Strzok and Page, and Flynn becoming one of Trump’s top advisers at the White House. Strzok would go on to interview Flynn at the White House. Flynn pleaded guilty to lying to the FBI during that meeting.

Meanwhile, Inspector General Horowitz is expected to release his findings about the Carter Page spy warrant in the weeks following Sept. 10. Even before Horowitz’s conclusion, it’s known that senior FBI and DOJ officials approved the spy warrant application, even though it was based, in part, on the unverified “Steele dossier” compiled by the former British spy.

The officials signed off on the application at a time when the FBI was aware that Steele had a bias against Trump. The application also failed to disclose that Hillary Clinton’s 2016 presidential campaign and the Democratic National Committee funded Steele’s dossier.

Horowitz’s findings, combined with what’s already known, appears likely to echo Powell’s assertion that Flynn was the subject of illicit government spying. Powell claims that the evidence against Flynn may have been obtained via either illegal surveillance, an intelligence operation to smear him, or a criminal leak. She cites the documented abuses of the National Security Administration (NSA) databases, the release of Flynn’s conversation with the Russian ambassador to the media, and the illegal unmasking of U.S. citizens in 2016.

Powell also suggested that the investigation of Flynn resulted from an FBI and CIA operation that used Stefan Halper, a known intelligence asset, to smear Flynn as an “agent of Russia.”

“Judge Rosemary Collyer, Chief Judge of the FISA court, has already found serious Fourth Amendment violations by the FBI in areas that likely also involve their actions against Mr. Flynn,” Powell wrote. “Much of the NSA’s activity is in direct violation of the Fourth Amendment.”

According to Powell, the “most stunning suppression of evidence” in the case had to do with the prosecution’s withholding, for almost eight months, the text messages between Strzok and Lisa Page, an FBI attorney with whom Strzok was having an extramarital affair. The special counsel learned of the text messages in July 2017, but the prosecutors didn’t produce them until March 2018, after they had been released to the public. The prosecutors didn’t disclose to the court that Strzok had been removed from the special counsel team because of the bias expressed in his text messages. Weissmann and Ahmad also failed to inform the court of their work with Ohr, the defense claims.

The defense told the court in the Aug. 30 filing that the prosecutors on Aug. 16 handed over 330 pages of documents that count as Brady material, but refused to admit that the information is exculpatory. Since the government handed the documents over under a protective order, Powell filed a separate sealed memo explaining why the material counts as Brady evidence.

“Any reasonable attorney familiar with the allegations against Mr. Flynn would recognize that this evidence contradicts and undermines the prosecutors’ ‘theories’ of any wrongdoing,” Powell wrote.

“The production of August 16, 2019, also proves that the government has long had this information in its possession, all while the government has made an exhaustive effort to prosecute Mr. Flynn for three years or more,” she added.

Notably, on Aug. 30, the same day as the Flynn filing, the defense attorney in the special counsel case against Concord Management and Consulting LLC notified the court that the prosecutors handed over evidence that should have been provided over a year ago.

In making the demand for exculpatory evidence, Powell noted that she expects the actual evidence, rather than the summaries provided by prosecutors. In support of her argument, she cited the administrative court case against Adam Lovinger, a Department of Defense whistleblower who complained about the contracting practices of the Office of Net Assessment, including the $1 million in contracts issued to Stefan Halper, one of the intelligence assets who targeted the Trump campaign. The DOD suspended and then fired Lovinger on charges that included the mishandling of sensitive information. His attorney said the act amounts to whistleblower reprisal.

The Flynn filing claims that the government omitted the word “not” in the declassified version of a report by the Navy Criminal Investigative Service (NCIS) which exonerated Lovinger of allegations that he leaked sensitive information. Lovinger’s attorney, Sean Bigley, told The Epoch Times that the omission was a typographical error by the case agent, rather than an intentional act to change the meaning of the report’s findings. While the report exonerated Lovinger in its conclusions, the government nonetheless withheld the report until after Lovinger’s administrative trial.

The judge ruled against Lovinger. Months later, Lovinger forced the release of the NCIS report by filing a Freedom of Information Act lawsuit.

“Unfortunately, a lot of times they can get away with that type of behavior, and it’s not what I would say is the norm,” said Bigley, whose firm deals with security clearance cases.

“Within the realm of what we handle, which is very niche practice, it is difficult to have a level playing field because the government has infinitely more resources at their disposal.”

Correction: an earlier version of this article incorrectly characterized the underlying charges in Flynn’s case. The Epoch Times regrets the error.