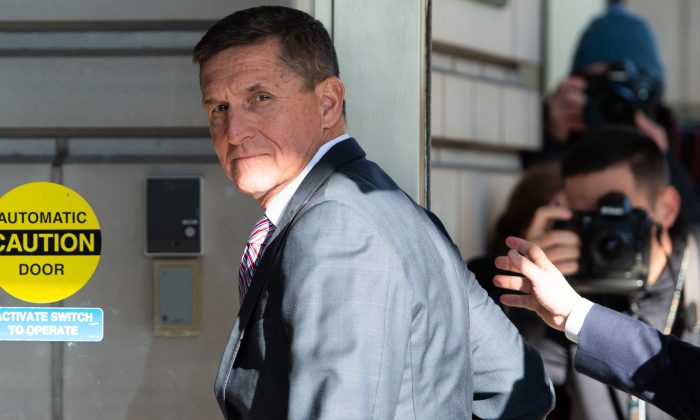 The attorneys for former National Security Adviser Michael Flynn called for a court intervention on Aug. 30 as the government continues to deny them security clearances required to view classified documents which they say likely contain exculpatory information.

“Our attempts to resolve that issue with the government have come to a dead-end, thus requiring the intervention of this Court,” the attorneys for Flynn state in a status report filed on Aug. 30.

“Our client held the highest security clearance the government provides. We know—but not in any detail because of our lack of clearance—that he briefed and debriefed the DIA [Defense Intelligence Agency] about his foreign contacts and travel. All that material is relevant to the charges against him, and it is most likely Brady [exculpatory] material to boot.”

The latest development in the case comes after Flynn fired his original defense team and retained a team led by Sydney Powell, an attorney known for her criticism of the Justice Department.

The judge in the case ordered the defense and the prosecution to file a status report on Aug. 30 to brief the court on the status of Flynn’s cooperation, whether the case is ready for sentencing, suggested dates for the sentencing and “any issues that would require the Court’s resolution prior to sentencing.” In the status report, the defense and the prosecution said they didn’t agree on any of the items and filed separate responses.

In response, the prosecutors claim that they have provided all versions of the 302 report and handwritten notes which are “in the government’s possession.” The prosecutors also claim to have “exceeded its discovery and disclosure obligations.”

Flynn pleaded guilty in 2018 to one charge of lying to the FBI. His sentencing has been delayed since, in part to allow him to cooperate with former special counsel Robert Mueller’s Russia investigation and a case against his partner from Flynn Intel Group. In his guilty plea, Flynn admitted to making false statements about a conversation he had with the Russian ambassador in 2016.

The defense team’s mention of the DIA may be a reference to a classified memo concerning Flynn’s trip to Russia. Sen. Charles Grassley revealed the existence of the memo months before Flynn’s indictment in response to press reports which insinuated that Flynn had questionable ties to Russia. Grassley called for the memo to be declassified “in the interest of fairness to Lt. General Flynn.”

Flynn was the first Trump campaign official to be charged by the special counsel as part of the investigation into allegations of collusion between the Trump campaign and Russia. The charge Flynn pleaded guilty to is unrelated to the alleged collusion. Mueller finished his investigation in March this year, concluding that there is insufficient evidence to establish that either candidate Donald Trump or anyone on his campaign colluded with Russia.