Flynn Evidence Unsealed: ‘Get Him to Lie So We Can Prosecute Him or Get Him Fired?’ 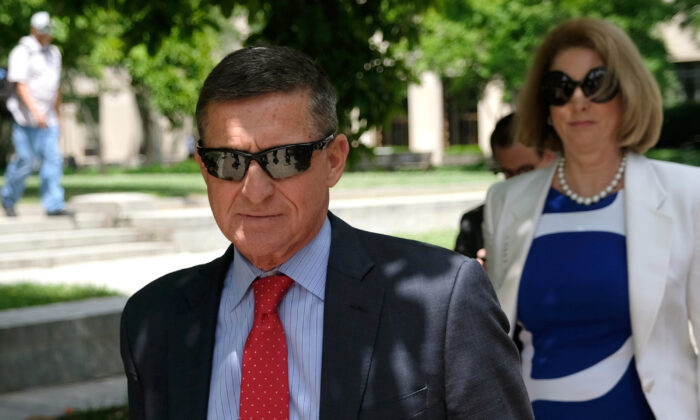 An FBI official involved in the decision to do a non-standard interview with Lt. Gen. Michael Flynn had questioned whether the bureau was trying to catch Flynn in a lie rather than get to the truth through their questioning.

Also released were several emails revealing that some of the officials involved in the interview had discussed beforehand the need to warn Flynn that lying to a federal officer is a crime. Flynn didn’t receive that warning during the interview.

Flynn, former head of the Defense Intelligence Agency and former national security adviser to President Donald Trump, pleaded guilty on Dec. 1, 2017, to one count of lying to FBI agents during the Jan. 24, 2017, interview.

The interview was aimed at Flynn’s phone exchanges with then-Russian Ambassador to the United States Sergey Kislyak.

The FBI seems to have had access to the transcripts of calls between Flynn and Kislyak, but some of the top FBI officials at the time, including then-Deputy Director Andrew McCabe, decided that Flynn shouldn’t be confronted with the transcripts if his recollection diverged from them during the interview.

Instead, the officials agreed on Jan. 23, 2017 that they would only use some key words from the transcripts and allow Flynn to fill in the rest according to his recollection, according to the emails.

Yet, at least one official questioned the suggested plan.

“What’s our goal? Truth/Admission or to—get him to lie, so we can prosecute him or get him fired?”

The official seemed to believe that they should confront Flynn with their acquired transcript and question him on that.

– with the goal of getting them to admit their wrongdoing

– I don’t see how getting someone to admit their wrongdoing is going easy on him.”

The FBI officials had developed a theory that Flynn broke the Logan Act by conveying to Kislyak the positions of the incoming administration on several diplomatic issues—including new sanctions that would see the expulsion of Russian diplomats and a United Nations vote on Israeli settlements.

Unnamed government sources then leaked the theory and information about the calls to the media, putting pressure on the Trump administration, which had initially denied that Flynn discussed the sanctions.

The Logan Act theory was bogus, according to Sidney Powell, Flynn’s attorney and former Texas prosecutor.

The 1799 Act prohibits Americans from conducting diplomacy on their own with countries that the United States has a dispute with. Nobody has ever been successfully prosecuted for violating the law. It was Flynn’s job, as part of Trump’s transition team, to establish relations with foreign officials.

The FBI official argued that if the FBI managed to get Flynn to admit to violating the law, the bureau should hand the matter over to the Department of Justice (DOJ) and let it decide how to proceed.

“Or if he initially lies, then we present him [redacted] + he admits it, [we] document [it] for DOJ, + let them decide how to address it,” he said.

The bureau was risking its reputation, he apparently warned.

The initials in the top right corner of the notes appear to be “EP,” which would match Priestap’s full name, Edward William Priestap.

In Flynn’s defense, Powell has argued that the lieutenant general never had any “relationship” with Russia that would warrant an investigation and that the whole process was a pretext to target Trump.

The notes and emails were unsealed by District Judge Emmet Sullivan at Powell’s request.

Two of the emails detail a Jan. 23, 2017, conversation between Lisa Page, McCabe’s then-special counsel, and an official from the bureau’s Office of the General Counsel whose name is redacted. They pertain to the policy on “admonishing” (warning) interview subjects that lying to a federal officer is a crime under Title 18 U.S. Code § 1001 for making false statements.

“[Redacted], I have a question for you,” Page starts. “Could the admonition re [regarding] 1001 be given at the beginning at the interview? Or does it have to come following a statement which agents believe to be false? Does the policy speak to that? (I feel bad that I don’t know this, but I don’t remember ever having to do this! Plus I’ve only charged it once in the context of lying to a federal probation officer). It seems to be if the former, then it would be an easy way to just casually slip that in. ‘Of course as you know sir, federal law makes it a crime to…’.”

“I haven’t read the policy lately, but if I recall correctly, you can say it at any time. I’m 90 percent sure about that, but I can check in the am.”

One additional email detailed over a dozen possible questions that officials thought Flynn might ask when called to attend the interview.

The email was sent by Peter Strzok, the FBI’s then-deputy assistant director for counterintelligence operations, on the morning of Jan. 24, 2017, to McCabe who made the interview request in a call to Flynn. Strzok would later co-conduct the interview with supervisory special agent Joe Pientka.

McCabe was to be ready to answer questions asking whether Flynn was “in trouble” or faced an investigation, and whether Flynn should inform the president about the interview request, Strzok wrote.

In reality, Flynn, who had readily agreed to have two agents over, was unguarded and jocular, and saw the agents as friends, Strzok said in a later interview report.

Powell said in an April 24 court filing that the evidence in the new material “proves” Flynn was “deliberately set up and framed by corrupt agents at the top of the FBI.”

Flynn had asked Judge Sullivan in January to allow him to withdraw his plea, alleging he only entered it because his former lawyers hadn’t represent him effectively at the time.

Judge Sullivan denied in December 2019 Powell’s request for a list of additional documents and for dismissal of the case.

New information, however, has been turning up in the case since then.

Trump fired Flynn in February 2017, saying he misled Vice President Mike Pence about the Kislyak calls. Pence was one of the officials who publicly denied that Flynn had talked about the sanctions.

Trump wrote on Twitter on March 15 that he was “strongly considering” a pardon for Flynn given the evidence.